Advocates make their opinions known during a rally at the Supreme Court. The justices split 4-4 on a challenge to the Obama administration’s deferred deportation programs, letting a lower court’s injunction of those programs stand. (Photo by Meghan Finnerty/Cronkite News) 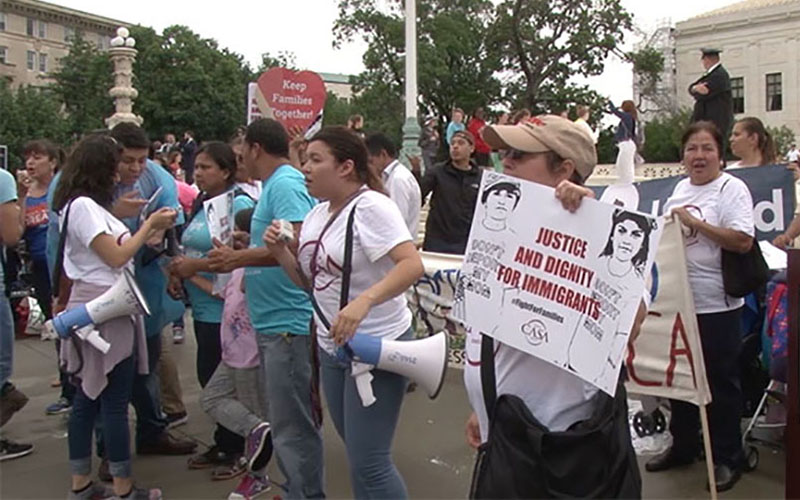 Immigration advocates rally outside the Supreme Court in anticipation of the court’s decision in U.S. v. Texas, a challenge to deferred deportation programs. The court let stand lower court rulings that put the programs on hold. (Photo by Meghan Finnerty/Cronkite News) 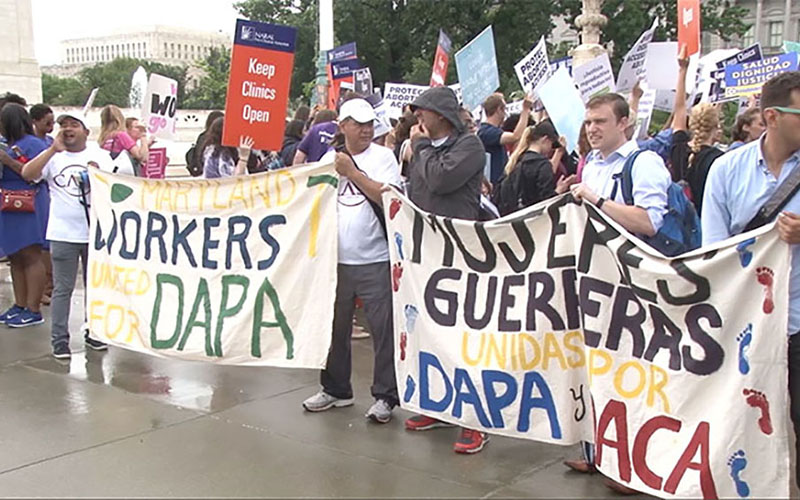 The mood at the Supreme Court quickly went from cheers to tears after the court said it would not overturn a ruling that prohibited the Obama administration from enacting and expansion of its deferred deportation programs. (Photo by Meghan Finnerty/Cronkite News)

WASHINGTON – Immigration reform advocates cried at the steps of the Supreme Court Thursday as they learned that the justices would not overturn lower courts that had blocked plans to defer deportation for millions of immigrants here illegally.

In a one-sentence ruling, the court said it was equally divided on the case and it was affirming lower-court rulings, an announcement that was called “heartbreaking” by one advocate in Arizona, where an estimated 104,000 will be affected by this case.

“It was like shock, like someone hit me in the gut a little when I saw the four-to-four tie,” said Alicia Contreras, an administrative relief coordinator for Promise Arizona.

But many Arizona Republican lawmakers applauded the decision in U.S. v. Texas, which they said repudiated an overreach by President Barack Obama.

“This decision further emphasizes that the president cannot rewrite the laws he finds problematic, nor skirt the separation of powers whenever he finds it convenient,” said Sen. John McCain, R-Arizona, in a statement from his office.

Obama called the deadlock “frustrating,” but emphasized during remarks at the White House that immigration reform would happen one day. He said that immigrants who have benefited from deferred deportation are “American in every way, except on paper.”

DACA, first unveiled in 2012, allows people with clean records who were brought to the United States illegally as children to apply for a temporary status that would protect them from being deported and allow them to get work permits, if they met several strict requirements.

Obama announced an expansion in 2014 and creation of DAPA, which would temporarily shield parents of U.S. citizens or legal residents, if the parents had lived in the U.S. since 2010 and met similar criteria to DACA applicants. The 2014 expansion would have affected about 104,000 people in Arizona, according to estimates from the Migration Policy Institute.

But a federal district judge in Texas temporarily blocked the implementation of those programs nationwide in 2015 and that injunction was upheld by the circuit court.

The Supreme Court’s deadlock Thursday does not affect people who applied for relief in the 2012 version of DACA, it only prevents the expansion – for now – of the program proposed in 2014.

Rep. Raul Grijalva, D-Tucson, said the outcome from the evenly divided court highlighted the need to fill the seat left vacant by the February death of Justice Antonin Scalia. Senate Republicans have refused to grant a confirmation hearing for nominee Merrick Garland until after a new president is elected in November.

“This does emphasize why the Republican refusal to confirm a ninth Supreme Court justice is so toxic to our legal system and our society,” Grijalva said in a statement.

“We are a nation of immigrants and a nation of laws, and both of those facts are betrayed by a political party that undermines the integrity of our highest court and attacks our president’s legal efforts to help aspiring Americans,” his statement said.

David Adame, president of Chicanos Por La Causa, said the decision affects not just immigrants, but that the entire country will feel its economic effects. He said immigrants contribute to industries like construction and agriculture and bring language and cultural skills to the workforce.

“That’s an asset and a resource that should be looked at as such, and not the immigrant bashing that goes on, (like) ‘They’re taking our jobs and immigrants don’t want to assimilate into our country,'” Adame said.

Carmen Cornejo, director of the Lacey and Larkin Frontera Fund in Phoenix, also said DACA helps the economy by letting people work and enroll in college.

“We can see that the DACA recipients been able to work and also participate in higher education at a very good rate, some of them are doing both,” Cornejo said.

Contreras said the focus now is on voter education and registration, so that Hispanics in Arizona will vote in November and help elect a president whose immigration policies they agree with. Promise Arizona also planned to hold a vigil for immigration reform.

“It was a glimpse of hope that they were going to have temporary relief,” Contreras said of the stalled DACA and DAPA programs.