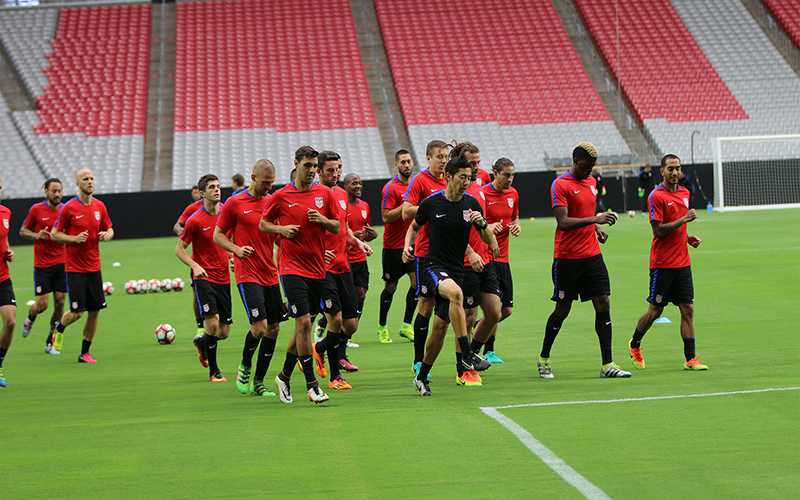 The U.S. Men’s National Team trains at University of Phoenix Stadium in preparation for its third-place game against Colombia. (Photo by Joseph Steen/Cronkite News)

“For the Mexico game it was absolutely insane,” Ruiz, the manager of Salt: Tacos y Tequila said. “We had lines out the doors, around the corner, the restaurant definitely had a record-breaking day.”

With the United States Men’s National Soccer Team coming to the area this weekend to play in Copa America’s third place game against Colombia Saturday, there is hope that at least some of that craziness will return to Glendale.

“Tickets are picking up with the U.S. and Colombia being here,” Rob Meyers, Copa America venue press officer, said during a U.S. training session Thursday at University of Phoenix Stadium. “(The attendance) is probably going to be between 30 and 40 thousand if I had to guess, but it could change. I know as soon as the U.S. lost the other night ticket sales spiked and Colombia has a pretty big fan base as well.”

The U.S. is looking to rebound from a 4-0 loss to Lionel Messi and Argentina Tuesday. The loss followed three straight Copa America victories – wins over Costa Rica and Paraguay in the group stage and a quarterfinal victory over Ecuador. Saturday’s game is a rematch of the U.S. team’s tournament-opening defeat at the hands of Colombia.

“You look at what everyone was saying before the start of the tournament,” midfielder Jermaine Jones said. “They said we wouldn’t make it out of the group, I think finishing third place would be good for us.”

This will be the first time the U.S. team has played in the Valley since 2014.

“We’re really excited for this game,” said Ruiz, whose restaurant will be hosting pregame festivities for the Phoenix chapter of the American Outlaws, a national fan group that supports both the men’s and women’s national teams. “Obviously with the USA playing out here it will be great for the community. There will be plenty of people coming out to watch the game I’m sure.”

Jones, who witnessed the energy that can surround the game while living in soccer-crazed Germany, said he hopes this tournament will help further the game in the United States.

“I think the whole tournament, especially what with we do with the team, helps this sport grow in the US,” Jones said. “It’s a process we have to work on, we know we’re not competing with the best teams yet. (But) over the years we have seen that we have gotten better and made the MLS better, so that is our main focus.”

The Mexico-Uruguay match was one of two Copa America group stage matches played in Glendale earlier this month. Although the Peru-Ecuador contest only drew about 11,000 fans, the Mexico-Uruguay game brought in about 60,000.

Across the United States, Copa America attendance has been a huge success, according to tournament officials, with a record attendance for the event of just under 1.4 million. They estimate the number will reach 1.5 million by the time the tournament comes to a close when a champion is crowned after Sunday’s championship match between Argentina and Chile. They also said that the tournament has also seen more than 3.5 million users across all social media platforms, which surpassed last year’s Copa America in Chile.

Fox Sports 1’s viewership for the USA-Argentina game was 3.29 million, making it the most-watched soccer game in the cable channel’s history. Between the Univision and Fox networks the game drew more than 8 million viewers.

The networks weren’t the only ones profiting from Copa America’s popularity. Local businesses like Salt gained new clientele and more notoriety by having the event on their doorstep.

“I don’t think a lot people knew that we were here,” Ruiz said. “With events like these it only helps out our business as well as many others in the area. Hopefully this encourages more people to take a trip out here.”