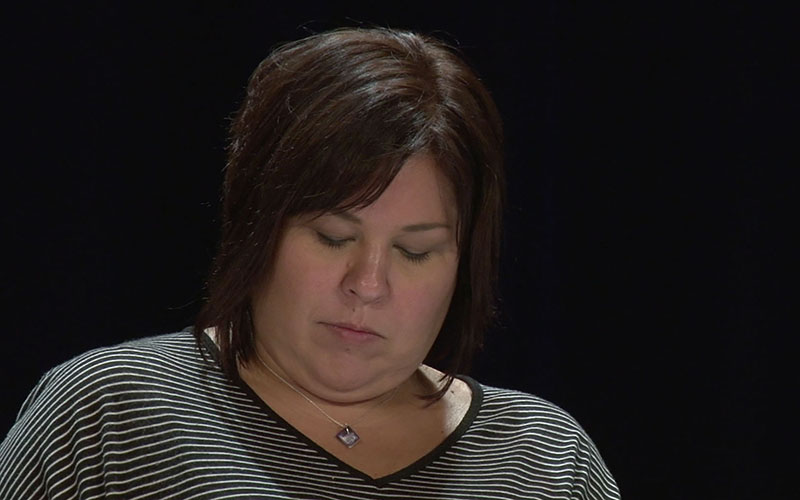 Billie Jo Rich, an Eastern Band Cherokee domestic violence survivor, tells her story during rehearsals for “Sliver of a Full Moon,” which dramatizes the plight of domestic violence against Native women. (Photo by Keshia Butts/Cronkite News) 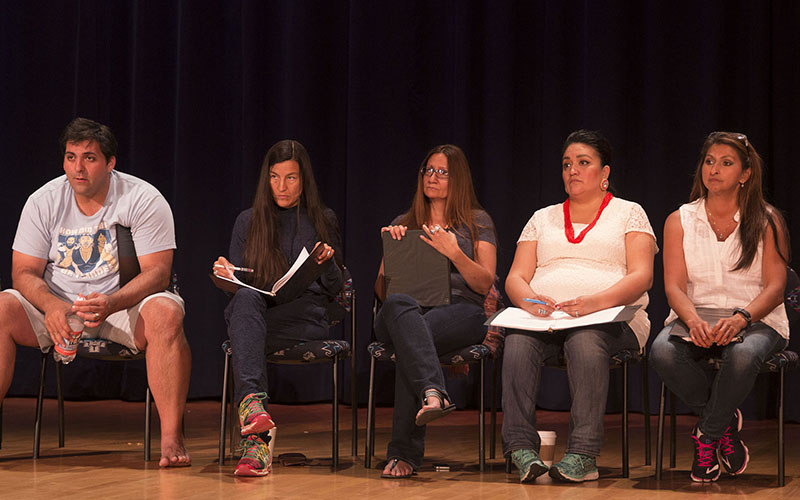 Jake Hart, Kimberly Norris Guererro, Lisa Brunner, Melissa Brady and Diane Millich, from left, at a rehearsal of “Sliver of a Full Moon,” a play dramatizing the problem of domestic violence in Indian Country. (Photo by Emily Zentner/Cronkite News)

Tanis Parenteau plays Deborah Parker, a former vice chair of the Tualip Tribes of Washington and a domestic violence advocate, during a rehearsal at the National Museum of the American Indian. (Photo by Emily Zentner/Cronkite News) 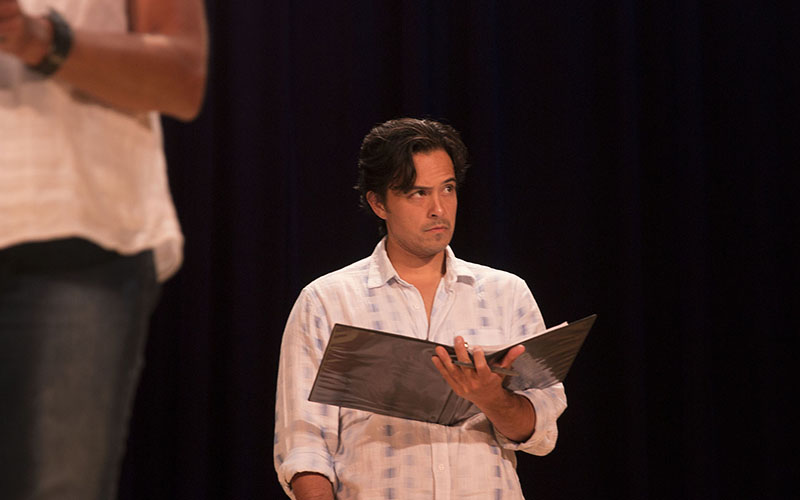 The Washington performance of “Sliver of a Full Moon” was the eighth for Jason Grasl, who portrays Dennis White Hawk, an advocate in the fight for the 2013 reauthorization of the Violence Against Women Act. (Photo by Emily Zentner/Cronkite News)

WASHINGTON – Billie Jo Rich never imagined she would be telling anyone her story of surviving domestic violence – much less a room with hundreds of people.

But the Eastern Band Cherokee woman took to the stage again Tuesday night, as she has for the last three years, telling her story alongside other victims who make up the cast of “Sliver of a Full Moon.”

The play was performed at the National Museum of the American Indian as part of an all-day White House event, the United State of Women Summit, which touched on everything from jobs to health to domestic violence.

The play recounts the struggle for the 2013 reauthorization of the Violence Against Women Act, which let tribal courts prosecute nonmembers for domestic violence against a tribe member. That’s a right Rich did not have when her then-husband, who was not a tribe member, beat her.

Cast members said it is a story that has to be told even though for some, like Rich, it took years to be able to tell it.

A photo caption that ran with an earlier version of this story misidentified one of the actors. Jason Grasl played the role of Dennis White Hawk in the play. The caption here has been corrected, but clients who used previous versions of the story are asked to use the correction that can be found here.

“When you’ve had to live like that, for some reason, you take this shame on,” Rich said. “It’s not your shame. I was just protecting his dirty secret.”

When VAWA was reauthorized, about 39 percent of Native women were victims of domestic violence compared to 27 percent of white women, according to estimates at the time from the National Congress of American Indians. And cast members think that’s a conservative estimate.

“The numbers are already high, but with how underreported it is, you can imagine how high the real numbers are,” said Melissa Brady, a cast member who belongs to the Spirit Lake Dakota tribe.

For Rich, the abuse occurred over the course of a few years during her marriage and subsequent divorce. But when she called tribal police to report the abuse, they told her there was nothing they could do.

Rich, who can’t swim, recalled how her husband once “stood in front of two police officers and said to me, ‘I’m going to put you in the water.’

“He was standing there telling the police exactly how he was going to kill me,” she said.

One attack in particular stands out. It is that story that she tells in the play.

After they had separated, Rich came to pick up their two young daughters for a visit when her husband became angry, kicking her repeatedly and knocking her down. As Rich rolled down their driveway, she knocked one daughter down.

Her husband took the girl, then 3 or 4, to the tribal police station, where he got a protective order against Rich after telling police that she had knocked their daughter down and was a danger to the children.

“I sat in that police department in torn clothing, with grass and leaves on my clothes and in my hair,” Rich wrote on the “Sliver of a Full Moon” website.

“I had a bruise forming on my side that would develop into an almost-perfect footprint from where he had kicked me, and the police told me there was nothing they could do because (he) was not enrolled,” she says in the play.

Rich’s story is one of four in the play, which weaves them together with actors playing members of Congress as they weigh the bill. The play, by Cherokee playwright Mary Kathryn Nagle, ends with the ultimate passage of the bill.

Another survivor telling her story in the play, Lisa Brunner, said that Native Americans are ideal victims for this type of abuse because they have historically been overlooked by the rest of the country.

“Predators feed off of vulnerabilities,” Brunner said. “When the government doesn’t recognize us … that’s the greatest vulnerability of all.”

Rich said it took her more than 20 years to get up the courage to tell her story, something she hopes other women won’t suffer if she tells her story in the play.

“I’m sharing a story that thousands of other women have experienced as well,” Rich said. “I can do it for them.”