The panel calling for a more civil public was just the most recent visit to Washington for former Arizona Rep. Gabby Giffords who continues to recover from a 2011 shooting in Tucson. (Photo by Sophia Kunthara/Cronkite News) 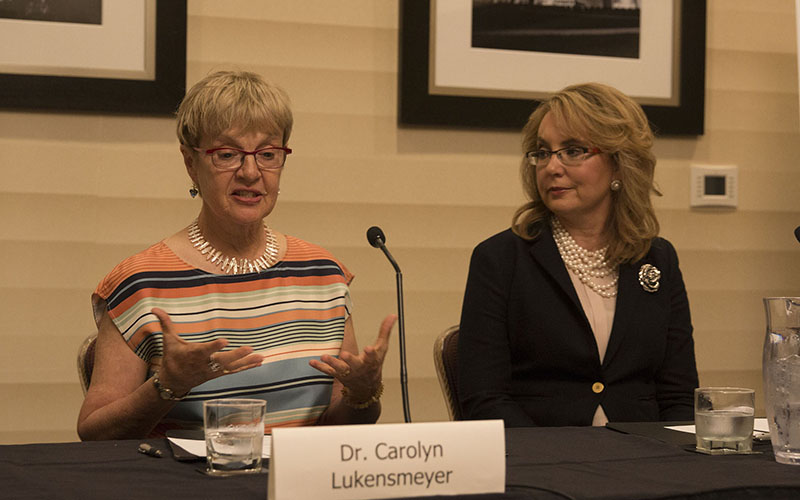 Carolyn Lukensmeyer of the University of Arizona’s National Institute for Civil Discourse said “we’ve never seen anything like” the bruising tone of campaigning as we have seen this year. (Photo by Sophia Kunthara/Cronkite News)

WASHINGTON – Former Rep. Gabby Giffords was back in Washington Thursday with her husband, Mark Kelly, calling for a more civil public discourse during a campaign season filled with what Kelly called “kind of historic poor rhetoric.”

Giffords and Kelly were on hand to help the University of Arizona’s National Institute for Civil Discourse launch its “Revive Civility” campaign, which aims to bring more respectful behavior to the 2016 campaign.

The 2016 campaign has seen widely reported taunts between presidential candidates in the primaries, name-calling, racial epithets and outbreaks of violence between supporters and opponents at some campaign rallies.

“We have become a very polarized country, not only nationally but here in Washington, D.C., in Congress,” Kelly said. “And polarization really kind of paralyzes us. And discourse that isn’t civil makes it even harder.”

He and Giffords joined former Oklahoma Republican Rep. Mickey Edwards and Ohio state Rep. Stephanie Howse, who are members of the advisory board to the institute. It was formed in the wake of the 2011 Tucson shooting that killed six people and wounded 13 others, including Giffords, who was the target of the attack.

The assassination attempt forced Giffords, a Tucson Democrat, to resign her seat in Congress in 2012 so she could focus on her recovery.

In sporadic visits to Washington since then, Giffords appears to have made steady progress. She did not speak at Thursday’s event, but walked unaided – if haltingly – to her seat on the panel and nodded in agreement to statements by the other panelists, interjecting a word or two on occasion.

Kelly, who spoke on Giffords’ behalf, said they were both dismayed by the current tenor of the national debate. He said it’s particularly important for both those in office and those running for office to behave respectfully.

“People who run for the highest office in the land have to realize whether they like it or not they are role models for young people,” Kelly said. “And they are accountable for what they say and to some extent they’re accountable for the actions of others. And we would all be in a much better place if everybody realized that.”

He added that candidates should be held accountable at the polls by voters.

“You don’t reward people for bad behavior,” Kelly said. “So when you see somebody that may be using angry rhetoric, don’t vote for them.”

Edwards said the institute’s focus has expanded from making sure there is civility between political leaders, to urging a standard of civility for the public as well.

“We’re not a Third World country, this is the United States,” Edwards said. “We’re based on freedom of expression, we’re based on free speech and free press and the ability to exchange ideas.”

Lukensmeyer said there is nothing wrong with opposing viewpoints and protests, both of which are deeply rooted in American tradition. But disagreeing with someone doesn’t mean being disagreeable – or event violent.

The Revive Civility campaign includes standards of behavior, social media tools to encourage respectable behavior, a “citizen toolkit” and the “civility seal of approval” to highlight particularly good discourse, according to the institute’s website.

Lukensmeyer said the current state of affairs developed over years and she knows it will take a long time to reverse the trends.

“We’re under no illusion that this campaign will not continue to be very negative and undoubtedly continue to give assignations to whole groups of people,” Lukensmeyer said, assignations that she called “just plain un-American.”

Despite the size of the task, she said, the goal is not that complicated.

“They’re the things our mothers taught us before we went to school,” Lukensmeyer said.