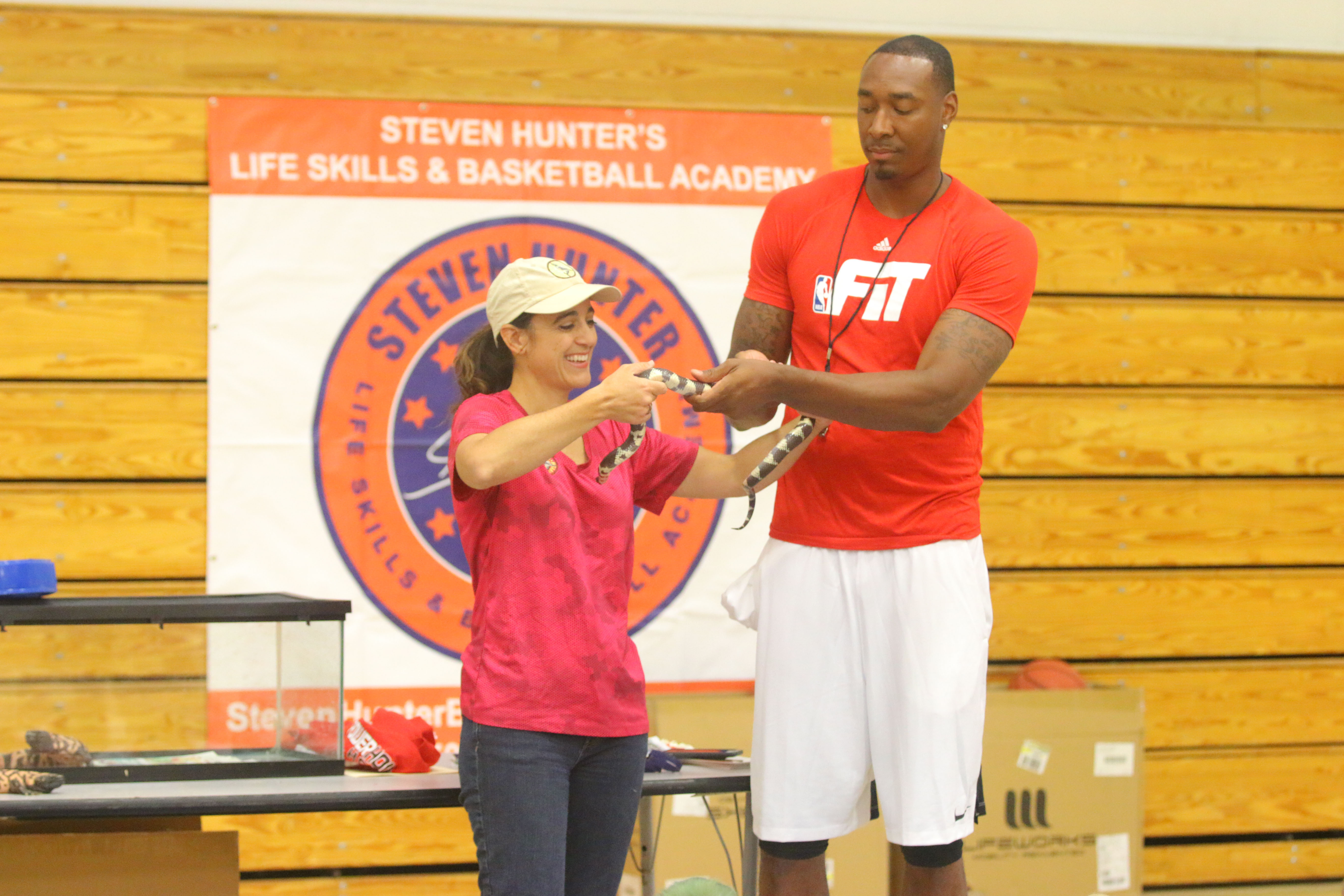 Steven Hunter and a member of the Arizona Game and Fish Department educate kids on animals in Arizona. (Photo by John Alvarado/Cronkite News)

Kelly Balzarini said he has learned a lot at the camp that will help him try out for his local basketball team in Mesa.

For the second year in a row, Hunter is hosting the camp at Fountain Hills Middle School for kids like Kelly-Balzarini, but basketball is only a part of the equation. The camp, which is managed by Hunter and his wife, Erika, as part of their Steven Hunter Youth Foundation, also teaches life skills.

“We strive to get tons of children involved and get them into sports. That is one of our goals,” said Erika, vice president of the foundation that was founded last year. “The other goal is not to have a regular basketball camp, to have a basketball camp that exposes them to etiquette, how to act as an athlete, manners, breathing and eating right, and all the important things that athletes need to have other than athletic skills.”

Some of the children attending this year’s camp are on scholarships funded by local businesses that Hunter and the foundation’s director of fundraising Donna Beers solicited.

When she took Hunter to ask local businesses to donate to the camp, Beers said they emphasized that it went beyond basketball.

“We started out with nothing this year and we just went door-to-door,” Beers said. “I really believe that once the word gets out there how exciting the camp is, how wonderful the speakers are and how awesome Steven Hunter is that people will want to donate.”

The first session of this year’s two-week basketball camp hosted nearly 100 kids, ranging from ages 8 to 14.

Following nine years in the NBA and one season in Italy, Hunter said that he decided to move to Phoenix because he enjoyed his time living in the Valley during the 2004-05 NBA season.

“Just that whole year was a positive experience,” Hunter said. “The fans are great here.”

He was a part of a Suns team that year that earned the No. 1 seed in the Western Conference playoffs and tied a franchise record with 62 wins.

He was named a community ambassador for the team nearly two years ago.

“It’s been a blessing to be a part of this organization again,” he said. “I’m just happy to be going to work every day for the Phoenix Suns and I’m happy to be working for the Steven Hunter Youth Foundation.”