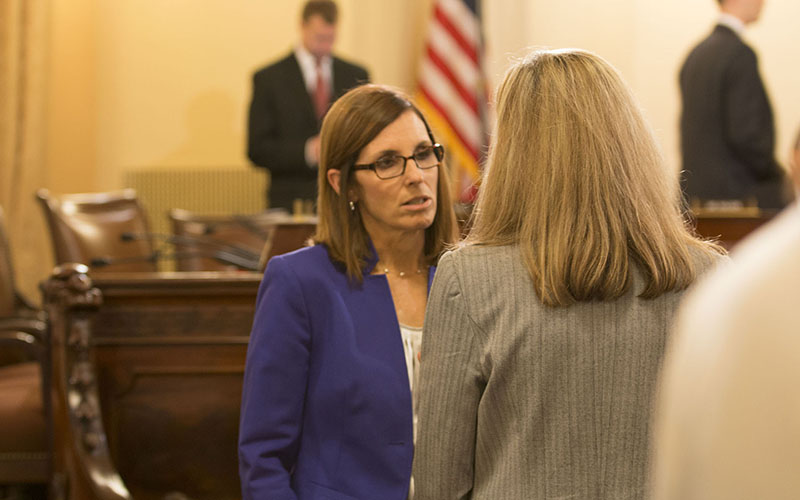 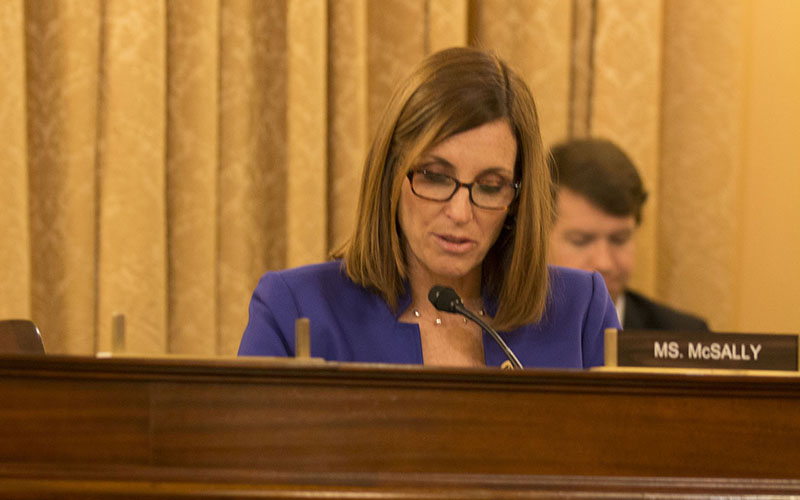 Rep. Martha McSally, R-Tucson, said that it “shouldn’t take an act of Congress” to get more TSA officers at Tucson International Airport and to expand hours for the airport’s PreCheck expedited security lanes. (Photo by Emily Zentner/Cronkite News)

WASHINGTON – Wait times at Tucson International Airport security checkpoints have grown steadily even as the number of passengers has fallen, an executive of the airport told a House panel Thursday.

Tucson Airport Authority President and CEO Bonnie Allin said a large part of the problem comes from a shortage of Transportation Security Administration staff during peak hours and a lack of local input into how those workers should be deployed.

Schedules for Tucson TSA workers are currently set by federal security directors in Phoenix, which she called a less-than-ideal situation.

“We don’t have the ability to react, because it is prescribed when these (security checkpoint) lanes will open,” Allin said, after her testimony to House Homeland Security subcommittee.

Her testimony came during the second of two days of hearings on security delays at the nation’s airports as the summer travel season begins.

TSA Administrator Peter Neffenger told lawmakers Wednesday that the planned hiring of more than 700 employees by mid-June would go a long way toward reducing wait times.

Representatives of airports and airlines at Thursday’s hearing agreed the increased staffing is an important element. But Allin said better coordination, and greater flexibility, is also key.

That has led to Tucson’s PreCheck lane being closed for all but about five hours a day, Allin said, aggravating security backups in the process.

“During our November-to-March high season, and particularly during our strongest season from January to March, we experienced 45- to sometimes more than 60-minute wait times at TSA,” Allin told the House Homeland Security Subcommittee on Transportation Security.

That compares to previous delays of 10-15 minutes on a typical day and a maximum of about 25 minutes on a bad day in the past, she said.

Allin said a cumbersome hiring process has also hobbled TSA operations in her airport. The TSA in Tucson lost 10 percent of its officers last May, and was not able to completely replace them until last month, she said.

At least some of the problem was laid at Congress’ feet by a union official who testified at Thursday’s hearing.

“Congress has cut personnel funding and capped the number of full-time employees TSA can have,” said J. David Cox, president of the American Federation of Government Employees.

Cox also said that, once they are hired, TSA officers “receive second-class treatment from their employer, the federal government,” which grants the agency’s workers less-liberal leave policies than other civil servants.

Allin said an expanded PreCheck program could lessen the burden on TSA officers, but that the enrollment system at the airport needs to be improved. She pointed to the system currently used at Syracuse Hancock International Airport, where agents bring the enrollment paperwork directly to travelers.

“Our enrollment center is currently off-site,” Allin said. “I want us to start enrolling people as they stand in line for security like they’re doing at the Syracuse airport.”