The head of the Transportation Security Administration, Vice Adm. Peter Neffenger, told a House panel that a hiring surge over the next month should let the agency boost efficiency at airports without shortchanging security. (Photo by Emily Zentner/Cronkite News) 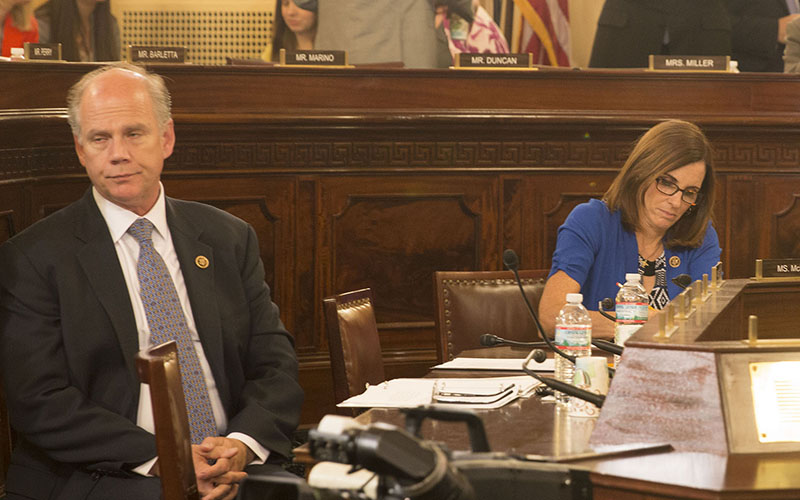 Rep. Martha McSally, R-Tucson, right, asked why TSA agents have been diverted from airport duty to do security screening at political rallies and other large events at a time when the agency has to hire hundreds more officers. (Photo by Emily Zentner/Cronkite News)

WASHINGTON – The head of the Transportation Security Administration promised lawmakers Wednesday that the planned hiring of 768 workers by June 15 will ease long wait times at airports nationwide.

Vice Adm. Peter Neffenger, who took over as TSA administrator last June, told the House Homeland Security Committee hearing that the hiring will allow the agency to improve efficiency without shortchanging security.

“Efficiency and effectiveness are not mutually exclusive,” Neffenger said in his testimony.

The moves come just as the summer travel season is gearing up, and follow high-profile TSA problems at several airports that have delayed fliers.

Rep. Michael McCaul, R-Texas, said TSA staffing issues have led to security screening wait times of up to three hours at some airports.

“This crisis didn’t just come out of nowhere,” said McCaul, the committee chairman, in his prepared statement. “Airports and airlines have been sounding the alarm for months.”

McCaul cited an incident at Phoenix Sky Harbor International Airport earlier this month when a TSA computer error caused 3,000 bags to be lost in one day. Other lawmakers pointed to ongoing problems with the TSA PreCheck lane at Tucson International Airport, which is periodically closed due to a lack of staff.

Lane closures mean those enrolled in PreCheck – an expedited screening program – are forced to go through regular security lanes.

“People pay for PreCheck and provide their biometric information and then they get to the airport and the lane is closed,” said Rep. Martha McSally, R-Tucson.

McSally said she is still waiting for a response to a letter she sent Neffenger on April 12. That letter asked about the PreCheck closures in Tucson as well as reports that TSA agents nationwide have been pulled away from their regular duties to do security screenings at campaign events, concerts and sporting events.

McSally said there have been more than 250 events where TSA agents have been pulled to provide security at other events. She questioned the practice at a time when the agency has to hire hundreds more officers.

“Where is the priority of supporting these events that have nothing to do with your core mission?” McSally asked.

Neffenger said that TSA provides this support under an Intergovernmental Service Agreement with the Secret Service, and that TSA keeps 75 agents on standby to assist with this type of security.

He said he cannot justify pulling agents off the main lanes at airports like Tucson to man the PreCheck lanes until there were “enough bodies” to sufficiently staff the main lanes.

PreCheck costs $85 and requires an FBI background check, among other steps that qualify travelers to use the fast lane.

Since his hiring as administrator, Neffenger has stopped the practice of randomly assigning PreCheck status to certain passengers, a move he said he made to increase security.

Neffenger thanked Congress for the extra funding to hire more officers. Lawmakers said they want to support TSA, but added that something must be done to fix the problems.

“It’s unacceptable for people to have to show up three hours early for a domestic flight,” said Rep. Bennie Thompson, D-Mississippi.