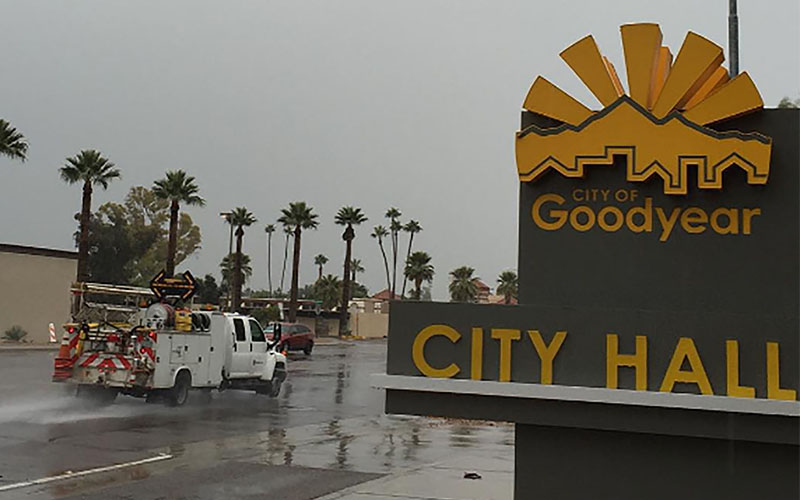 Goodyear posted the 14th-fastest growth rate in the nation from 2014 to 2015, growing 4.3 percent, the Census Bureau said. Buckeye was 15th on the list, also at 4.3 percent. (Photo courtesy City of Goodyear)

WASHINGTON – Two West Valley cities were among the fastest growing in the nation in 2015, according to Census Bureau estimates released Thursday.

While those cities grew fastest, Phoenix again grew the most in the state. The city added an estimated 24,614 residents, the fifth-biggest increase in the nation, bringing the Phoenix population to 1.56 million.

The latest numbers show a continuation of the steady growth in all three cities – but particularly in Buckeye, which conducted a special census in fall that showed the city had added 12,000 people in five years, according to city spokesman George Diaz.

Diaz said the city is currently experiencing “growing pains” from the population boom, but it has a good team at work on adapting municipal services and infrastructure to meet the growth.

“It’s been a challenge because our constituency has grown expectations as far as amenities,” Diaz said. “They’re coming, but it’s a slow process.”

Goodyear posted the sixth-fastest growth rate in the nation between 2013 and 2014, Lord said, which has positioned the city to better handle the growth.

“We’ve done the preparation because we know that people want to move here,” Lord said.

Goodyear has focused on improving the city’s infrastructure and making sure that city departments are working efficiently to meet the demands of a growing population, she said.

Business leaders in Phoenix said they welcomed the city’s growth, but were not surprised by the numbers.

“While many cities are struggling to keep people, Phoenix is struggling with what to do with the growth we’re experiencing,” said Jennifer Mellor, the vice president of economic development at the Greater Phoenix Chamber of Commerce.

Mellor said that having three Arizona cities near the top of the national lists for population growth “speaks to the vibrancy of our state,” a statement echoed by Lord.

Texas topped all states on the lists, with five cities among the 15 fastest growing and five among the 15 cities with the largest numeric increases.

New York City led the nation in growth overall last year, adding an estimated 55,211 residents to bring its population to 8.55 million. Georgetown, Texas, grew fastest, according to the Census, which said the town just north of Austin increased by 7.8 percent, bringing its population to 63,716.