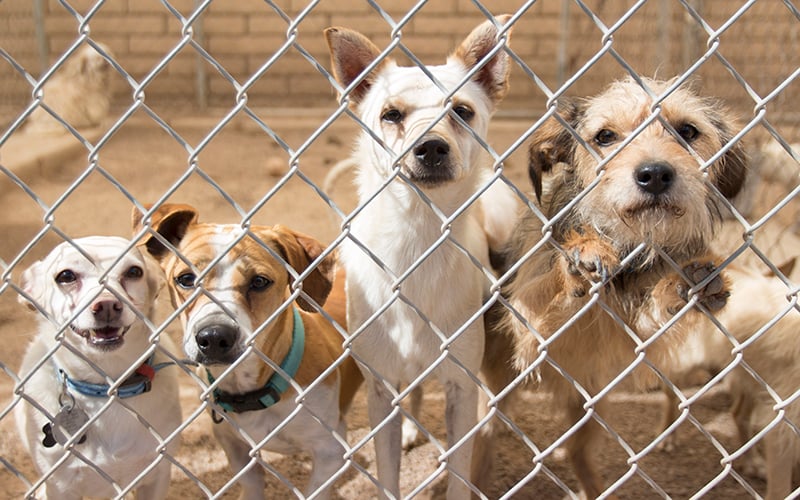 Of the dogs entering shelters, about 35 percent are adopted, 31 percent are euthanized and 26 percent are returned to their owners, according to the American Society for the Prevention of Cruelty to Animals. Dogs that were up for adoption at Ohana Animal Rescue in Tempe on April 14 peer out a fence. (Photo by Kaitlyn Thompson/Cronkite News)

There are about 338,600 licensed dogs in the county, according to data from Maricopa County Animal Care and Control, but some breeds are more popular than others.

Chihuahuas, Labrador retrievers and German shepherds make up the Top 3 breeds – and their presence is relatively consistent throughout communities in the county, according to a Cronkite News analysis of 2015 data.

And although pit bulls remain near the top of the list, experts said they aren’t always as accepted as other types of dogs.

That’s because people “have developed beliefs about breed-typical behavior,” according to Lisa Gunter, a graduate student of psychology at Arizona State University.

People perceive labradors as friendly, but pit bulls as aggressive, according to ScienceDaily.

Gunter recently published a study about breed perceptions – specifically focusing on pit bulls and pit bull mixes – and how that affects their adoption from animal shelters. The study was published in PLOS ONE, a science and medicine journal.

“People are choosing the dogs that they do primarily based on the way that they look, that likely breed labels in shelters may be altering people’s perceptions of certain dogs and influencing adoptions,” Gunter said.

Appearance could play a big role in the popularity of the Chihuahua, with the small, big-eared dog reigning in at the No. 1 spot for most common breed in Maricopa County.

Chihuahuas make up about 12 percent of the licensed dogs.

“We see a lot of Chihuahuas and even being the most popular, we still run into issues getting them adopted because they’re everywhere,” said Marissa Jackson from Arizona Small Dog Rescue in Phoenix. “The most common story we hear is ‘Oh, I went to this shelter and all they had was Chihuahuas.’ We’re always full of Chihuahuas.”

There’s a reason these little dogs are so common in the Phoenix area, Jackson said.

“A lot of people say it’s because we’re so close to the border of Mexico, but I think it’s just a lot of breeding problems,” Jackson said. “People get the Chihuahuas as puppies and don’t understand the importance of spaying and neutering, and all of the stray dogs around are Chihuahuas, and they start repopulating. And now we’ve got hundreds of them.”

Shawn Seppala from Scottsdale Pets’ Hotel said Labrador retrievers and mixes of the breed are the most common they see, calling them the “hot ticket” for the area.

Hal Herzog, a professor of psychology at Western Carolina University, examined why people choose the types of dogs they do by examining the kennel club’s records of over the past 50 years.

He suggested that people adopted dogs based on trends – and not utility like they once did, according to the university.

One writer for Slate tied the lab’s popularity to increasing sizes of American homes, saying larger areas allow opportunities for the dogs to “romp around.”

Yvonne Isabella from Camp Bow Wow, a dog day care in Peoria, said she primarily sees Labrador retrievers and German shepherds, the third most popular dogs in the county. Of all registered dogs, 5.4 percent are German shepherds.

“I think it’s primarily because labs and German shepherds tend to be really great dogs and well behaved,” Isabella said.

The pit bull represents 4.39 percent of dogs in the county.

Deanna Arroyo, from Ohana Animal Rescue in Tempe, said the reason pit bulls are so commonplace in her area is because of a lack of homeowner restrictions.

“You have older homes (in Tempe) with bigger yards and more shade, so you’ll be more likely to see dogs that can live out in the backyard,” Arroyo said “Certain areas won’t permit so-called high-risk or vicious breeds. This area doesn’t have restrictions, so you can have what you want here.”

Pit bulls are not the only breed that can be aggressive, said Perla Chapman from Ohana Animal Rescue.

“It can be true of any breed, it’s not just pit bulls,” Chapman said. “They are completely misrepresented in the media. Some of the most heinous crimes weren’t even committed by pit bulls.”

Gunter’s study focused on pit bulls and lookalikes at shelters. About 83.3 million dogs live in U.S. households, and about 20 percent were adopted from animal shelters, according to her study, which cited the American Pet Products Association.

The study suggested that if a dog is labeled as pit bull in a shelter, their length of stay in that shelter was lengthened significantly.

She wrote that negative perceptions of pit-bull type breeds developed from reports of aggression toward humans, a history of dogfighting and an “intensity of destructiveness.” But she noted that people often mischaracterize the dog breed.

The data from the Maricopa County Animal Care and Control contained only dogs registered within the three years.

Spokeswoman Cecile Holguin said it is difficult to determine just how many dogs are in the county because of the number that go unregistered.

Dogs in Maricopa County are required to be licensed and receive rabies vaccination once they turn three months old.

“The only ones we can track are those that are reported to us in our system,” Holguin said.

The data also may contain inaccuracies because the information is self reported, so an owner might categorize a dog as a certain breed, but it could be a different breed or a mix.

Gunter said that a majority of dogs in animal shelters are not purebred.

“A study that we’re getting ready to publish suggests that, at one shelter here in the Valley, that over 97 percent of the dogs were not purebreds,” Gunter said. “In fact, most dogs were comprised of more than two breeds.”