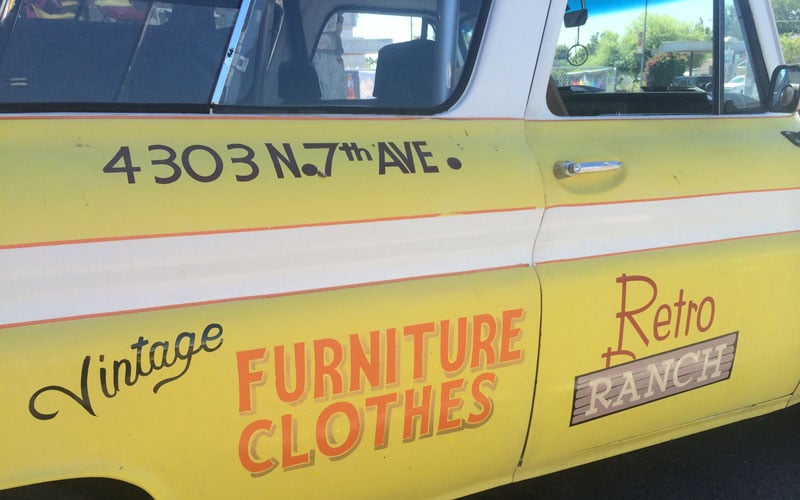 A bright yellow car sits outside of Retro Ranch, welcoming customers into the store. (Photo by Stacia Affelt/Cronkite News) 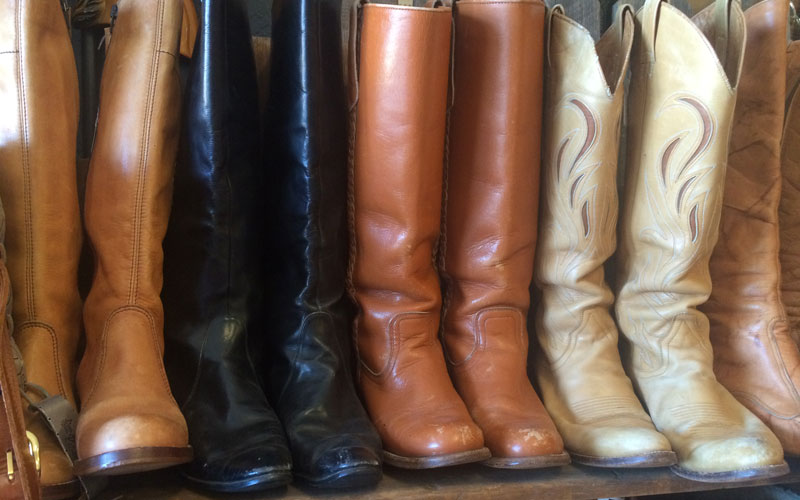 A wall of vintage cowboy boots stands at the entrance of Retro Ranch. (Photo by Stacia Affelt/Cronkite News) 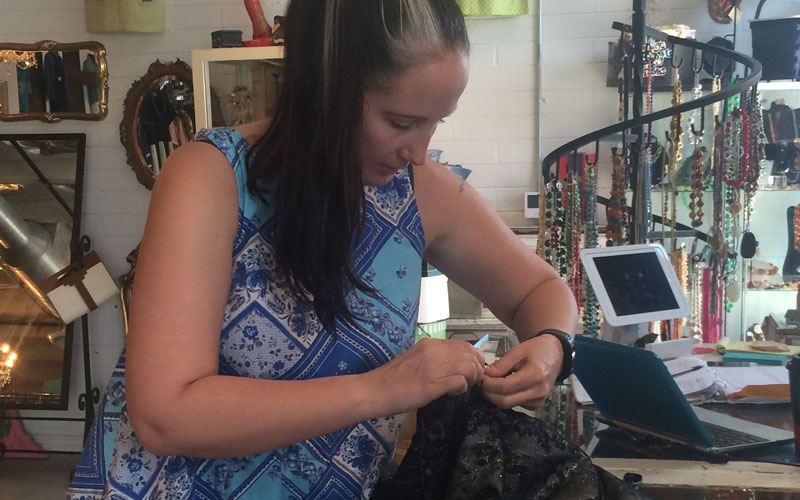 Antique Sugar’s co-owner, Sarah Bingham, fixes a broken zipper on a vintage dress. “It’s just better than having a real job,” she said of owning the store. (Photo by Stacia Affelt/Cronkite News) 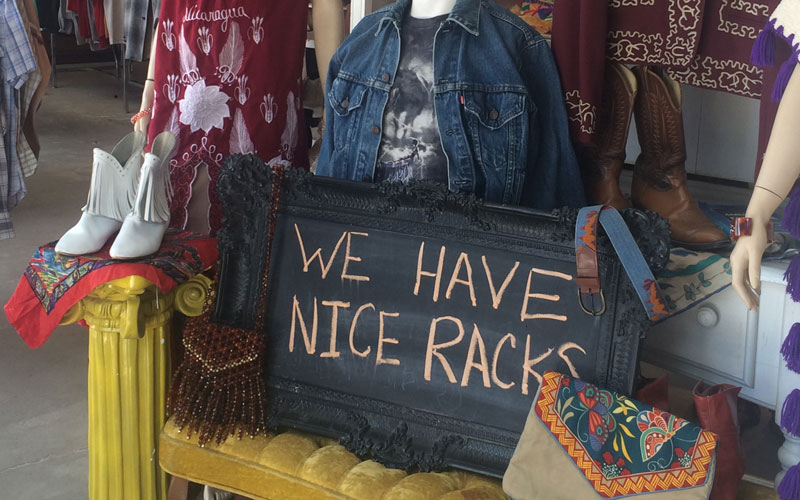 Antique Sugar is filled with men’s and women’s vintage clothing, such as ’70s bell-bottoms and ’80s prom dresses. (Photo by Stacia Affelt/Cronkite News) 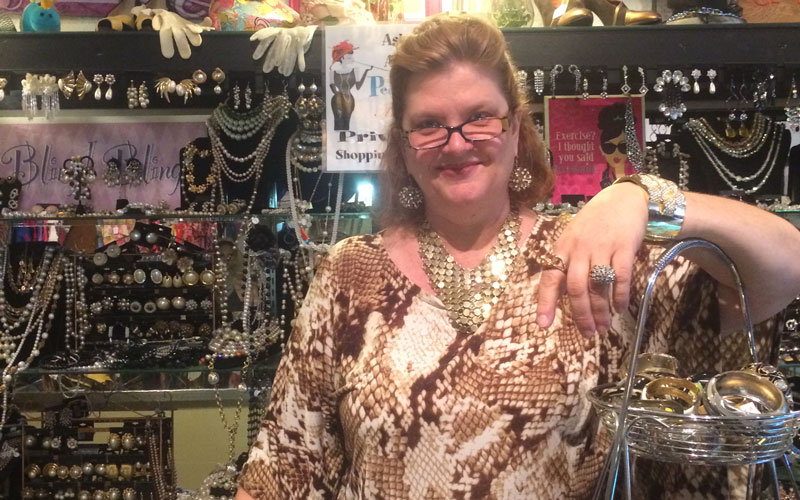 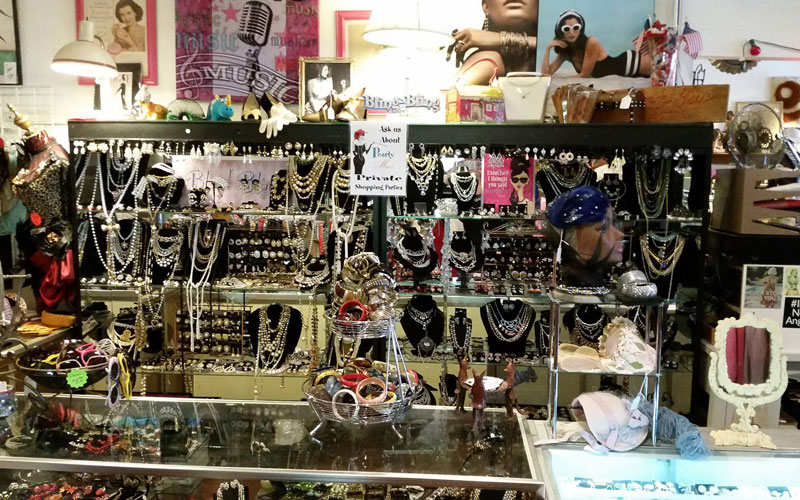 “Crazy decorating is my thing,” Wiesley said of decorating Pearly Mae’s. “Throw some pearls into the mix, and we’re all good.” (Photo courtesy of Jeanne Wiesley) 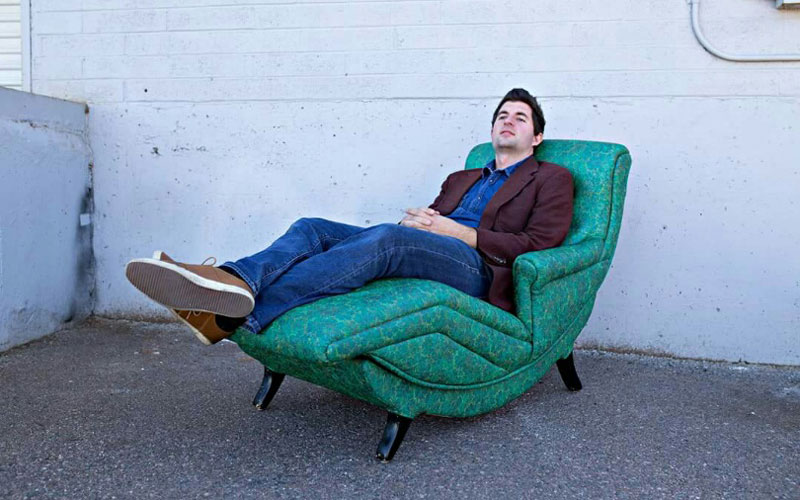 Michael Hardesty, owner of Zinnias at Melrose, shared this photo of a vintage lounge chair on Instagram. “I’d like to think we’re a little more laid back than other stores,” he said. (Photo courtesy of Michael Hardesty) 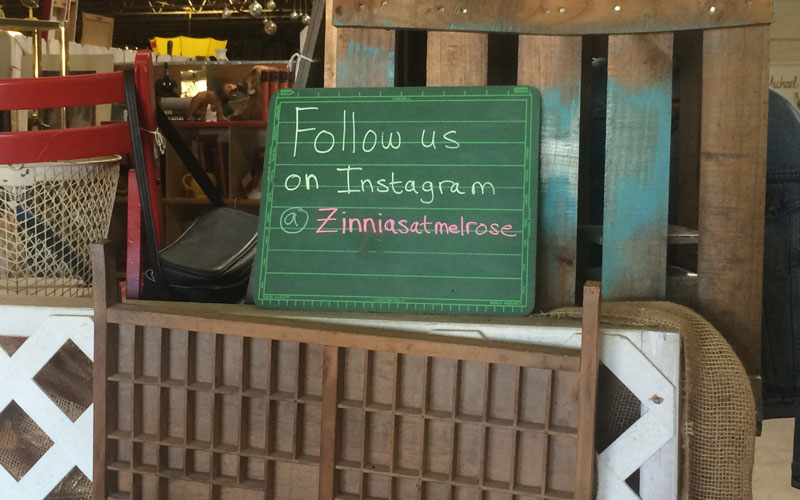 Zinnias at Melrose didn’t have a social media presence before Hardesty took over. Now, the majority of the store’s advertising is through Instagram. (Photo by Stacia Affelt/Cronkite News)

The Melrose District, nestled between Camelback and Indian School roads, is a place to shop for vintage clothing and antiques, eat at locally-owned restaurants and service your car at an old-school auto body shop. It might stick out like a sore thumb in comparison to the new developments downtown, but that’s exactly what has made the district so successful over the years.

Melrose prides itself on being “a shining star in the Metro Phoenix area,” but what really shines is the rich vintage culture there. What makes vintage work so well in the Valley? Some store owners in the district say it’s because of Phoenix’s unique history, the supportive community and being able to adapt to change.

More people are buying and selling vintage artifacts than ever before, according to a study by The Association of Resale Professionals. In fact, the U.S. resale industry has seen an average growth of 7 percent each year since 2012. Many cities have hopped on the vintage trend, and Phoenix in particular has become a destination for some of the best quality vintage at a cheap price.

Arizona’s southwestern roots make it a prime location to find vintage vests, cowboy boots and denim. Phoenix specifically is well-known for its mid-century modern architecture, which makes vintage furniture highly sought after too.

“A lot of people have ranch-style homes, and the furniture works in it because it’s scaled properly,” she said.

“People come here to retire from all over the country, and then when they get here they have all their fabulous clothes,” she said.

Due to the abundance of vintage clothing in Arizona, Bingham said store owners can afford to sell their merchandise for cheaper prices than you’d find in Los Angeles or New York.

“And the climate’s really good…we don’t lose a lot of our stuff to rot because it’s dry here,” she said.

The tight-knit community within the Melrose District is another reason vintage culture has lasted in the Valley. The majority of the district is made up of passionate small business owners as opposed to “big boxes,” as Hunter calls them.

“A lot of those are vintage and antique shops, and you kind of feel like that’s our tribe,” she said.

Bingham said she’s been to other towns where the resale industry is cutthroat, but that’s not the case in the district.

“We actually go out for cocktails with all the shop owners often,” she said.

Jeanne Wiesley, the owner of Pearly Mae’s, agreed that the Melrose community is uniquely friendly. Wiesley moved her store to the district in 2014 and said she was instantly welcomed with support.

“Everybody encourages everyone else’s success,” she said.

For instance, if she doesn’t have an item that a customer is looking for, Wiesley said she will happily send them to another store in the area because they would do the same.

Michael Hardesty said he experienced a similar camaraderie when he bought one of the largest vintage stores in the district, Zinnias at Melrose, in 2009. Hardesty even received advice from some of the shop owners on the ins and outs of the neighborhood and how to make his business last.

Adapting to a changing environment

Despite the district’s overall success over the past two decades, not all businesses have stood the test of time.

“Stores are going to come and go, and that’s not necessarily a red flag,” Hardesty said. “It’s just life.”

“Everything’s changing all the time,” Hunter said. “You pretty much always have to stay on your toes and be aware of what’s going on.”

One way Hunter and the other store owners have kept their businesses alive is by going online to cater to a younger demographic. For some of the owners, the prospect of going online is intimidating initially, given their longtime comfort with in-person interactions. Even so, having a digital presence has helped financially.

Wiesley said she recently started selling more of her inventory through Ebay and Etsy accounts during the summer.

Another way vintage stores in the district have adapted is by pushing heavily on social media. In lieu of print advertising, Hardesty said he advertises aggressively on social media and through email campaigns.

“Social media has helped a lot and really developed our brand,” he said.

For stores that make a living off of vintage artifacts, developing a strong brand is particularly important with all of the new development downtown. Fortunately, the vintage store owners see more opportunities from Phoenix’s development than threats.

Bingham, who recently relocated her store from the district to a new downtown building, said business is better than ever. In fact, she credits the changing environment to some of the store’s recent success.

“I say the more people the better,” Bingham said.

Wiesley moved to Phoenix in 1979, when she said people hardly ever went downtown. With the recent revitalization taking place, she’s shocked to see so many people walking around.

“I would rather have a high-rise there and show growth and potential in what our city can be to young and old,” she said.

Hunter is also in support of the developing culture, but cautions against too much change.

“I know that they’re building up downtown, but we still have to take care of the culture and the small business and not make it too corporate,” Hardesty said. “People are in business to make money, so it’s tough.”

Phoenix’s recent cultivation coupled with the need to grow digitally to continue making profits presents new-age opportunity to an old-age culture. But with a supportive community and unique history to back it up, the owners believe Phoenix’s vintage culture will continue to prosper.

“I think there’s always going to be a place for vintage,” Wiesley said.