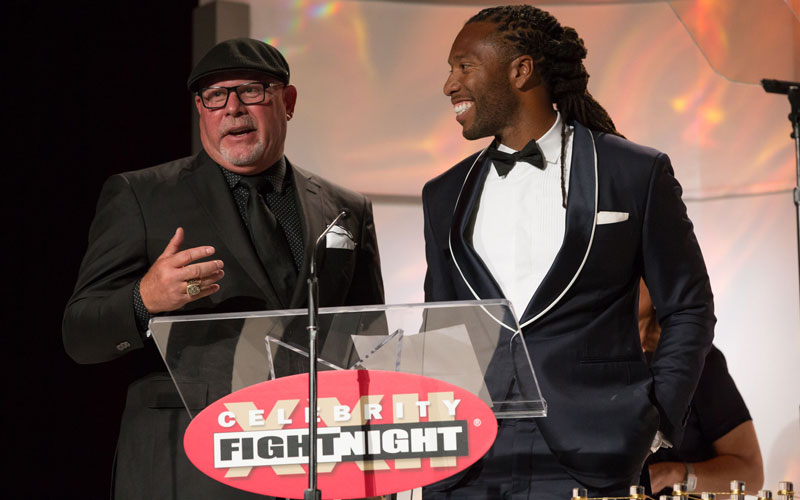 That fighting spirit lives on today in his crusade against Parkinson’s disease, which the Louisville native has battled for three decades. It’s evident in his support for the annual Celebrity Fight Night, an event that has been held in Phoenix for 22 years and has raised $118 million for various charities, including the Muhammad Ali Parkinson Center at Barrow Neurological Institute.

“With Muhammad Ali’s platform, he’s able to bring such a magnificent crowd of people together to support the cause and to help magnify his effort times 100, times 1,000,” said actor Quinton Aaron, star of “The Blind Side.”

“This is the only event like this,” Arizona Cardinals quarterback Carson Palmer said at this year’s event, held April 9 at the JW Marriott in Phoenix. “There’s a lot of different charities and fundraisers, and golf tournaments, and my wife and I have been to hundreds, but this is second to none, this is run first-class from top to bottom. They’ve raised $118 (million or $120 million) …in 20 years, which is spectacular. It’s just a very cool event.”

Rasheda Ali-Walsh, one of Ali’s children, said her father’s confidence inspired those around him, especially the African-American community.

“At that time it was very unheard of, unspeakable really, for African-Americans to come out and brag about how great they were and how pretty they were,” Ali-Walsh said of the man known in his early days as the Louisville Lip. “That was unheard of – really never even touched on. So a lot of African-Americans really started to believe in themselves because he did. So he changed a whole race of people.”

In 1984, at age 42, Ali was diagnosed with Parkinson’s disease, sparking his support of Parkinson’s research and inspiring celebrities to join him.

“One of his greatest gifts to the world was opening up the Muhammad Ali Parkinson Center there in Phoenix and also creating the Muhammad Ali Center in Louisville, Kentucky,” Ali-Walsh said. “And I know those two establishments, two impacts on the community, have not only served him well but also his community.”

Jimmy Walker, a longtime friend of Ali’s who created Celebrity Fight Night, is a member of the board at Barrow Neurological Institute. He said that 100 percent of the funds from Fight Night goes towards the Ali center at Barrow, which he called one of the most respected Parkinson’s facilities in the country.

“A lot of credit goes to Muhammad Ali because of the respect that people have for him,” Walker said. “It’s a very important center for him, where he gets treatment, too.”

There are between 7 million and 10 million people worldwide affected by Parkinson’s, a disease that affects the nervous system and can lead to tremors, loss of motor skills and other problems as it progresses. There are treatments but no cure.

“When it hit Ali, I think sometimes God picks our most invincible people, our most powerful people, like Magic with (HIV), Ali with Parkinson’s, like wow, it can take him, it can take anybody. It makes it more important,” comedian Sinbad said at Fight Night.

Ali has a storied Olympic history. Not only did he win a gold medal for boxing in the 1960 Rome Olympics, he made a name for himself in the Olympic village. Even as a young man, Ali stood out for reasons outside of his boxing ability.

“When you look at him at 18 years old, at the Olympics, even then he was quite the showman,” Ali-Walsh said. “It was said that he wandered the Olympic village shaking as many hands as possible like a politician on the campaign trail.”

He inspired again at the 1996 Atlanta Olympics, 14 years after being diagnosed with Parkinson’s, when he was invited to light the Olympic cauldron.

Ali was, and remains, a humble, friendly man, those who know him say..

“He had a tendency to say hello to everyone,” Ali-Walsh said. “That was, I think the start of him being nicknamed the people’s champion, because my dad, even before he converted (to Islam) and changed his name to Muhammad Ali, even as Cassius Clay, his personality was apparent, that he sought out people instead of the other way around.”

It was Ali’s religion that led him to refuse to serve in the Vietnam War after he was drafted, a decision that led to him being stripped of his heavyweight title and banned from boxing for three years in the prime of his career. But he also recognized what he believed in was more important than any title, Sinbad said.

“He spoke and people believed what he spoke,” Sinbad said. “He walked the walk. He talked the talk. He did not go to war. He lost three years, probably the best three years of his career.

Ali has passed his confidence and love for people down to his family.

“Even at the start, my dad had such a great belief in himself and he had confidence and he loved people.” Ali-Walsh said. “As that transcended into his career, it really gave not just us courage to stand up for what we believed in, but it gave the world, it gave Americans, especially African-Americans, courage to come out.”

And Ali continues to inspire.

As model and actress Bo Derek said at Fight Night, “It’s all about the Champ.”