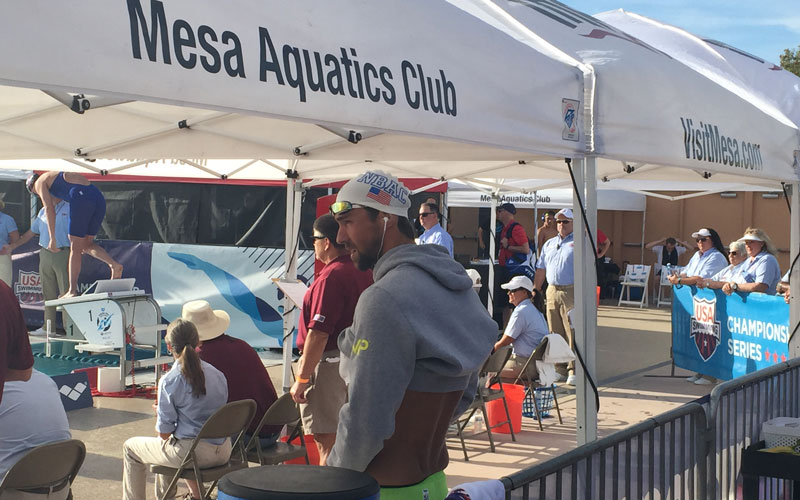 Michael Phelps narrows his focus as he prepares to race in the B Final of the 100-meter freestyle at the Arena Pro Swim meet in Mesa on April 14, 2016. (Photo by Nick Krueger/Cronkite News)

Bold maroon letters on the side read, “ASU.”

It has been a year since the Baltimore native picked up and moved west, following his coach Bob Bowman, who has witnessed each of Phelps’ 22 olympic-medal performances.

Both believe the move has made an impact on Phelps in and out of the pool. In the racing lane, he’s building his body back to Olympic-competition level. On the pool deck, he’s thinking about life beyond the 2016 Rio Games while preparing for the birth of his first child.

Two years ago at the Arena Pro Swim event in Mesa, Phelps swam in his first event since ending a 20-month retirement.

The 2016 event has a very different feel. Phelps is another Olympian preparing for the Games and no longer labeled a ‘‘comeback.”

“It was kind of crazy. Today was the first time a warmup felt like a warmup,” Phelps said. “I had an idea of my stroke, and what I was doing here. It’s been a long time since I felt that way.”

Phelps was focusing on how he starts the first 15 meters of his 200-meter freestyle race, but those around him have noticed more sweeping changes in the man Phelps is beyond the pool.

The Phelps who was charged with a driving under the influence in 2014 and served a six-month suspension handed down by USA Swimming is now sweating out his past transgressions under the blazing Arizona sun.

“He’s in such a better place as a person, and therefore as an athlete,” Bowman said. “I honestly never thought I would see that again. It’s been a real surprise, but a very pleasant one.”

Their relationship improved with the journey across the country. According to Phelps, there were times at the North Baltimore Aquatic Club when he nearly quit on Bowman, ready to find another coach.

“It’s just much more relaxing for us down here,” Phelps said. “I think our environment around the pool is more laid-back. We’re all pretty fired up every day we come into the pool.”

One person who has helped Phelps change is his training partner Allison Schmitt, a fellow Olympian who took home three gold medals in London in 2012, including an individual gold in the 200-meter freestyle.

“I can never thank her enough for just being herself and being able to help me get through some things that I’ve needed help to get through,” Phelps said. “It has been awesome to watch her grow. I think she and I have been able to work really well together over the past three or four years.”

“I feel like we’ve both been kind of hesitant in not really going for it,” Phelps said. “I just said to her, ‘go up and race. If you get destroyed, you get destroyed. How would you ever know if you don’t challenge yourself?’ I think she did that.”

The feelings work both ways. Schmitt has battled depression and had a cousin commit suicide not long after the London Games. Phelps, whom Schmitt views as an older brother, has helped her through both.

Schmitt now lives with Phelps and and his fiancee Nicole Johnson as she trains for the Olympics.

“We can joke around and at the same time have a serious conversation,” Schmitt said. “It’s awesome to have him there, to have that support. We’ve been through alot in the past year. Both of us have had different struggles. So to have that support system? He knows me better than I know myself, so that’s kind of funny.”

She eventually hopes to pursue a graduate degree in psychology at ASU, wanting to understand her own mind but also help others who experience depression.

“Hopefully I can change the negative stigma around that,” Schmitt said. “That’s something in the long run that I definitely want to change.”

Phelps shares similar aspirations to help those around him. It’s one of the ways he’s planning for life out of the spotlight after the 2016 Rio Games. Next year he’ll become a volunteer assistant coach under Bowman at ASU.

“I kind of thought ‘Why not?’ ” Phelps said. “I think it will really be the first time where Bob and I are on the pool deck together coaching, which will be interesting. We’ll have a pretty different interaction with the student-athletes that are there.”

Phelps said he hopes to help Bowman build a national-championship caliber team. And Schmitt and Bowman believe Phelps has what it takes to be an effective coach.

“Michael is very good at observing people and figuring out what they need to do to get better. I’ve seen him do that quite a bit,” Bowman said. “He’s very good at translating that into younger people. I think he’s going to be a natural as a coach.”

That covers the technical side of coaching. Schmitt sees another facet to Phelps – a knack for motivating.

One swimmer who will be working under the watchful eye of Phelps is Thomaz Martins, who will be a senior at ASU next season. Martins came to Tempe from Rio de Janeiro two years ago to swim and credits Phelps as part of the reason he got into the sport.

“It’s really exciting having Michael around,” he said. “I think he was my biggest idol growing up. I’ve watched his races since I was 7 or 8. It’s just amazing to practice with him. I’ve had two or three practices with him, and it’s just really cool to watch him race.”

Soon, Phelps will have an even younger face looking up at him. His fiancée Nicole Johnson is eight months pregnant with their first child. He sees the bump growing more and more every day, right along with the couple’s relationship.

“I think one of the coolest things is watching how close we’ve gotten,” Phelps said of his relationship with Johnson. “We’ve been able to work really well together and we understand each other now more than we ever did before. This is a new experience for the both of us. It’s becoming more and more realistic every day.”

Now Phelps will head to Colorado to train at altitude for six weeks before the U.S. Olympic Trials in Omaha, Nebraska, at the end of June. Assuming he qualifies, Phelps will look to add to his gold-medal stash in August.

He already thinks he’s in his best shape since 2008, but thanks to Arizona, his body isn’t the only part of him that has changed.

According to Phelps, after his final event in Rio de Janeiro, he will get out of the pool at the Olympics for the final time as a competitor . Behind him, he’ll leave an unmatched swimming legacy — he goes there with 39 world records and the biggest gold-medal count in Olympic history — not to mention a wealth of memories for his fans around the world.

He seems more at peace with retirement this time around, already dreaming of life as a volunteer assistant with a newborn at home.

He once lived a fast life, like an action adventure movie that rarely stopped. Now, like the end to an old Western, he’ll ride off slowly into the Arizona sunset.

“Swimming is going to be a part of my life forever,” he said. “I decided that Nicole and I are going to be here, so it will be easy for me to pop down to the pool in the morning or afternoon and just help out from time to time.”