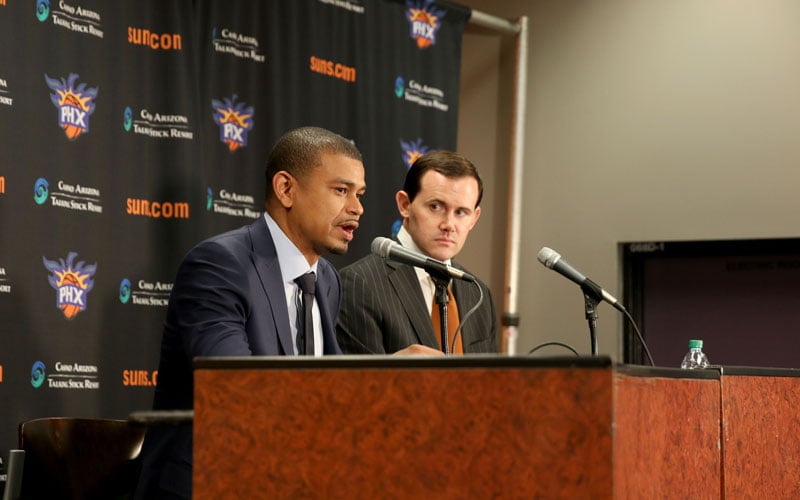 The Suns announced Earl Watson would remain with the team as the new permanent head coach. General Manager Ryan McDonough was impressed with how quickly he was able to get the locker room to buy into him. (Photo by Bill Slane/Cronkite News) 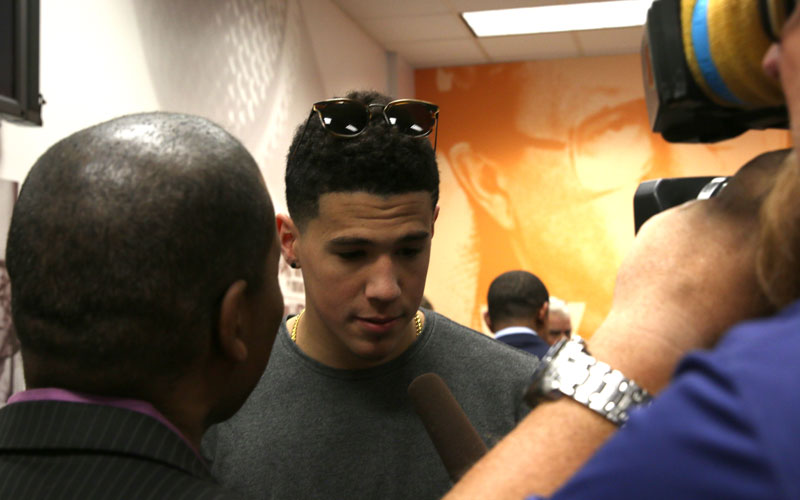 Suns guard Devin Booker was one of several Suns players on hand to congratulate Earl Watson on his hiring as Suns head coach.
(Photo by Bill Slane/Cronkite News)

Now they can just call him head coach Earl Watson after removing his interim tag Tuesday. In the three months he led the Suns after Jeff Hornacek was fired, Watson earned the trust and respect of his players.

Rookie guard Devin Booker was one of the several players on hand to congratulate Watson on his new position.

“When he speaks as a coach, everybody listens,” he said. “He’s gained that respect from everybody in the locker room.”

The desire of players like Booker, Brandon Knight and Mirza Teletovic to be on hand for the official announcement of Watson’s hiring drove home the fact that Watson had won over the locker room in his short time as head coach.

“Once we called them early this afternoon, they dropped everything, left their families and rushed over here to be with us,” General Manager Ryan McDonough said. “I think that tells you how they feel about Earl as their permanent head coach.”

The Suns made the decision to hire Watson without having formal interviews with any other candidates.

“Over the past 2 1/2 months we’ve gathered information about candidates from every aspect of basketball, every level of basketball,” McDonough said. “We had a number of productive and robust internal debates about the candidates.”

However, during Watson’s time leading the Suns, McDonough and the rest of the team’s leadership decided they should be looking internally as much as externally for their next head coach.

Now that the interim title has been removed, Watson will have a full offseason to work with his team and craft it to play his style of basketball. That will start with an increased focus on film and opponent analysis.

“One of the first things I want to do and execute immediately is start breaking down each team,” he said. “We’re going to sit in a room for an hour, Monday through Friday, and just break down teams and build a database and understanding of our opponents.”

With a young coach in place, the Suns hope to develop the young talent on the roster while finding immediate success on the court.

“We’re going to toe that line the best we can,” McDonough said. “I think coming into the season we hope to be a playoff team as well as get our young guys experience.”

McDonough acknowledges that is far easier said than done.

“But over the last two-and-a-half months of the season, when coach Watson was leading the team, I think he did a really good with that,” he said.

Watson has embraced the community of Phoenix as much as the Suns have embraced him. The Suns are in the process of raising $100,000 to build a park in the city and after his hiring Watson made a contribution.

“I’m making a pledge of $25,000 immediately,” he said. “To inspire and motivate and also be part of the community you have to show leadership and I think it’s good for the players to see.”

While Watson may have already got his players to buy into him, it is also important for him to get the city to buy in as well.

“The biggest gift is giving back and giving to the community as well,” he said.