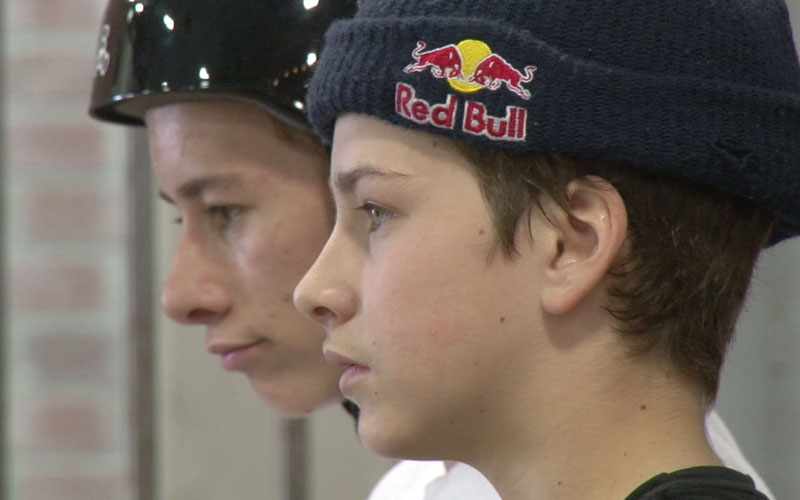 Jagger Eaton was 11 when he competed in the X Games for the first time. (Photo by Meehee Kim/Cronkite News)

At just 11 years old, Eaton made history as the youngest participant in the X Games, an extreme sport competition hosted by ESPN. His career has taken off quickly since.

At age 13 he won the Tampa Am, one of the most prestigious amateur extreme sport skateboarding competitions in the world. He is currently working with Nickelodeon on his own show, “Jagger Eaton’s Mega Life,” which will premiere later this year. He has previously appeared on the MTV show “Ridiculousness” with Rob Dyrdek, a professional skateboarder, actor, producer and reality TV star.

While he is now just 15, Eaton’s skateboarding roots run deep. He first stepped on a skateboard at age 4.

“I started skateboarding because my dad got me a skateboard for Christmas and I just couldn’t stay off it for the rest of the year,” Jagger said.

His father, Geoff Eaton, was a gymnast but always was interested in wakeboarding, snowboarding and skateboarding. When Jagger was 4, Geoff introduced him and his 6-year-old brother, Jett, to skateboarding because he thought it was a great exercise for children.

“I wanted to introduce something outside of gymnastics to them that I thought was a fantastic activity for kids, which was skateboarding,” Geoff Eaton said.

The family business gave Jagger and Jett the perfect place to practice. Geoff’s father, Mark, had owned Desert Devils, a gym in Mesa, since the 1970s. After Mark’s death in 1995, Geoff took over management of the gym. He expanded Desert Devils and added Kids That Rip, a skateboard park.

In 2015, the Eatons opened a new Kids That Rip facility in Chandler that includes a skate park along with gymnastics and parkour, an obstacle-course, fitness-training program.

With these skate parks, the Eaton family has given the boys their own personal playground, a facility to continue to practice everyday and perfect their skills.

“My philosophy as a parent,” Geoff said, “is I don’t like to hold them back from something they are passionate about.”

Jagger’s passion was evident and has helped make him a skateboarder known worldwide.

“My favorite thing about skateboarding, is, it’s just freedom. I can go on my skateboard and not have any worries about anything,” Jagger said.

Geoff said the turning point came in 2010 when he let Jagger, then 9, along with brother Jett, attempt the MegaRamp, a 200-foot ramp known in the X Games as “Big Air.”

“As long as they have a solid background in their riding, I feel comfortable letting them out there and taking a shot at it,” Geoff said.

Many people did not approve of what some perceived as a dangerous act on the MegaRamp.

“We got a lot of criticism for jumping some of the ramps that we did when they were that age,” Geoff said. “But we did our due diligence and they skated a lot and practiced a lot and we really took the smart progressions that were necessary in order to make it as safe as possible.

“For a 9-year-old kid he had a lot of control, a lot of board control at that age and was progressing very quickly,” Geoff said. “At about 9 you could see signs that there would be some special talent here.”

At that point, the world started to notice Jagger, through videos on YouTube and Woodward West, a summer camp in Tehachapi, California, as well as through his appearances with professional boarders, including two-time Olympic gold medalist Shaun White. It was at Woodward West that Jagger rode the Mega Ramp for the first time.

With his quick rise to success, Jagger has had to make adjustments most people do not have to worry about at such a young age, including frequent travel and a demanding practice schedule.

“Taking on responsibilities that normal kids don’t take on is hard,” Jagger said.

But Jagger said he manages to stay focused and excited, thanks to those closest to him.

“I have my family. My friends are family to me, and that’s all that matters right now,” Jagger said. “My personal life can wait. I want to experience things before that.”

Geoff said all of Jagger’s achievements have not gone to his head.

“I think my favorite part about Jagger right now is he’s had a lot of success for a young guy and he’s stayed really humble,” Geoff said.