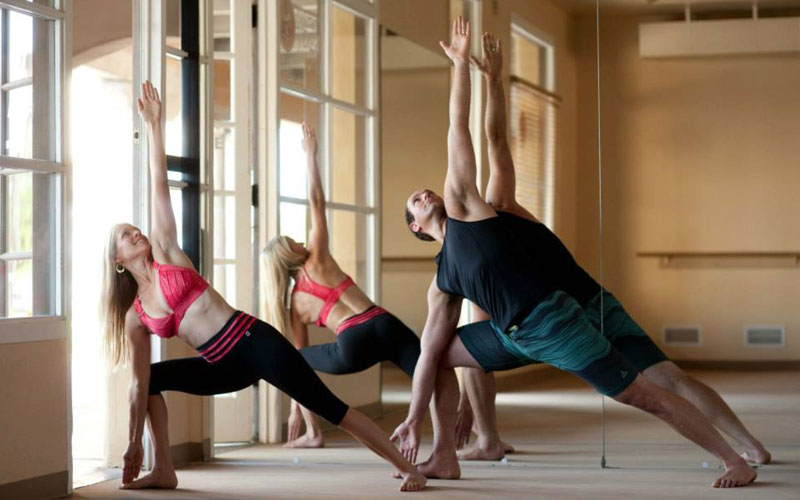 “I’ve been very aggressive in my life. I think that’s what helped me excel in sports,” said Wolff, who was drafted by the then-California Angels in 1992. “[Yoga] really just showed me the way of being more relaxed and open and free.”

Wolff is one of several former and current athletes who attend classes at Bikram Yoga Tempe. Owner Ben Zorensky said former Arizona State quarterback Brock Osweiler and his ASU offensive line used to be regulars. He also said Donovan McNabb, Shaun Rogers, Langston Moore and several other former and current pro and college athletes have attended classes at the studio.

The increase in athletes practicing yoga is due in part to the evolving fitness priorities in today’s professional sports world, according to Chad Ackerley, a former Arizona State offensive lineman who is now a Tempe Bikram client.

“Years ago everything was about the bigger muscles, the hamstring and biceps,” Ackerley said. “Now it’s all about the core strength and how you can manage your body and manage the health of your body over a long season.”

Zorensky is a former athlete himself, having played basketball at Johns Hopkins University. Since he opened the studio with his wife Elaina in 2002, the business has grown right along with the industry. According to a Sports and Fitness Industry Association study, more than 25 million people practiced yoga in the U.S. in 2014, a 33 percent increase from five years earlier.

“There’s two or three things it really helps to improve for athletes. The first is breathing, accessing the entire lung capacity. The more oxygen you have in the blood, the better your endurance, the better your recovery time, the more clear you are thinking,” Zorensky said. “In addition to breath, the elasticity you help train and the muscle tendon complex… That’s going to create a combination of strength and flexibility you’re not going to be able to achieve by just lifting a dumbbell.”

Ackerley is doing his part to try to educate young athletes on the benefits of yoga outside of the studio, incorporating it into his kids’ sports practices, where he serves as coach.

“I do a lot of the breathing stuff with the athletes, particularly in basketball and some of the sports where there’s a lot of running,” Ackerley said, “stuff that I learned in yoga. Now actually in baseball, part of our routine at the end of practice is a little bit of a yoga routine as we cool down at the end of the night.”

Zorensky stressed that the mental benefits of yoga are just as valuable as the physical ones.

“Breath is one of the most important components of yoga and factors into any sport,” Zorensky said. “We all need to be in that relaxed state. If there’s some sort of quick reaction or quick fielding that needs to take place, having that breath down is going to help you respond in a more calm and measured way.”

Wolff said yoga has helped him shed the aggression that he said enabled him to be a high-level competitor as a baseball player.

“I felt more calm not just here in class but outside of here,” Wolff said. “You can’t go home and (be aggressive), you can’t be in school and do that, you can’t go to the grocery store and say, ‘Let me be more aggressive.'”

Whether it be a 162-game baseball season, 16 tough games on the gridiron, or an 82-game basketball or hockey season, Ackerley says professional athletes are finding that yoga helps keep them healthy and sharp.

“Yoga certainly is one of those low-impact things that really works to strengthen the core, improves your flexibility, but also improves the strength of your bigger muscles,” Ackerley said. “That can help guys stay healthy over the long haul.”

Wolff only wishes he had known of the good it can do for his body sooner.

“I messed up. I should have done it a long time ago. It’s a shame I didn’t because I love it. I love it in here and it would have benefited me greatly,” Wolff said.