Founded in 1867, the historic copper mining town of Jerome was once known as the wickedest town in the west, according to the town. (Photo courtesy of Ryan Harvey via flickr) 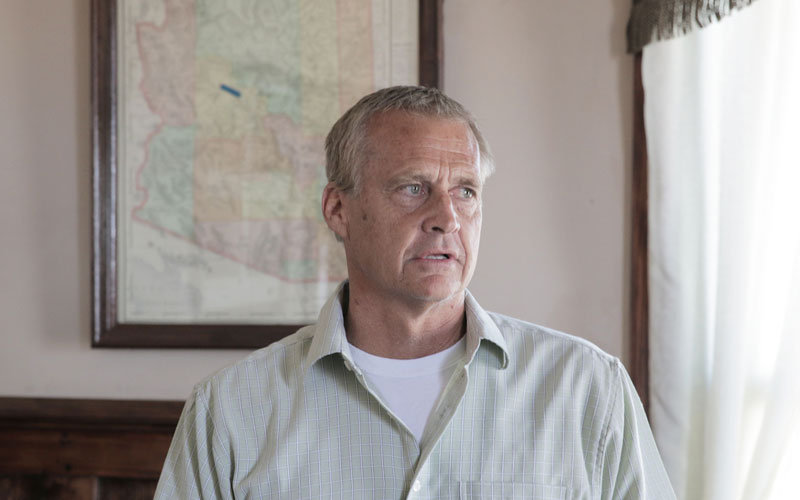 Glen Odegard bought a historic house in Jerome in 2012 after it sat vacant for 59 years. (Photo by Zac Pacleb/Cronkite News) 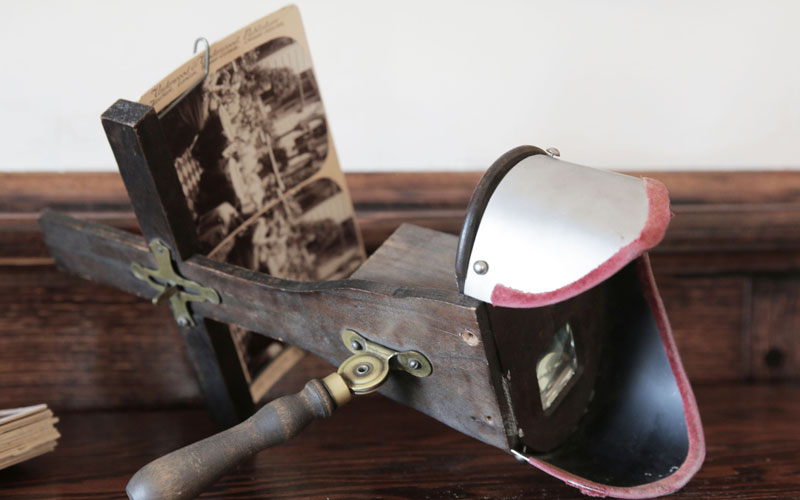 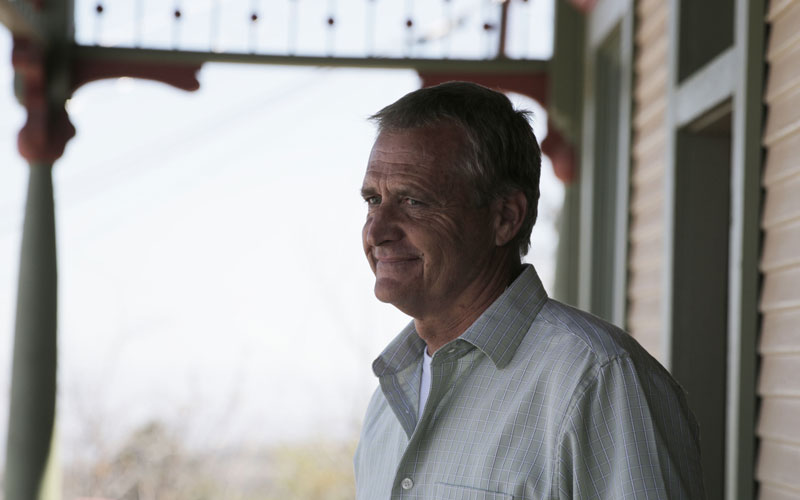 Glen Odegard boughta historic house in Jerome in 2012 after it sat vacant for 59 years. (Photo by Zac Pacleb/Cronkite News) 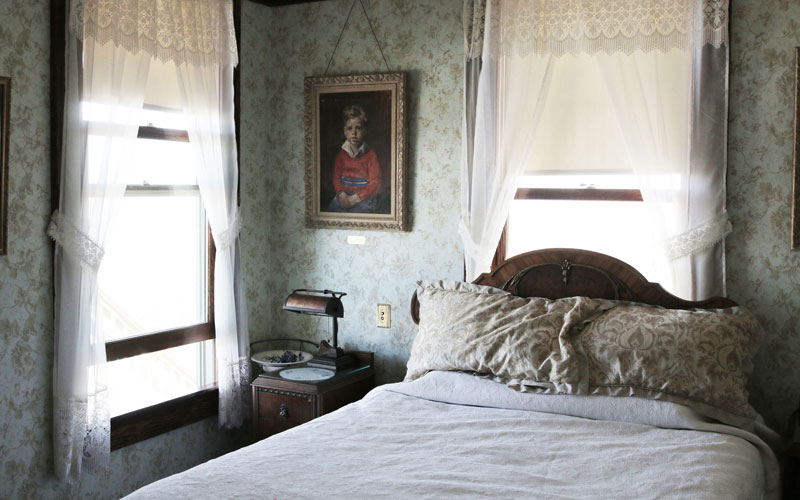 Glen Odegard renovated every room in the house and hung pictures of the family that lived in the home nearly six decades ago. (Photo by Zac Pacleb/Cronkite News)

Now, the town of Jerome says that is illegal, Odegard said.

Yet most cities throughout Arizona allow the practice, and many officials seem to encourage it.

In fact, Sen. Debbie Lesko, R-Glendale, introduced a bill at the state Legislature that would allow short-term rental services – like Airbnb and VBRO – to collect taxes on behalf of the property owners renting out rooms and homes. Doing so would make it easier for these businesses to operate in Arizona and elevate the “sharing economy” – a concept Gov. Doug Ducey promotes.

But as the bill weaved through the legislative process, lawmakers added language that also would prohibit local governments from banning the short-term rentals.

Supporters said homeowners have a right to offer these rentals, and it’s good for the economy.

Yet critics said the state has no business involving itself in local issues, and the move has angered communities that want to push back against the rental practice.

After Odegard purchased the run-down house in early 2012, he rebuilt the two-bedroom house, which was built in 1898. He began renting it out in 2013.

Odegard describes the home as a “museum,” outfitted with antique decorations and photos of the house before he owned it. Each room has been restored and vintage magazines and newspapers, typewriters and old cookbooks fill the rooms.

The outdoor patio provides a view of Jerome and the entire Verde Valley.

“You don’t get the opportunity to live in a museum … rather than just seeing one from afar, so they enjoy the reality of being here,” he said.

Odegard said he enjoys the slower, laid-back atmosphere of Jerome, and he values the ability to share that experience with visitors.

But in early 2015, Jerome officials told him he could not operate as a short-term rental business, Odegard said.

“My case is unique here,” Odegard said. “I went through all the building permit processes and everything with the town of Jerome, and they issued me a building permit and a business license for three years. Then after three years, they came back and said, ‘You (can no) longer allowed to rent it as a vacation rental.’ So the fact that they didn’t tell me before hand was kinda unnerving to me.”

Odegard and four other property owners took action against the ban. Jared Blanchard, an attorney at the Goldwater Institute, represents the homeowners in a lawsuit against the town.

“People’s property rights need to be respected and this legislation as well as our lawsuit against the town of Jerome is about protecting property rights from governmental overreach and making sure everybody is playing by the rules of the game,” Blanchard said.

As the original bill made its way through the Legislature, the institute, a conservative think tank based in Phoenix, spearheaded the effort to include the language prohibiting the bans.

Timothy Sandefur, vice president for litigation at the Goldwater Institute, said the bill initially “did not go far enough.”

“One of the ways people are able to live full and happy lives is to use their property as they see fit, and the short-term rental phenomenon is kind of a new thing,” Sandefur said. “It’s part of this sharing economy thing that’s just come about in the last few years.”

If the bill becomes law, Odegard and any other property owners could rent their houses as they please.

“Whether or not the bill passes, we think that we have a great argument in that case,” Blanchard said. “We’re hoping that we’ll be able to protect our clients’ property rights.”

Ken Strobeck, executive director of the Arizona League of Cities and Towns, opposes the bill.

“Any kind of statewide preemptions is the sort of thing we philosophically don’t believe in,” he said. “We think that those decisions are best made on a city by city basis depending on what’s in the best interest of the local residents.”

Only a few cities and towns ban the practice in Arizona.

In 1995, Sedona passed a short-term vacation rental ban, which was modified in 2008.

Sedona City Attorney Robert Pickels agreed with Strobeck. His main issue with SB 1350 is that the bill would “take away the ability to manage issues at the local level.”

“We think local decisions should be made by the localities that are there,” he said.

Pickels said he has received phone calls Sedona residents – both in support and opposition of the bill.

For those who oppose vacation rentals, “it’s a quality of life issue, and it has to do with traffic in our neighborhoods and not knowing people in the neighborhoods, odd activities at odd hours, (and) overpopulating residences that are designed to have a certain number of people,” he said.

Short-term rentals are listed on the Airbnb app, but Pickels said the city does have a department dedicated to looking into those listings and reviews them for possible prosecution.

“If we lose the ability to enforce it, we are going to have same problems as before,” he said.

Jerome, like Sedona, thrives on a change-of-pace vibe. The old, mile-high mining town was reinvented in the 1960s. With a population hovering near 400, the town features several studios and galleries.

Town Manager Candace Gallagher said she could not comment about vacation rentals in the town because of the ongoing lawsuit.

What would the bill do?

If the bill passes, Arizona would join Florida as the only states with this preemption, Blanchard said. Florida’s law keeps cities and towns from banning the rentals, but it allows local governments to regulate them as they please.

“We do recognize that Airbnb-type operations are happening all over the place,” Strobeck said. “That’s something that’s very likely going to be difficult to ban completely, which is why even though we’re opposed to the preemption on city bans that we would be willing to work with the proponents of the bill to incorporate safeguards.”

Originally, Lesko created the bill to clear up confusion for property owners renting their spaces.

Lesko wanted to create a “unified system” to allow home-sharing companies to interact with the Arizona Department of Revenue.

Lesko said the companies could collect taxes and distribute the funds to appropriate government entities. This would prevent confusion for the property owners about whether they need to collect taxes.

Lesko said she is optimistic the Legislature will pass the bill. The bill has made its way through the Senate, and the House is considering the measure.

Sean Laux, legislative liaison at the Arizona Department of Revenue, said they want to make sure taxes are collected as fairly and easily as possible, and this bill would help those efforts.

“From the department’s perspective, having a single entity is administratively easier than having all the individuals who are renting out their homes for a little extra money,” Laux said.

It also would mean Odegard could rent his home, which offers a view of Jerome.

“Most people up here just love Jerome, love history. … There’s very few things in Arizona that are that historic anymore,” Odegard said. “The fact the (house) itself is historic, Jerome is historic, people really enjoy that throwback life.”