Loan officer Pedro Morales has been contacted by several alleged victims of a housing scam in Phoenix. (Photo by Kaitlyn Ahrbeck/Cronkite News) 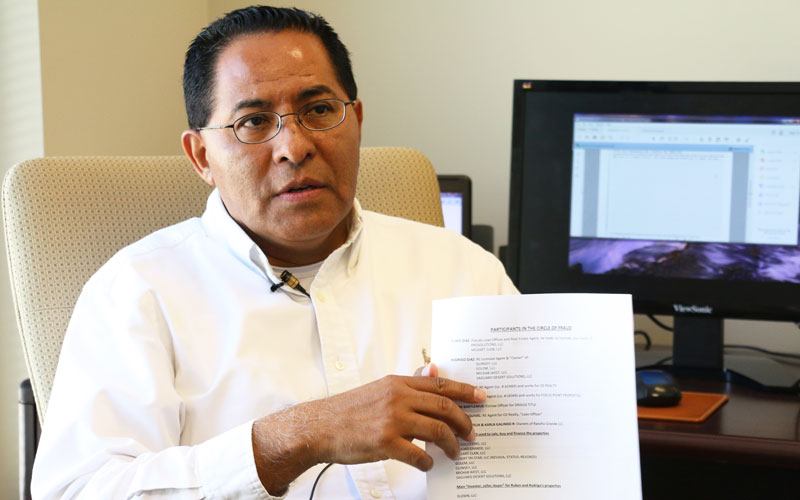 Loan officer Pedro Morales has been contacted by several alleged victims of a housing scam in Phoenix and is helping in their lawsuits aginst the scammers.(Photo by Kaitlyn Ahrbeck/Cronkite News)

Instead, according to the lawsuit, they were scammed.

Check to search loan officers in your area

“Their claim was that they were offered something verbally and on paper it was totally different, due to the language barrier,” said Pedro Morales, a loan officer who started hearing complaints from families last year.

“Someone contacted me asking for help in regards to somebody who had been taken advantage of with $34,000,” Morales said. “They mentioned the name Ruben Diaz, and when I heard Ruben Diaz, I just laughed.”

Morales took Diaz to court in 2014 to help another family who filed a complaint against Pedro Diaz, the owner of ProSolutions.

Other families allegedly paid ProSolutions tens of thousands of dollars they believed were down payments on homes but never owned the title to the property. Diaz did not return several phone calls seeking a response to the allegations.

“Arizonans trusted this business to help them turn their dream of homeownership into a reality,” said Attorney General Mark Brnovich in a news release about the case. “Dozens of families lost their hard-earning savings and we want to help them get their money back.”

Luz Cortes, 54, says her family is among those allegedly scammed by Diaz and his son Rodrigo who also runs the company.

Cortes contacted Diaz to help refinance her home. She says instead Diaz offered to find her family a new home for $40,000.

He asked for $12,000 to start the search and then an additional $3,000 for any extra costs that might come up, according to Cortes. She says she agreed to Diaz’s terms, signing a contract written in English after he translated it verbally for her in Spanish.

“After some time, we received a foreclosure notice and we didn’t know why,” Cortes said in an interview. “We contacted him and he didn’t give us concrete response as to why but he told us to be patient.”

Diaz gave Cortes more documents to sign and asked for $25,000 and she could stay in the home she said. When her family refused to pay him more, they were forced to move out.

Cortes also asked Morales for help in the group lawsuit filed against Diaz.

“We have to work together to not only get rid of Ruben but also other con artists who are doing the same,” Cortes said. “There are so many other ways to get money and in honorable ways, not stealing money from people who don’t have it.”

Sandra Hurtado said in an interview she lost money she thought she was paying ProSolutions for help buying a home.

Hurtado said she paid $3,000 and signed a contract. But became suspicious and asked one of her daughters to translate the contract. She said she then discovered the terms were different than what Diaz had told her in Spanish. Hurtado said she asked for a refund for the $3,000 she paid Diaz but is still waiting for a response.