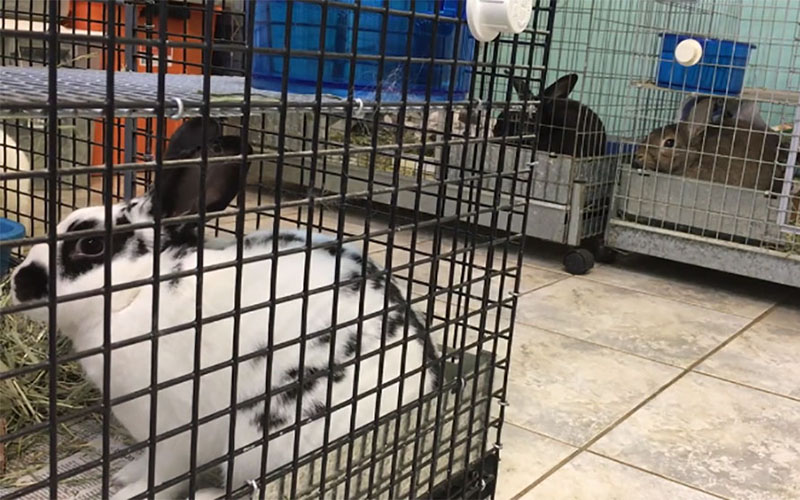 Cookie, a rabbit at the Fairfax (Va.) Humane Society, which is also holding Laurel and Hardy, in cages at rear, at its shelter. (Photo by Lauren Clark/Cronkite News)

Emily von Klemperer of the PETA Foundation said animals given as pets for Easter often end up “abandoned or dead before their first birthday,” (Photo by Lauren Clark/Cronkite News) 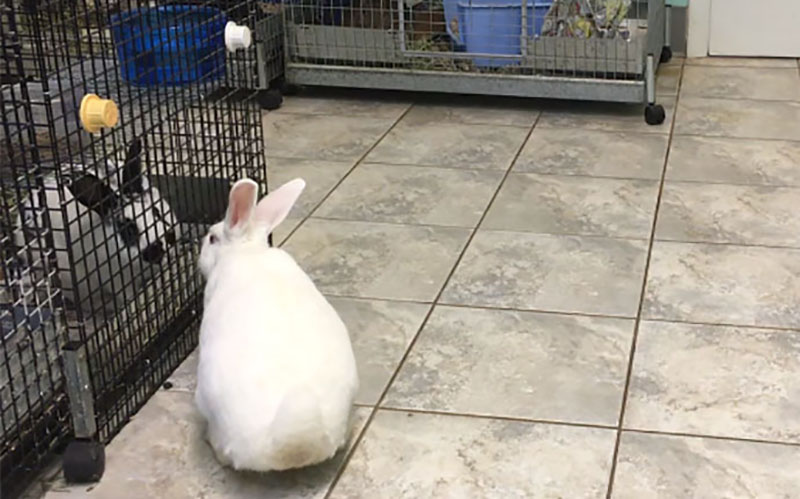 Peter, outside the cage, visits Cookie at the Fairfax (Va.) Humane Society, which already has too many bunnies and expects more after Easter. (Photo by Lauren Clark/Cronkite News)

WASHINGTON – This is typically not a good time of year for Phoenix rabbit rescuer Kim Dezelon, who expects to spend the coming weeks helping local animal shelters find homes for bunnies given as Easter gifts and quickly abandoned.

The World Animal Foundation estimates that 80 percent of the bunnies that end up in shelters were given as Easter gifts, a trend experts say they also see for chicks, ducklings and other Easter animals.

Dezelon said people often make an “impulse buy” of an animal that they soon find out is a lot of trouble to care for – but not usually able to care for itself in the wild and not always welcome at overcrowded shelters at this time of year.

If you or a bunny you know are in trouble, contact the Arizona Humane Society’s Pet Resource Center, which is open seven days a week, at (602) 997-7585, ext. 3800, for advice on caring for the animal or options for placing it.

“We’ve noticed this for years,” said Dezelon, who works for Brambley Hedge Rabbit Rescue. “People walk into pet stores and buy a bunny without doing any research and get no information from the store. Then, a few months later, they realize how much care the animal needs and they don’t want it anymore.”

People for the Ethical Treatment of Animals urges those looking for a pet to resist the urge to buy a bunny during the holiday, because “most rabbits who are given as presents during Easter end up abandoned or dead before their first birthday,” according to one official.

“Rabbits make a terrible companion for children,” said Emily von Klemperer, the director of legal and corporate affairs for the PETA Foundation. “They’re very sensitive creatures. They don’t want to be picked up and handled.”

Disillusioned buyers who release their gift rabbits into the wild are all but setting them up for death, said Dr. Susan Gale, the acting state veterinarian at the Arizona Department of Agriculture.

“Domestic bunnies are not prepared to live in the wild,” Gale said. “Releasing them into the wild leads to suffering and premature death.”

She echoed the others who discouraged spontaneous pet purchases of any type – particularly bunnies.

“Bunnies eventually turn into rabbits, and they don’t become the cuddly pets you would expect,” Gale said. “The cuteness doesn’t always last, and you have to fully consider taking on that responsibility.”

Potential owners should be ready for a long commitment. Bunnies can live for 10 years or more when properly cared for, Gale said, and while they can be litter-trained, they should be spayed or neutered immediately to prevent urine spraying and aggressive behavior.

Gale also says that homes with rabbits should be pet-proofed by covering wires and expensive furniture, promising that bunnies “will chew a lot of your stuff.”

Another important factor to consider is space. Dezelon said bunnies should never be kept in temperatures over 80 degrees and should never be left in a cage for long periods of time.

“Rabbits, especially young ones, can get very mischievous,” Dezelon said. “Just like any pet, they need lots of exercise and room to move around.”

One of the biggest rabbit-related challenges is veterinary care, Gale said.

“Many vets aren’t as familiar with critters and birds as they are with cats and dogs,” Gale said. “Families can have a hard time finding someone to spay, neuter and offer specialized care.”

Research is the most important thing to do before buying a bunny, experts said. Dezelon, who owns five bunnies of her own, said the animals can actually make excellent pets – for those who are prepared for the commitment.

“They really can be great pets,” Dezelon said. “Everything just has to be on their terms.”

Dezelon said you can still give a bunny for Easter – just not a real one.

“Give them a chocolate bunny or a stuffed animal, and everyone is going to be a whole lot happier,” she said.