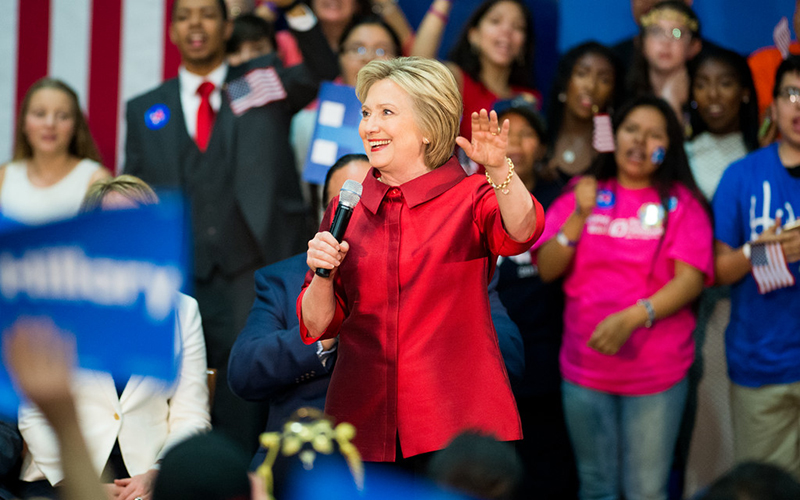 Hillary Clinton speaks during a campaign rally on Monday, March 21, 2016, at Carl Hayden High School in Phoenix. Clinton spoke on a wide range of topics and displayed a broad range of support from prominent Arizona Democrats, including Giffords and Kelly.
(Photo by Ben Moffat/Cronkite News)

By 8 p.m. the group had grown to about 100 people, from young adults to seniors who sported “Feel the Bern” shirts and pins as they chatted, ate and sipped cocktails and sodas.

Then the results started flowing in. By 8:12 p.m., Clinton was leading by 20,000 votes on television screens and frowns marked the faces of Sanders’ fans, including the man wearing a “Hunk of Bernin Love” shirt.

“I don’t care if he wins or not, I support Bernie Sanders’ ideas,” said Eder Rosas Pimentel, of Phoenix. Supporters spoke of challenging the vote.

But the results of the Democratic presidential preference race made it a party over at Bliss ReBar a few blocks away. About 50 Clinton revelers spent the evening chatting as loud music pulsated over the conversation in the dimly lit restaurant and bar.

As a breeze wafted through the open doors, about 100 people gathered outside and stood inside gazing at television screens, waiting for results.

Clinton’s communications director, Tim Hogan, spoke of her “tenacity” and predicted the Arizona race for delegates would be tight.

Or maybe not. When news reports announced Clinton as the predicted winner, the applause and cheers were louder than the music, the sound extending beyond the walls of the restaurant.

Karen Cohen, an Ahwatukee resident who said she went to high school with Clinton, said the presidential candidate was as dynamic then as she is today.

“I’ve been an avid Hillary supporter for more years than I care to admit,” Cohen said.

A Republican Party gathering miles away at a Phoenix area resort was more subdued. It starting with a prayer about choosing a president based on Christian religious beliefs such as anti-choice on abortion and anti-gay marriage.

U.S. Senate candidate Kelli Ward, who is facing veteran Republican Sen. John McCain, mingled with about 40 people at the Four Points By Sheraton-Phoenix/South Mountain. When Trump was announced as the winner, people barely looked up at the screen.

Not so at Chambers on First, which was turned into an impromptu and unofficial gathering of about 50 Trump supporters, including Maricopa County Sheriff Joe Arpaio. They cheered, laughed and shared fistbumps at the news that Trump was the projected winner of the Republican presidential preference election.

They snapped pictures of fellow supporters in front of the television screen showing Trump declared as the victor.

And Arpaio, who endorsed Trump, accepted congratulations and handshakes.

“This is great for Arizona, especially when you’re talking about illegal immigration,” Arpaio said. “I think it’s a victory.”