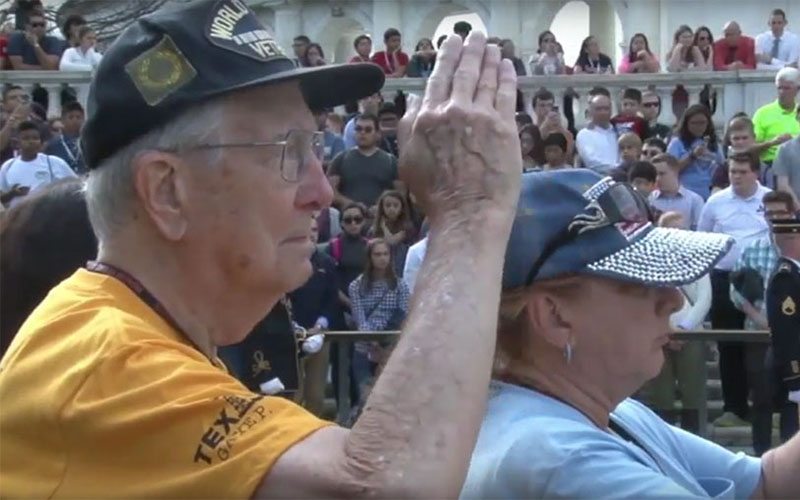 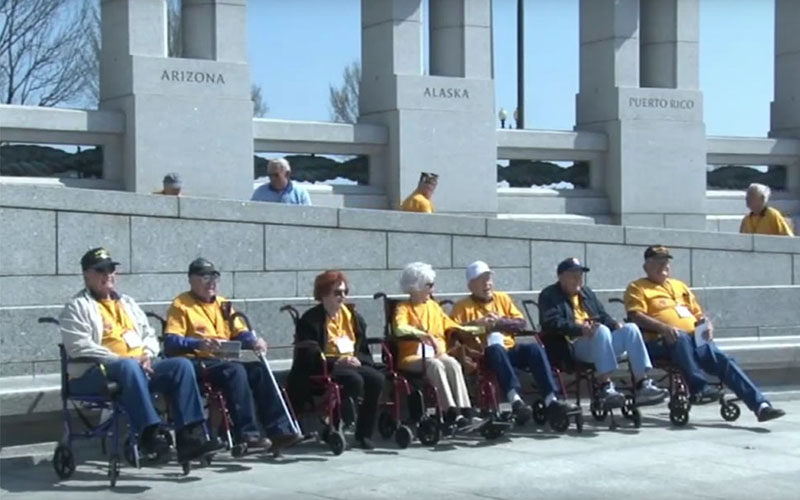 Some of the 26 veterans who traveled to Washington with Honor Flight Arizona this wee, pose under the Arizona column at the World War II Memorial on the National Mall. (Photo by Samantha Witherwax/Cronkite News) 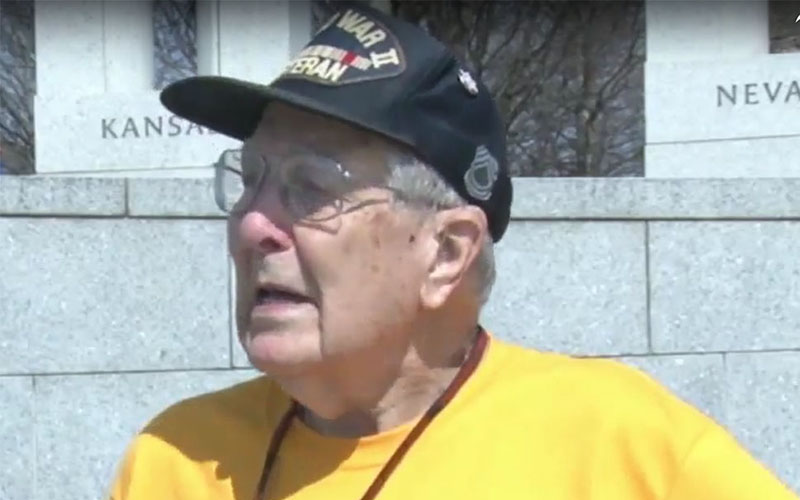 Jim Mende said other tourists thanked the vets for their service. While they appreciated the thanks “we did at the time what had to be done … and happy to have done it.” (Photo by Samantha Witherwax/Cronkite News) 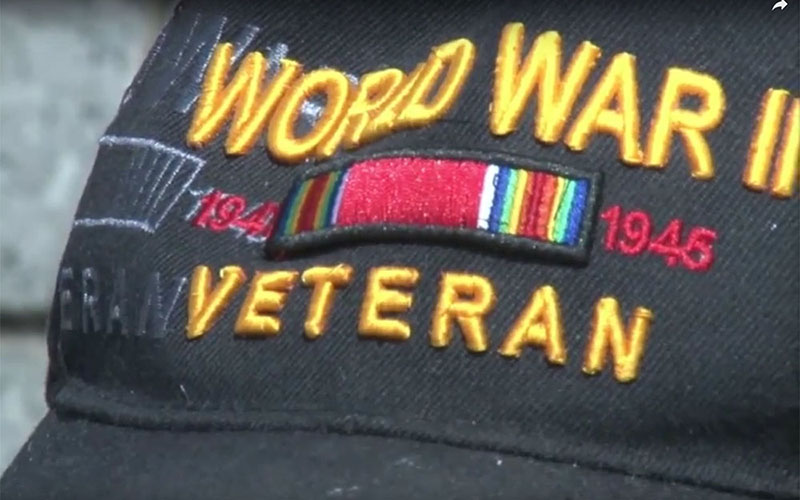 Honor Flight Arizona has brought more than 1,300 veterans to Washington to visit the World War II Memorial and other monuments since it began flights six years ago. (Photo by Samantha Witherwax/Cronkite News)

WASHINGTON – With a steady, practiced motion so natural it was hard to imagine he learned it 70 years ago, Jim Mende raised his right arm slowly before snapping it into a crisp salute against the bill of his ball cap.

The Sun City West resident was saluting the changing of the guard Thursday at the Tomb of the Unknown Soldier in Arlington National Cemetery. It was just one stop in an emotional two days of Washington visits for the Honor Flight Arizona group of veterans Mende was traveling with.

Honor Flight Arizona is part of the national Honor Flight Network, a private, nonprofit group that works to bring World War II and Korean War veterans to Washington to see the memorials that the nation has built in their honor.

Officials said the Arizona group has brought 1,360 veterans to Washington since its first flight in 2009. This week’s visit, the first in 2016, included stops at Arlington, the U.S. Naval Academy and the Korean War Veterans Memorial, among others.

“First time I’ve been to D.C., and it’s just so exciting,” said Dorothy Steadman, who was stationed at the Great Lakes with the Navy WAVES during the war. “I can’t believe all the beautiful things.”

One of the highlights was the group’s visit to the World War II Memorial, a massive colonnaded granite-and-bronze monument with pools and fountains, sitting halfway between the Washington Monument and the Lincoln Memorial on the National Mall.

“This memorial, there’s a lot of sayings engraved that are so true that they should be publicized to the young people today,” said Mende, who served as a warehouse foreman in a signal company in the South Pacific during the war.

The visit was a time for the 26 veterans in this group to reflect and to remember their service.

“It was fun but I was glad to get home, then I got home and nothing was the same so then I joined the Army,” said Calvin “C.J.” McMickens, a Tonto Basin resident who did a tour in the Navy before switching branches.

“Paratroopers, 82nd Airborne Division,” said McMickens, before adding with a laugh, “It was alright. I was young and we was jumping out of perfectly good airplanes.”

Steadman, a Sun Lakes resident, remembers her time in the service as “a wonderful experience, just wish I could do it over.”

The veterans, in bright yellow Honor Flight T-shirts, and many wearing baseball caps identifying their service, were also recognized by other tourists.

“When people would say, ‘Thank you,’ to my hat,” Mende said, “I’d stutter and say, ‘I can’t say that it was a pleasure but it was an experience, a good experience in many ways.'”

As he stood at the World War II Memorial, he wondered aloud if there should be more visits to the memorials to recover “what we’ve lost somewhere along the line.”

But some in the later generations still remembered.

“Look at the kids here at the memorial,” Mende said, choking up briefly. “They come up without being prompted by their parents and they say, ‘Thank you.’

“We don’t need the thank yous,” he said. “We appreciate them. But we did at the time what had to be done … and happy to have done it.”