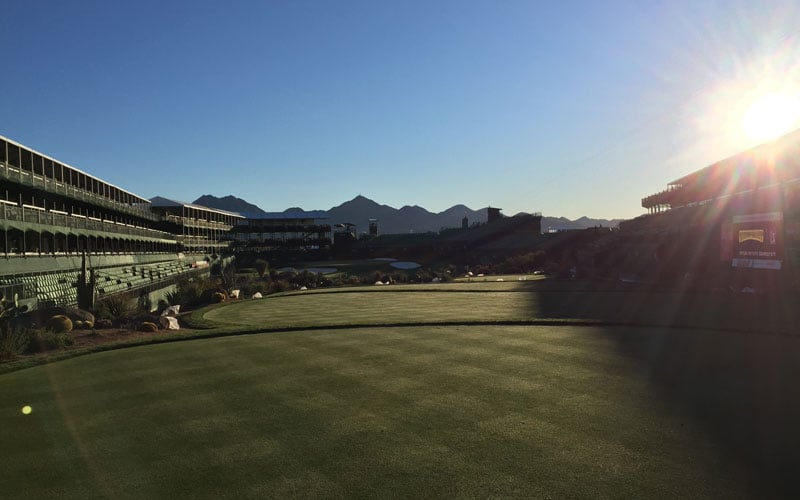 The sun rises on the first round of the 2015 Phoenix Open, a PGA Tour stop. The Tour remains active in trying to attract Latino players through PGA Latinoamerica. (Photo by Nick Krueger/Cronkite News)

“It’s elitist, judgmental, white collar and rich,” Magdelano, 51 said. “It’s a sub-culture that has it’s own fashion, rules and history. None of that is part of the minority experience.”

Magledano’s experience and views echo that of many Latinos, who are underrepresented in the sport. According to the U.S. Census Bureau, 16.0 percent of the U.S. population was Latino as of 2010. However, just 11.7 percent of golfers were Latino, according to a 2010 study of minorities by the National Golf Foundation.

“I think perception is the No. 1 cause of minorities not getting into it,” said Chris Montgomery, director of communications for the Arizona Golf Association. “It’s perception of cost. The perceived value of cost and image is prohibitive.”

This starts in Latin America, where most courses are private and off limits, according to Alzucena Maldonado, founder of the Latina Golfer’s Association. This isn’t the case at Turquoise Valley Golf Club in Naco, a stone’s throw away from the border between Mexico and the United States. It is open to the public.

Founded in 1908, it’s the oldest course in Arizona and is in a majority Latino community. According to course general manager Bob Barnes, 70 percent of workers at the course are Latino, including some who cross the border everyday.

Barnes has priced a round of golf according to the community where the course resides, at $27 to $37 based on weekday or weekend, but admits it’s still not affordable for Latinos who don’t have well-paying jobs.

“Anyone who has a good income base tends to play here,” Barnes said. “Most Latinos who can play golf work and most Latinos who do play golf here are people who have an income which can support that and therefore they tend to be the managers, the doctors, the lawyers, the workers at the mine.”

While Barnes’ course caters more toward the casual golfer, if a Latino golfer wants to become elite, they have to pay more money and play on higher level courses than what Barnes is offering.

Such is the case with Desert Edge High junior Aaron Ramos, who won the individual Arizona Division II state championship in 2015 after finishing tied for sixth as a sophomore.

He picked up the game from his father, David Ramos, when he was 6. As a single father, David had to stop playing so he could afford the equipment and tournament entrance fees for his son.

David said he has put more than $3,000 into his son’s equipment.

“Anywhere we go and we try and practice to give him better conditions to practice at it’s been tough because they’re so expensive,” he said.

One player who inspired Ramos to play was Puerto-Rican-born Chi Chi Rodriguez, who won eight times on the PGA Tour in the 1960s and 1970s. One opportunity provided to Latinos now that wasn’t in Rodriguez’s time is the PGA Tour Latinoamerica.

It’s an 18-tournament, 13-country tour with 200 members; 130 of are fully exempt. The top five finishers at the end of each season earn a spot on the Web.com Tour, a minor league of sorts where players can work toward earning a spot on the PGA Tour by placing well in tournaments over the course of a season. Two players from the PGA Tour Latinoamerica, Bronson Burgoon and Zac Blair, are currently on the American PGA Tour and ranked 272nd and 137th in the world respectively.

“We wanted to expand our brand into the region,” said Nelson Silverio, PGA Tour director of communications who has also worked with the tour on growing the game among minorities. “We created a pipeline for Latin players. In the past the guys who we’ve all heard of just made it on pure grit.”

The need for Latin American players as role models goes hand in hand with growing the game among Latinos. Players like Lee Trevino and Rodriguez are now gone. Fewer elite players are originating from Latin America than in the past which can lead to a lack of interest or inspiration to play the game.

“The guys who look Spanish don’t really play up that fact while Tiger Woods is black and they made a big deal about it because that separation is so massive,” Montgomery said. “(Miguel) Angel-Cabrera, they don’t talk about him being Spanish as much. Ultimately that’s how you want it but for that population you’ve got to champion the cause. Who is he? Where did he come from? How did he get started? What are his motivations?”

According to the National Minority Golf Association, the number of African-Americans playing golf stood at 700,000 in 1992. Tiger Woods then won three U.S. Amateur Championships and turned pro in 1996. By 1998, one year after Woods won his first major, over 4 million African-Americans played golf. Those numbers, however, have not translated to more African American golfers on the PGA Tour.

One success story from Latin America is Colombian Camilo Villegas, who has four PGA Tour wins since joining in 2006 and quickly rose to fame with a unique crouching putting stance.

“I think we’re definitely headed in the right direction,” Villegas said. “The game of golf is a lot bigger in a place like the United States than it is in South America but it’s growing and you’ve got to start somewhere.”

The biggest lingering questions seem to be where is that “somewhere” for the Latino community and whom should be targeted. The PGA Latinoamerica caters to professionals and can provide role models but it still isn’t teaching the game itself. Bringing in new, young Latino golfers is a struggle, yet 78 percent of Latinos in the United States have never picked up a golf club and only 1.8 percent of golfers who are Latino are between the ages of 6 and 17, according to the NGF.

Programs like the First Tee provide life skills and teach values within the framework of golf for children, but according to Silvario the main problem remains awareness of the game.

He once tried to give out tickets to a couple during a tournament in Playa Del Carmen, Mexico and they weren’t even aware they were allowed to go.

“The sport is still evolving down there,” he said. “My boss likes to say that the sport in Latin America is where it was in this country 30 or 40 years ago. What that means is it’s a very private club-driven sport. Access to public facilities is close to none. Golf federations are still nascent. They’re still getting there.”

One group raising awareness is the Latina Golfer’s Association, which uses golf as a business and networking tool while introducing Latinas to the game.

“What I’ve found is that they’re interested, they’ve just never been introduced,” said association founder Alzucena Maldonado. “There is a new face to golf in America and that’s that anybody can go play golf and I think the golf industry has to do a better job in getting that word out that golf is for everybody and that everybody is welcome. The bottom line is you have to do outreach.”

Silverio also said the PGA Tour is exploring footgolf, where a soccer ball is used instead of an actual golf ball and the players use their feet instead of a golf club. The idea is to tie the game of golf to a sport already popular among the Latino population in soccer.

“We have to think creatively,” Silverio said. “You get them on the property. You get them with a sport that’s somewhat familiar tied to one that’s not – in a fun environment and oh, by the way, their is a golf tournament next door you might want to check out.”

Barnes at Turquoise Valley has found his own way to grow the game. He hosts quinceaneras and weddings at his course. Once the Latino members from the community see the course, they’re often inclined to come back and play, he said.

“The Mexican community endorses a lot of family events like those things and frankly spend a lot of money on it and we cater to that,” he said.

The broader challenge remains finding a way to get older millennials involved, which is proving to be more of a challenge. The balance is delicate trying to market a sport which takes an entire morning to play to a generation which seemingly can’t focus on more than one thing. According to a 2015 study done by Microsoft, humans were able to focus on one task for 12 seconds in 2000. That number has dropped to just 8 seconds over the past 15 years.

“We need to figure out where this group is already consuming media and consuming sport and target that demographic where they are already,” Silverio said. “I don’t think we should be arrogant enough to say ‘We’re the PGA Tour, you should come check us out because we’re putting ads out in Spanish’ because that sounds very condescending.”

According to the 2010 NGF study, there are 5.8 million Latinos who are interested in golf but have never played. And it only takes one to find the next Ramos, Villegas, Trevino, Angel-Cabrera or Rodriguez.

“The word that keeps coming up is aspirational,” Silverio said. “When we did some research in heavy Hispanic, heavy Latino markets ‘aspirational’ to describe golf kept coming up. I don’t think that’s necessarily a bad thing.”