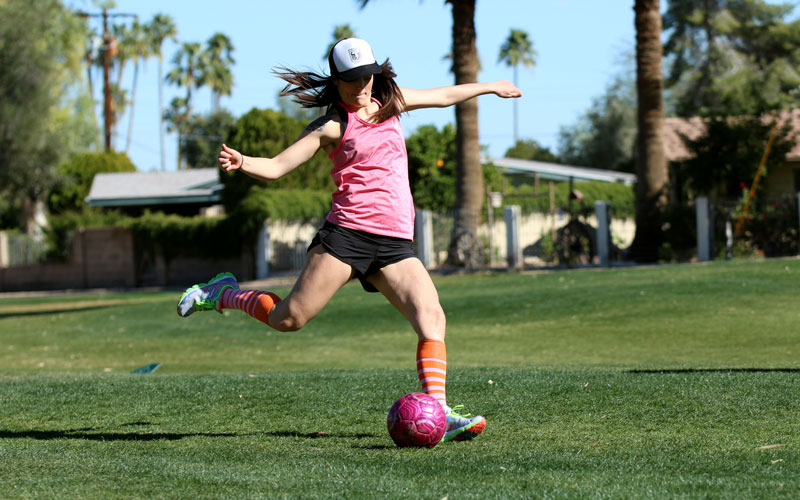 Kayce Kahl tees off during a round of footgolf at Shalimar Country Club in Tempe. (Photo by Rian Bosse/Cronkite News) 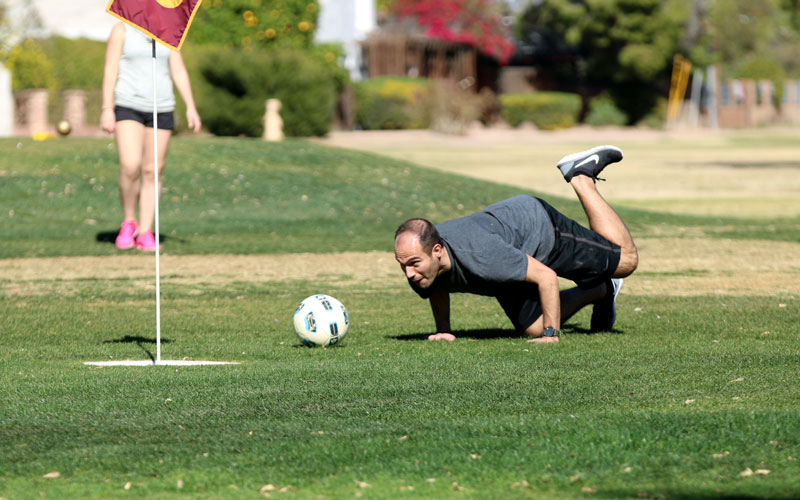 Kreg Hefner uses a header on the green while playing footgolf at Shalimar Country Club in Tempe. (Rian Bosse/Cronkite News) 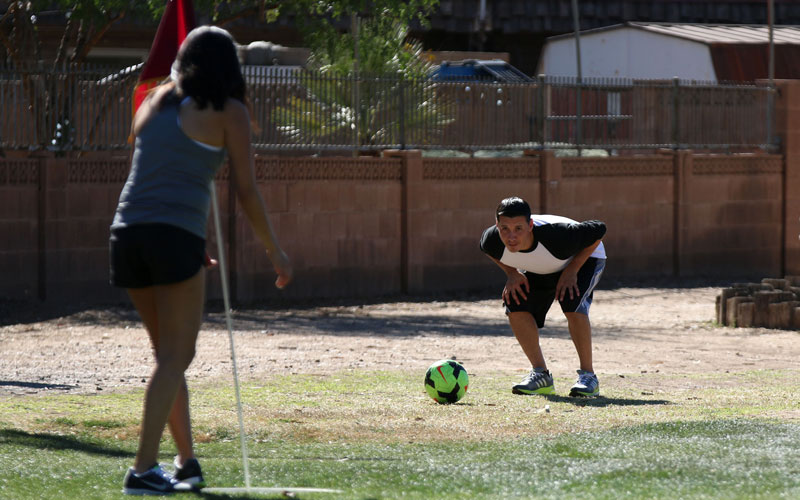 Daniel Chavarria lines up a putt on the final footgolf hole at Shalimar Country Club in Tempe. (Rian Bosse/Cronkite News)

Rather than hitting a golf ball, footgolfers kick a soccer ball toward a 22-inch hole, navigating fairways and rough, just like in regular golf. The scoring is the same, so birdies are still birdies and bogeys are, unfortunately, still bogeys.

To the surprise of many Shalimar employees, more than 100 people — many in bright knickers and knee-high socks in homage to the late golfer Payne Stewart — filled the course.

“It was way more popular in its first day than anybody even dreamed of,” said Mike Lentino, an “ambassador” at Shalimar, which is a similar role to that of a marshal at other courses. “I wouldn’t say we were unprepared for it, but I don’t think we were ready for quite that many to be here.”

Now heading into its third summer, footgolf is thriving at Shalimar and providing the club with a new stream of revenue — something courses of all sizes across the Valley and the nation are looking for as the game recovers from years of losing regular golfers while failing to attract new players.

For several years now, golf has struggled to regain its peak level of participation. For the fourth year in a row, 2014 saw participation stay around 25 million golfers, down from its peak of 30 million several years ago, according to the National Golf Foundation.

But as Shalimar found, something like footgolf is an inexpensive way to bring in paying customers and introduce people to traditional golf through a fresh alternative. While it might not be as successful for larger, higher-end courses, it’s a good fit for smaller venues that serve as an affordable alternative for many golfers, according to Paul Szymanski, the director of golf at Shalimar.

“The more golf courses we can keep open, the more we can keep the game alive,” Szymanski said. “We have no shortage of golf courses here in Arizona, so it’s definitely a competitive area to own and operate a course. But I think bringing out new people who would have never visited us anyway is one of the best things we’ve ever done. Footgolf brings out a crowd that probably didn’t know we were here.”

That sport is finding a niche. There are currently five courses in Arizona that offer footgolf, according to the American FootGolf League website.

At Shalimar, footgolfers share several fairways with golfers, are mixed into afternoon tee times and pay the same greens fees. It took awhile for regular golfers to get used to the new game, but now, according to both Szymanski and Lentino, most see how seamlessly they go together and the new life it’s brought to the course, with tournaments and leagues bringing numerous players and fans.

Phoenix resident Robert Morales played in a group of seven with his wife and friends for the first time in February. Morales thought the game was a great way to combined his past experience playing golf with his group of friends, who all had soccer experience.

While the game certainly had its challenges, Morales said the group had enough fun that they are considering playing other footgolf courses across the Valley.

“It was fun and relaxing in the sense that you didn’t have that type of strictness as in golf,” he said. “Because we could all go have a good time and play together we definitely all want to go back again.”

Footgolf not only brings new people to the course, but it’s also getting some interested in playing the traditional game.

“I’ve seen, more so this year than last, that it’s kind of gone vice versa,” Szymanski said. “Someone has come and played footgolf here … and then came and played golf here as well. I’ve actually seen it the other way where someone comes and plays golf here but sees footgolf and thinks that might be fun as well.”

Where footgolf has succeeded in updating the game to attract young people and generate revenue, Topgolf has done the same for getting clubs into the hands of more people, even those who have never golfed in their lives.

At Topgolf’s Scottsdale and Gilbert locations, players take aim at a variety of bright targets spread across what looks like a traditional driving range. Groups and individuals play a number of different games while tracking their score and shot statistics on a panel at their tee box.

“We have a really good mix of people,” said Trisha Smith, marketing manager at Topgolf in Scottsdale. “While 50 percent or more of people are telling us they’re not avid golfers … we have a good mix of social seekers, avid golfers, people who are just curious about the place or the game, so it really does appeal to everybody.”

The relaxed atmosphere that integrates a bar and restaurant is a perfect way to introduce people to the game and keep them coming back. Eventually, it might lead them to a real round of golf, according to Jesse Hughes, a PGA-certified instructor and the director of instruction at Topgolf in Scottsdale. Topgolf instructors use technology to give positive feedback immediately to students, keeping them motivated.

Not only is Topgolf bringing in a number of players at different skill levels, it’s getting young people interested in the game as well, according to Hughes. He says Topgolf has 25 kids per week during the summer for a nine-week golf academy. And there is an after-school program during the rest of the year.

“Topgolf is definitely going to grow the game,” Hughes said. “Some of my students I’ve personally brought out to the golf course for the first time ever, so they’ve gone from being completely a non-golfer to actually playing on the course from here at Topgolf.”

Not everyone is as convinced about what these updates might be doing to help grow the game. Bob McNichols, owner and operator of Longbow Golf Club in Mesa, believes Topgolf is more of an entertainment venue, like a movie theater.

To him, the lights, targets, automatic scoring and large restaurant certainly bring in people who like to use electronic devices, but it’s not like the actual game of golf at all.

“Now, a lot of people think that’s good that there is a way to get people interested in golf by going to a place that has games as the metaphor for the golf industry itself,” he said. “But unless they take that experience and come out to the golf course and like what they find on the golf course, they’re not going to be happy with it.

“No, it hasn’t hurt the golf industry, but I’m not sure it encourages more people to learn the real game of golf.”

Most in the golf industry agree that the game needs to find new ways to reach younger generations of golfers. However, they don’t always agree on how to go about it.

Some, like Tom Loegering, who is the CEO at Sun City Country Club, believes that golf has characteristics that have drawn people to it for hundreds of years. He would rather promote those aspects of golf.

Loegering doesn’t dislike updates like footgolf or Topgolf, but he believes the game’s values are important when bringing young people to the game. Loegering founded the Golf Program in Schools (GPS) that started introducing students in the Peoria Unified School District to the game last April.

Loegering’s goal with GPS is to reach high school students and educate them about the lifelong benefits of playing golf, values it teaches and opportunities it can open up in business. Those benefits can include a college education for students good enough to earn a scholarship.

GPS students first learn the basics from PGA-certified instructors at their school before taking a field trip to Sun City Country Club to walk the course, hit the driving range and practice their short game.

Instead of relying on things like technology, GPS highlights what people of all ages can learn from the game and use in their life. Throughout the process, Loegering emphasizes respect, the personal relationships golf builds and the persistence required to improve.

“Our program is not really teaching kids how to play golf, it’s introducing them to golf,” Loegering said. “We’re not just teaching golf, we’re teaching life lessons from golf: honesty, integrity, respect, courtesy, judgment, math skills, how to socialize, how to talk, how to shake hands and look people in the eye, how to talk from your heart and not from your fingers or thumbs.”

More than 800 students have heard the message so far, and GPS is expected to reach 3,200 students in seven high schools this year, primarily teaching freshmen in required physical education classes.

While there are programs like The First Tee that introduce the game to young kids, Loegering hopes his program can catch anyone those programs might miss. Even in its brief time, GPS has found success with the teachers involved and the kids who play. Some have joined their high school golf team after being introduced to the game by the GPS program.

With participation numbers for the game down, the introduction is building a foundation for the future that would have otherwise been lost.

“When I first heard we were going to have to golf, I thought, ‘This is going to be boring, it’s only for old people, kids don’t do that stuff,’ ” said Zhela Sabier, a freshman at Peoria High School who had never golfed before her time with GPS.

“When we first got into it, it was actually really fun and now that I’m here, I wish I knew about it before.”