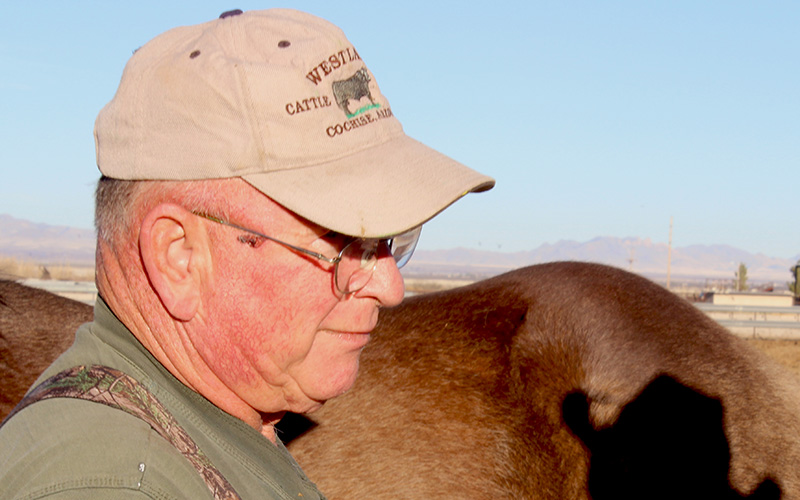 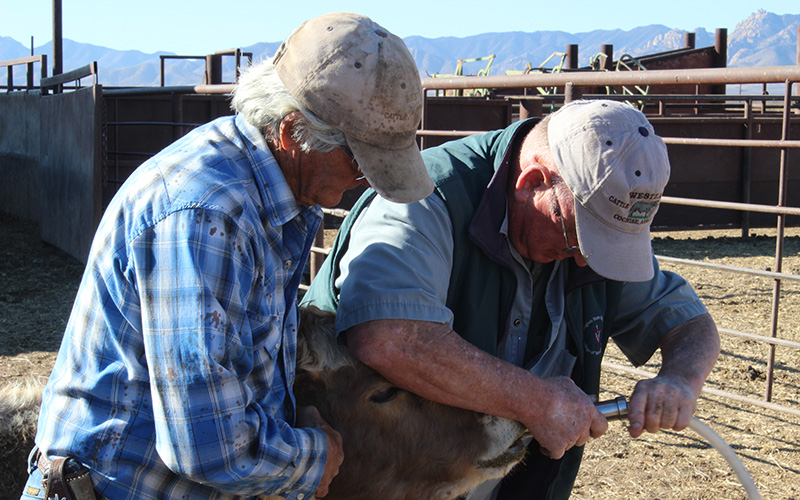 Thrasher (right) examines a cow with a colleague. He commonly travels 40 to 80 miles to visit ranches. (Photo by Amanda Ames/Cronkite News) 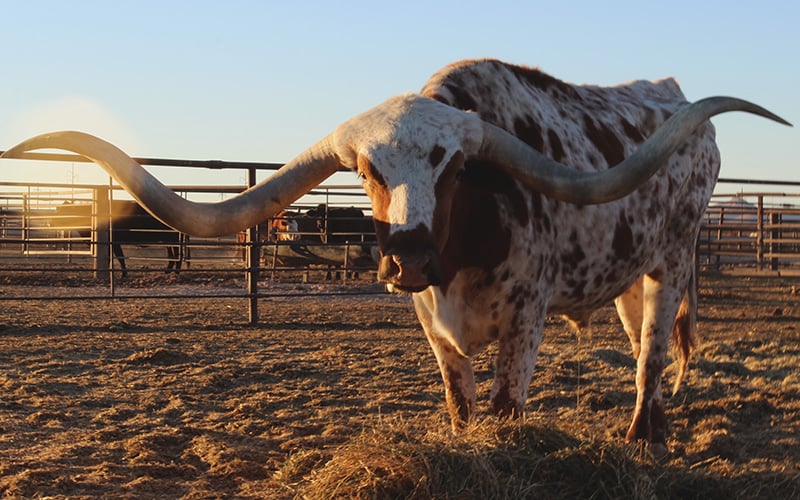 Longhorn cattle and other large livestock are becoming increasingly vulnerable to disease and death due to a lack of food animal veterinary practitioners. (Photo by Amanda Ames/Cronkite News)

According to the latest U.S. Department of Agriculture Census, more than 1 million food animals are raised within the state’s borders. But there are only 30 USDA-accredited predominantly food animal veterinary practitioners to care for them, 21 of whom reside in a single county. Another nine work across six different counties, leaving eight counties with none.

“It means we are much, much more exposed to a number of exotic pathogens, foot-and-mouth disease for one, which wouldn’t just shut down our animal economy, it would shut down all of our [agricultural] production, but it would also shut down all of our tourism,” said Dr. Shane Burgess, dean of the College of Agriculture at the University of Arizona.

“I know this because I worked in the foot-and-mouth disease outbreak in Great Britain in 2001, and that’s exactly what it did,” he said.

For the last 45 years, Arizona veterinarian Gary Thrasher has practiced veterinary medicine on large food animals in rural Arizona, with an office located in Cochise.

“It’s quite a bit different from when I went to school, which seems like the Dark Ages to a lot of people. When I was in school the majority of veterinarians were what they called mixed rural practices, where they did small animals as well as livestock, cattle and horses,” said Thrasher.

Today, this shift away from rural veterinary practice could have severe consequences on the state’s $17 billion agriculture industry and its overall economic health.

Arizona is no exception.

According to Thrasher, a large number of food animal veterinarians in the state work for dairies, mostly in urban areas.

“As far as beef cattle [practitioners] that actually operate in the rural areas where the ranches are … you can count them on one hand, that are left,” he said. “And most of them are creeping up in age pretty quickly.”

The Arizona Veterinary Medical Association’s president and a practicing veterinarian, Jim Maciulla, said those few vets will soon retire with no others to fill their place.

“The James Herriot days are probably behind us where a guy or a girl gets in a truck and does a little bit of everything,” Maciulla said.

The Office of the State Veterinarian also works to protect the animals, as well as the public, within the state by detecting, containing and eradicating livestock diseases. But due to a lack of funding in the state’s Department of Agriculture, staff levels have fallen.

“The Office of the State Veterinarian, and really the entire Department of Agriculture, is very lean in terms of staff levels. There’s not enough people to do the work,” said Susan Gale, the acting state veterinarian.

Gale said the department relies heavily on practicing veterinarians out in the field. Half of Arizona’s cattle are on range, or freely roaming around thousands of acres of ranchlands, the very places with the fewest vets, she said.

And while the Arizona Livestock Incident Response Team, or ALIRT, was designed to minimize the impact of livestock disease by responding to unexplained livestock deaths, field veterinarians are still critical to detecting problems.

“We, as a society, have come to expect and assume a wholesome, affordable, safe food chain, and veterinary medicine is a real tantamount part to that. And we may not be able to continue at that moving forward if we don’t address this need for practitioners in the field,” said Maciulla.

Yet, even though there is a clear need for practitioners in these areas, few are coming.

“The veterinary work that I do, that people expect of me, is a lot of traveling, a lot of away from home, a lot of overnights, a lot of traveling after dark. In these areas we’re out 40 miles out on a dirt road real commonly, most of my calls are about 80 miles to get to the ranches,” said Thrasher. “I seldom ever go on vacation … we have calls almost every holiday.”

Veterinarians from metropolitan areas often are not attracted to these rural communities.

“If we look at the demographics of each year’s starting class, we’re choosing 80-plus percent from metro areas, and consequently, they’re going to want to go back and practice there,” said Maciulla.

Another problem is student debt.

“The cost of veterinary education has gone up tenfold in the last 10 years, and certainly inflation hasn’t matched that. So we’ve dug a pretty big hole. And the way to get out of that isn’t to go into rural practice,” said Maciulla. “A charismatic individual with a lot of heart and a lot of desire to fill that need isn’t going to last very long, unfortunately.”

Midwestern University, a private school in Glendale, accepted its first cohort of students into its new veterinary medicine program in August 2014. However, the estimated total cost of the four-year program is more than $300,000, according the university.

It is the fifth-most expensive option for Arizonans, according to data from vinfoundation.org.

“The trouble is that if you’ve got a $300,000 debt you just can’t afford to be paid less. You have to go where the highest-paying jobs are,” said Burgess. “So even if you wanted to go back to rural Arizona, the system doesn’t enable it, doesn’t allow it.”

Burgess hopes the school will get its accreditation in time to accept students in August.