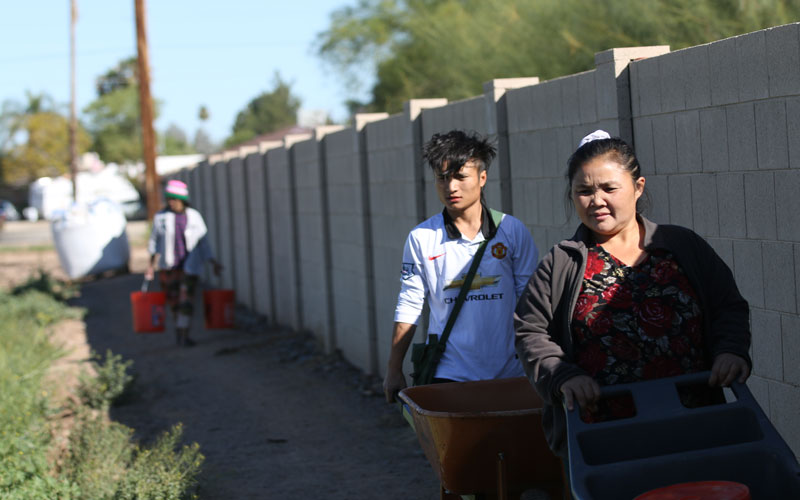 Lucy Gray, 55, from Burma, Ya Ro Moo, 24, from Burma, and Eh Say, 41, from Burma, move manure to an empty field for fertilizing. (Photo by Josh Burton/Cronkite News) 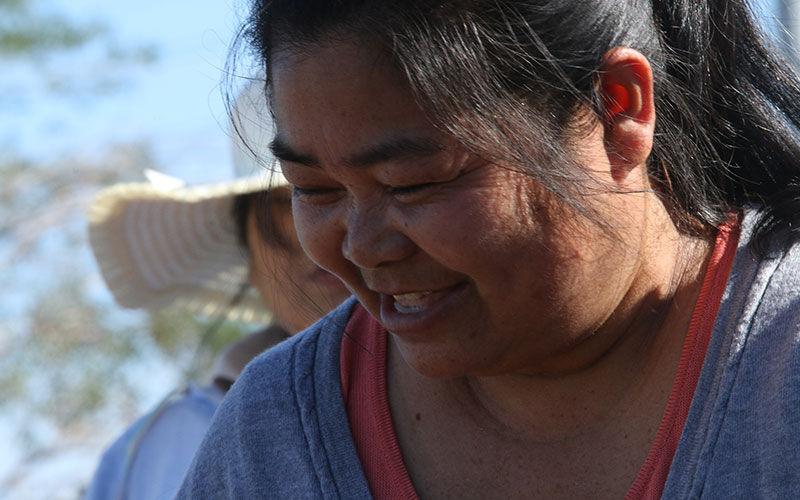 A light moment for Say Wah Lay, 51, from Burma, during a planting work day at the Cross-Connection Community Garden. (Photo by Josh Burton/Cronkite News) 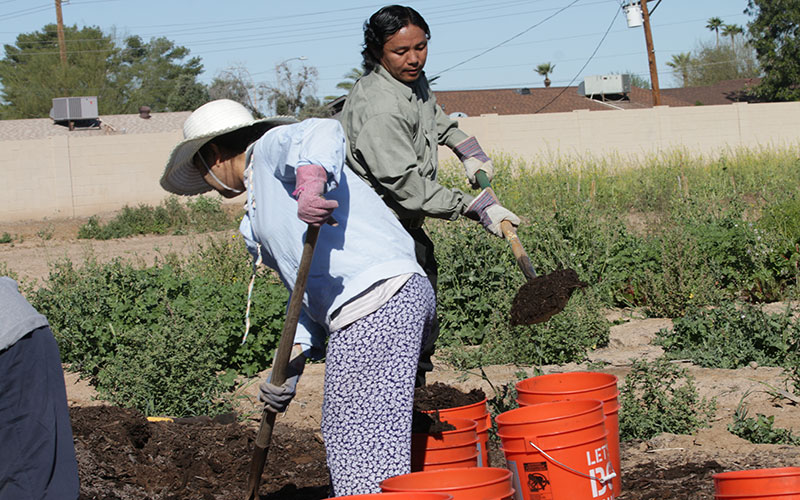 Lucy Gray, 55, from Burma and Dhan Shuba, 45, from Nepal, prepare to fertilize this season’s crops at the Cross-Connection Community Garden. (Photo by Josh Burton/Cronkite News)

Koirala and his parents have been growing spinach and other produce in the Cross-Connection Community Garden, which is part of the International Rescue Committee’s New Roots program. Not too long ago, this refugee who once farmed within sight of Mount Everest thought his vegetarian family would have to live without fresh produce in their Arizona home.

“We don’t have our own land, so it’s a little difficult,” Koirala said. “But this (International Rescue Committee) is providing us this opportunity.”

Senate Bill 1004 would allow schools to buy produce from community gardens like the one where Koirala and his family farm by exempting grade schools and universities from more stringent health requirements. Under Section 36-136 of Arizona Revised Statutes, that exemption already extends to preschools and child care facilities, some of which are growing and serving their own vegetables.

“When a farmer can’t sell everything he has at a farmers market, he would be able to sell that possibly to a school,” said Caleb Stephens, the International Rescue Committee community and economic development manager.

Opponents to the bill include the Arizona Department of Agriculture, which wants all growers certified, and the Department of Health Services, which cites concerns about tracing contaminated food to the source.

“It’s not a question if an outbreak will happen,” said DHS Chief Legislative Liaison Shannon Whiteaker. “It’s really when.”

“In our society we’ve become so overcautious, we want to create this utopia society where everything is perfect,” Farnsworth said.

The refugee community of which Koirala and his family are a part is made up in large part of low-income Arizonans. In the community garden, they are able to grow their own produce for only $50 a season, farming fresh produce that can often be out of reach in low-income areas, according to a 2011 report from the government initiative Let’s Move!

And for refugee farmers like Koirala and his family, the rows of eggplant, melon and spinach remind many of their ways of life back home.

“They’ve been doing this for years and years back in their country,” Koirala said, glancing at his parents waiting with their baskets of spinach. “So when they got the gardening program, they were so happy. They love what they do.”

SB 1004 passed in the Senate on Feb. 22 and is now pending in the House of Representatives Agriculture, Water and Lands committee.