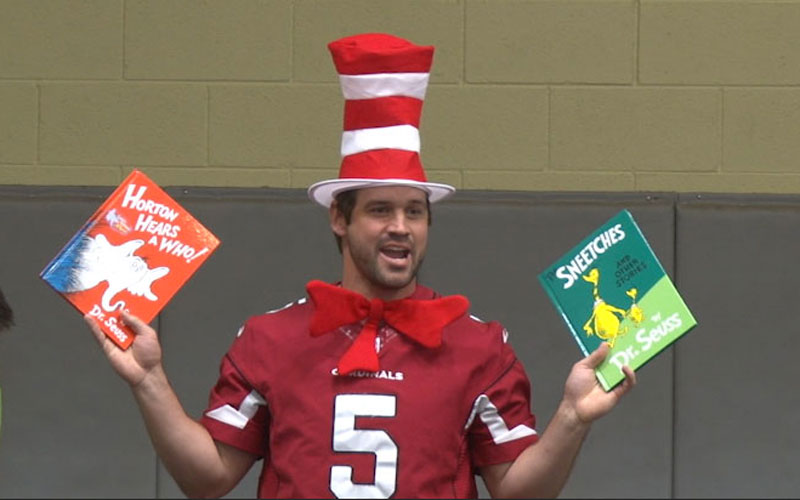 But, the jerseys were not the only red and white in their attire.

Equipped with the Cat in the Hat’s signature striped hat, tie and gloves, the players traded in footballs for books and read to students Wednesday in part of Read Across America Day at the Salvation Army’s Kroc Center in south Phoenix.

In honor of what would have been Dr. Seuss’s 112th birthday, the athletes read “The Lorax” and “The Sneetches,” as well as encouraged children to read on their own.

Stanton said he understands the importance of reading at a young age and makes sure that his 3-year-old son has a book in his hands every night.

The quarterback has been involved in the Read Across America program since his days at Michigan State.

“It used to be really stressful to get in front of kids and reading because you know you have to be able to interact with them, Stanton said. “I just try to make it fun. I try to involve them with it and show them the pictures and let them ask questions.”

Bethel agrees that reading in front of children is quite the challenge, but what is more difficult for the athlete: Playing football in front thousands of fans or reading Dr. Seuss to children?

“I definitely say Dr. Seuss because some of those words. He throws some make-believe words in there, and it definitely can get kind of confusing sometimes but it’s fun. It’s always fun,” Bethel said.

Gov. Doug Ducey also made an appearance, reading his favorite Dr. Seuss book, “Oh, the Places You’ll Go.” The governor also encouraged children to read, but statistics show it is not the first activity they are pursuing.

According to literacyconnects.org, 13 percent of Arizona children starting kindergarten meet benchmark early literacy skills, and 74 percent of fourth-graders are not proficient in reading.

While individuals across the country stressed the importance and fun of reading, Bethel admits that reading was not the first thing on his mind when he was young.

“Unfortunately no. I think I became more of a reader after I got out of school than I was in school,” Bethel said. “I definitely wish I would’ve read more.”

The cornerback says that events like these would have encouraged him to pick up a book, and he wants to encourage children who were not at the event to do the same.

“Just open up a book and get your imagination going. You’ll be surprised what you can come up with and how imaginative you can be if you start reading a little more and let your mind wander in a good way,” Bethel said.