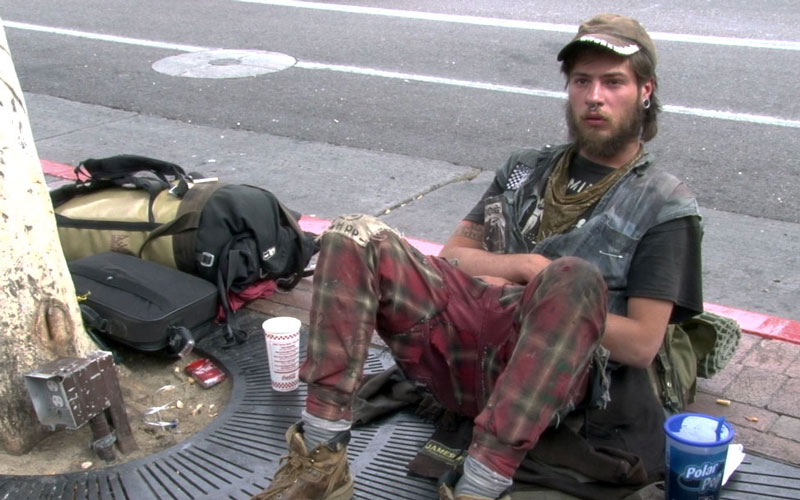 Jeremy Hill, describes himself as a squatter who travels from city to city. (Photo by Alexis Dominguez/Cronkite News)

The ordinance, expected to come before the council in April for a vote, would allow police to warn violators they have to move to a bench or somewhere else or be fined $100. If it’s approved it could take effect by May.

A similar ban was in place for 15 years but was lifted two years ago after panhandlers and people lying on sidewalks dropped. Since 2014 there has been a 200 percent increase in the amount of people sitting and lying on sidewalks, according to council documents.

“It’s invasive and it’s off putting,” said Peter Crocoll, a property manager in downtown Tempe. “It tends to drive patrons away. It’s like almost every street corner there is somebody trying to get something.”

Jeremy Smith, who said he asks people for money on Mill Avenue and describes himself as a squatter who travels from city to city, says he believes the proposal will not solve any problems.

“Where are we going to go?” Smith asked. “They’re going to give us a citation and we won’t be able to pay it.”
The ordinance is meant to clear sidewalks, not drive up citations, said Kate Borders, president and executive director of the Downtown Tempe Authority representing property owners and tenants.

“We have no intent for advocating for a lot of citations,” Borders said.

She said a study by the downtown group says only one citation was given out when it was in place from 1999 to 2014.
Violators will be encouraged to sit on one of the area’s many benches or go somewhere else, she said.

“They can go to 6th Street Park or Tempe Beach Park and sit on grass,” Borders said.

The number of times a Safety Patrol team member approached an individual who was sleeping or lying on the sidewalk increased in 2015 compared to the previous year. At the end of 2014, people were approached 834 times compared to 745 times just in the first six months 2015, according to a Downtown Tempe Authority report.

City Manager Andrew Ching said the ordinance will not be used to “to criminalize homelessness or target the homeless community.”

The city code is meant to apply to anyone who might be in violation, and not just to those who are or appear to be homeless, Ching wrote in an email.

The $100 fine is a civil citation and not criminal unless there are repeated violations, according to Ching.
“If a person does not pay a fine, the city court has ways to collect it,” said Ching. “Typically that involves payment plans.”

No organization has opposed the sidewalk proposal, according to a city manager memo.

Meetings have occurred with representatives of the COT Homeless Outreach division, Salvation Army (downtown Tempe branch) and Tumbleweed, according to the document.

The memorandum says that. “no one expressed any concern with reinstating the intent of the original ordinance, which was to address the behavior of individuals sitting and lying down directly on the city sidewalk.

The council will also discuss the issue with the new Tempe police chief in late March before deciding whether to bring it to a vote.

Council member Kolby Granville said in an email he supports a ban as long as it is applied fairly.