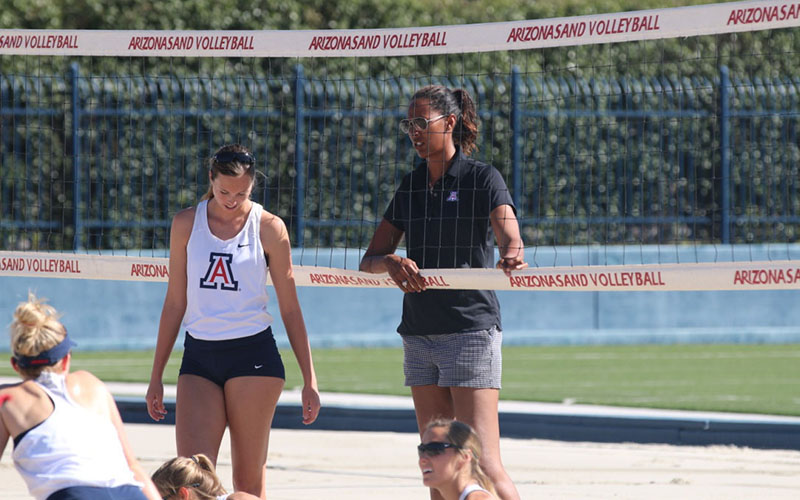 University of Arizona assistant sand volleyball coach Tayyiba Haneef-Park talks to one of her players during stretches. (Photo By Danielle Eurich/Cronkite News) 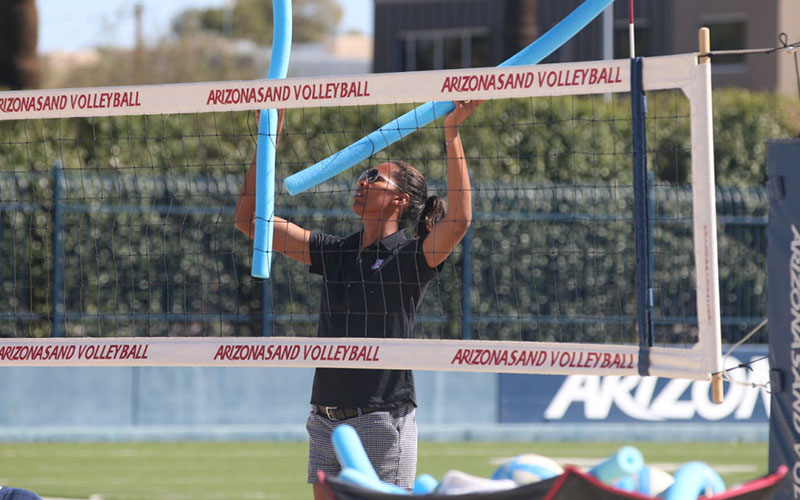 Members of the ASU track and field team warm up before practice.
(Photo By Danielle Eurich/Cronkite News)

TEMPE – Before he was Arizona State University’s vice president for university athletics, Ray Anderson helped make strides toward diversity in the NFL.

Anderson served as the NFL’s executive vice president of football operations for eight seasons and helped contribute to the creation of the Rooney Rule. The rule requires NFL teams to interview at least one minority candidate for executive and head-coaching positions.

Anderson, who is one of only 12 African-American athletic directors at a Division I school, has brought the spirit of the rule to ASU, making sure a diverse slate is included in every coaching search at the university.

“It’s not a mandate that you have to hire, but rather a strong, strong encouragement to at least take the time to listen and educate yourself and be open-minded to the fact that the world is a great place with a whole bunch of skillsets and all of them don’t necessarily have to look like you, the person doing the hiring,” Anderson said.

It is an effort that may become more formalized across college sports soon. The National Association for Coaching Equity and Development, National Consortium for Academics and Sports and The No Hate Zone have proposed the Eddie Robinson rule to the NCAA. Named for the legendary Grambling State football coach and similar to the Rooney Rule, it would require NCAA institutions to interview at least one minority candidate for all administrative and coaching positions.

“It will give race and minority candidates more exposure than they are getting right now. A lot of them are not getting considered and they’re qualified,” executive director of the National Association for Coaching Equity Merritt Norvell said.

“We know people hire people who look like them, not even consciously doing it, so now to have that opportunity, at the end of the day, they’re going to hire the best person for that position but this will of course open up opportunities for minorities and for women to at least get that opportunity,” Campos said.

Campos said she and her staff work to foster a diverse environment to cultivate these opportunities.

At the University of Arizona, vice president for athletics Greg Byrne said he encourages his coaches to make sure they have a diverse pool of candidates when hiring for a position on their staffs.

“I think one of the wonderful things about a university setting is that really the university and athletic department is a melting pot of people of all sorts of different socioeconomic backgrounds and cultures,” Byrne said. “I think that it’s important that your makeup of your staff and your coaches reflect that as well.”

Looking around the nation, Norvell has a strong opinion on how diversity is represented in college sports.

“Not very good,” Norvell said. “Colleges are not doing a very good job even though people believe they are.”

A recent study by the Institute for Diversity and Ethics in Sport supports Norvell’s assertion and suggests significant room for improvement in athletic departments across the country.

The institute’s most recent Racial and Gender Report Card: College Sport, issued in 2014, gave college sports a lower rating than any of the four major American professional sports leagues.

College athletics received a C+ grade for racial hiring practices, which was a decline from years before. In each of the four years prior to 2014, they received a B.

According to the 2014 report, whites held 86.8 percent of head coaching jobs for men’s teams in Division I while blacks held just 8.2 percent. This 8.2 percent was also a decrease from the 8.7 percent the year before.

For women’s teams, it was a similar story. White head coaches held 85.2 percent of top positions at the Division I level while for African-Americans, it was 7.3 percent.

Though many college sports are lacking diversity when it comes to coaching positions, college football is one of the lowest.

According to the 2014 report card, in all combined divisions for football, African Americans held 5.1 percent of coaching positions. This is a 0.6 percentage point decrease from the previous year.

However, each school’s athletic department appears to have created a culture to help minority assistant coaches grow into the next generation of coaching leaders.

She said she has excelled as a coach because of the mentoring she received through the years.

“It always helps to have someone who has been there in the past kind of give you a little bit of insight on what it takes because maybe you think you want to be in that position and then you hear stories and you’re not really mentally prepared for that so it’s always good to have a little bit of insight,” Haneef-Park said.

Byrne also said mentorship is important because it creates learning opportunities for minorities in the field.

“We have opportunities for mentoring within our own athletic department directly with me at times and then also at our senior staff and management level positions.” Byrne said. “Once we have a diverse pool of people within our department that we make sure we spend time mentoring and offering opportunities so they can learn and grow in their position and other opportunities.”

Mussie was hired this month at ASU and is only the second woman of color to be a head volleyball coach of a power five school, next to NC State’s Linda Hampton.

With her new position, Mussie wants to help keep the doors open for other candidates like her.

“I think it is important when you are given the opportunity to do something like this,” Mussie said. “A lot of my former teammates are still playing and they are always asking questions what’s the route, how do I do it, how do I do it the right way and I think that we’re creating a little bit of a map if you will.”

Though diversifying collegiate athletics is a work in progress nationally and locally, individuals in the field will continue to help create opportunities for minorities.