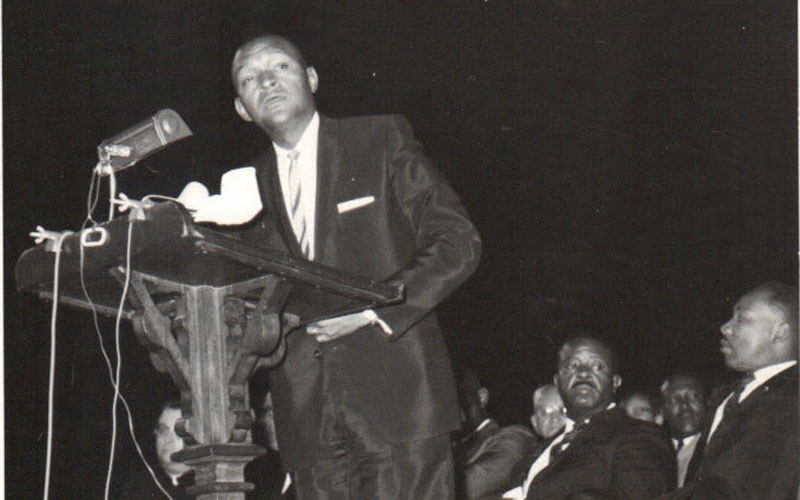 King spoke for about six minutes on June 3, 1964, saying the battle for racial justice was a “fight to save the soul of America.” His brief remarks came about nine months after his famous “I Have a Dream” speech during the March on Washington.

“People of goodwill all over the nation must come to see racial injustice as wrong and they must not rest until it is removed from every area of our society,” King told the congregants at Tanner.

The Rev. Benjamin Thomas Sr., who has been Tanner pastor since 1991, said the church has long been part of the civil rights movement.

Thomas said the church carries the legacy of not only helping African Americans but the entire community.

“In 2001, we organized our Tanner Community (Development) Corporation because we felt there was a need for the church to do so much,” Thomas said.

“We believe that as we connect with people in our community, that we’ll all have a better connection with our church and the community,” said Thomas.

Thomas strives to make a difference in the lives of people by showing them how they can better themselves.

“We are about teaching people how to fish and not just giving them fish,” Thomas said.

Dr. Warren Stewart, pastor at First Institutional Baptist Church and a colleague of Thomas, describes him as a conscientious and behind-the-scenes worker.

“He’s not the kind of leader you see in front of a microphone or on television, but he’s the kind that is behind-the-scenes that makes things happen,” Stewart said.

Thomas works on several nonprofit boards, fights for justice and equality and is a human and civil rights activist, according to Stewart. Thomas is a role model in helping others “without calling attention to yourself,” Stewart said.

“Dr. Thomas is a very humble, modest person who doesn’t seek the spotlight to do what needs to be done to help all of humanity,” said Stewart. “He just does it. If there’s recognition, fine, if there’s not, he’s fine.”