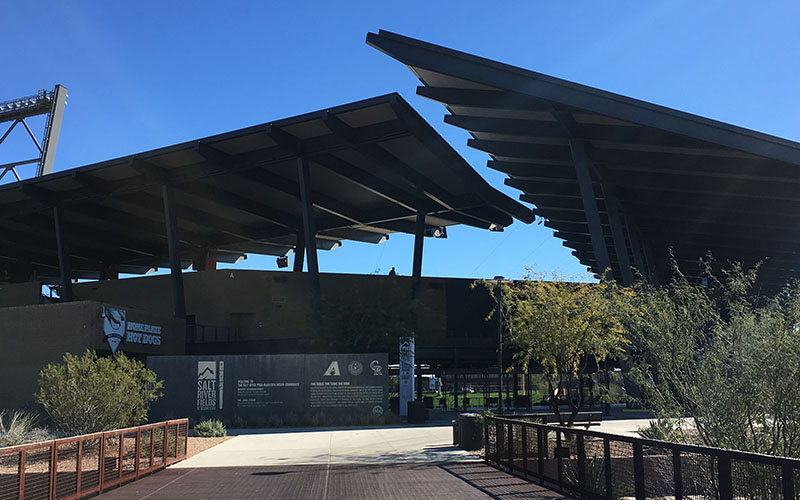 Salt River Fields at Talking Stick opened in 2011 and is the only spring training venue built on Native American land. (Photo by Justin Emerson/Cronkite News)

At opposite ends of the Valley, two cities with different histories and cultures share a common denominator: tourists flock there when the calendar flips to March in Scottsdale and Goodyear.

Cactus League baseball encompasses eight Arizona cities with 10 stadiums that are home to 15 teams. The annual six-week training season signals the end of winter, the beginning of spring and the start of baseball’s summer-long marathon.

One end of the extreme is Scottsdale – the pinnacle of wealth and tourism in the Grand Canyon State. The San Francisco Giants – and their three world championships this decade – the hometown Arizona Diamondbacks and the Colorado Rockies all call Scottsdale home.

On the other end is Goodyear – the city with the farthest west venue, known more for its farmlands than its resorts. Residing there are the Cleveland Indians and Cincinnati Reds, the two Ohio teams that travel farther than any other member of the Cactus League to arrive in Arizona.

The Giants sit in the heart of downtown Scottsdale. When Scottsdale Stadium was built, it was placed at the epicenter of the city’s commercial district. Historic Old Town is a short walk away. So is the luxurious Scottsdale Fashion Square. Restaurants and shops are filled with native Arizonans and tourists alike.

“We’re very blessed in that because of the attendance of the Giants, we have an abundance of people in the downtown area,” said Karen Churchard, the director of Scottsdale’s tourism and events department. “It’s a great fit for Scottsdale to have the Giants here and I think they would say the same about being here in Scottsdale.”

Move 6 miles northeast and Scottsdale continues to flex its muscles, showing off what Hall calls the “Taj Mahal of spring training”– Salt River Fields at Talking Stick. The facility opened in 2011 to host the Diamondbacks and Rockies and immediately became the gold standard of spring training venues.

“It’s encouraged other teams to try to create new facilities as well,” Hall said. “So you’re seeing new, brighter, bigger spring training stadiums to try to compete with ours.”

At the other end of the Phoenix metro area is Goodyear. With a population under 75,000, it is the smallest of any Cactus League city and nearly a third the size of Scottsdale.

But that hasn’t stopped it from looking to grow.

“Spring training is a national pastime and it really helps to bring attention to Goodyear and we’re getting it,” Goodyear city manager Brian Dalke said. “It’s a great tourism draw for us – we had over 150,000 fans here last year – and you continue to get the recognition for that.”

Of all the cities, Goodyear has the biggest room for growth. Though Scottsdale has no immediate plans for significant real estate expansion, Goodyear is looking to explode.

There are plans for a district 2 miles north of Goodyear Ballpark that would hold two hotels, 270 houses and nearly 400 apartments and condominiums. The city is also looking to build a five-story hotel directly behind the center field wall that would include a rooftop party deck to watch the games.

“We are growing and we’re growing very quickly,” Dalke said. “And as you grow, those additional amenities come in.”

Goodyear is the only facility that houses two teams from the same state.

“We really cater to Ohio,” Dalke said. “We really take time to give it to the fan base back there.”

All across the state, spring training is a boon for Arizona. The 2015 season brought in more than $809 million of economic impact for the state, according to the Cactus League.

And though baseball is the primary reason for spring tourism in Arizona, Debbie Johnson, the executive director of the Arizona Office of Tourism, said March visits aren’t just about watching games.

“The good thing about Cactus League visitors is they’re getting around the state as well,” she said. “They’re not just limiting themselves to Phoenix.”

Come for the baseball, stay for the rest that Arizona has to offer. That’s Johnson’s view. She said her office tries to nudge tourists to all corners of the state, from the Grand Canyon in the north to the Kartchner Caverns in the south, to all the restaurants in between.

“Families want to have that time to get away, so they come and hit a couple spring training games and do some other fun things around Arizona, too,” Johnson said.

Arizona thrives during spring training, in part because of visitors from Cactus League teams’ home cities. The most money spent by out-of-towners came from Los Angeles, Chicago, Seattle and Denver, according to a 2014 report from the Arizona Office of Tourism. Those four cities combine for six Cactus League teams.

“We want to have that hospitality for everybody so they can come and make Arizona their home, too,” Johnson said.

But it’s not just people from out of town. Nearly a third of spring training’s economic impact came from Arizona residents, and Arizonans bought 42 percent of the 1.9 million tickets sold, according to a Cactus League report.

For fans who want to come to the Valley and experience multiple stadiums, they will find it is much easier to do so than in Florida.

The longest distance between stadiums in the Cactus League is the 43 miles between Surprise Stadium and Sloan Park in Mesa, and all the stadiums are within about 20 miles of Phoenix. In the Grapefruit League, parks can be hours apart by car, highlighted by the nearly 200-mile drive from the Washington Nationals’ Space Coast Stadium in Melbourne to JetBlue Park in Fort Myers.

“The beauty of Arizona is just the close proximity,” Hall said.

Pitchers and catchers have reported and games get underway in earnest next week. And while the regular season is the one that matters, there’s something about the Cactus League that gets people – whether tourists or natives – ready for baseball to begin.

“It lasts for six weeks, and for the games themselves, people come out here and they are on vacation,” Hall said.

“Whether it’s a Tuesday at 1 o’clock in the afternoon and they’re out on the lawn and they’re wearing shorts and enjoying themselves, there’s nothing better than spring training baseball.”