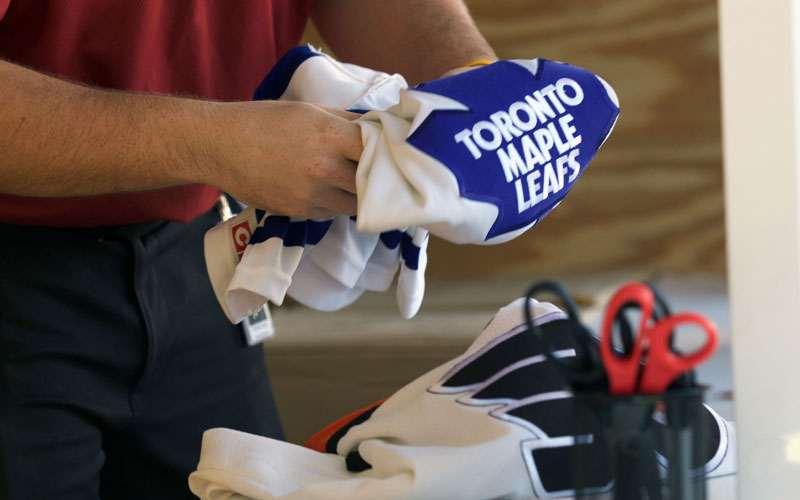 Coyotes Den staff fold jerseys before packing them away to be shipped to non-profit organization Defending the Blue Line. (Photo by Zuriel Loving/Cronkite News)

GLENDALE – Growing up in Budd Lake, New Jersey, John Pierce was a fan of the New Jersey Devils.

Now in his role as chief marketing officer for the Arizona Coyotes, Pierce is making sure his Devils jersey is being put to good use.

“My wife is bringing my Devils jersey so we can exchange and give the Coyotes youth jersey to our neighbor who is growing up in a Blackhawks household,” Pierce said.

Pierce’s jersey was exchanged Friday as part of “Raising Coyotes,” a new marketing campaign launched by the team that allows adults to trade in their hometown team jersey for a Coyotes youth replica jersey.

It’s part of an effort to expand the team’s youth fan base in a state where nearly two-thirds of current residents were not born in Arizona, according to data from the U.S. Census Bureau.

“We have people moving here from all over the country and when they move here, they bring their allegiances with them,” Pierce said. “We thought their kids need to grow up rooting for their hometown team, the Arizona Coyotes.”

Avalanche-turned-Coyotes fan Kevin Armijo of Avondale was a Colorado fan, but has lived in Arizona for 15 years and turned in his Avalanche jersey Friday night.

“It’s time to support the home team more than I used to,” Armijo said.

Pierce sees this as an opportunity to draw more young fans into the Coyotes’ pack.

For Armijo, giving up his hometown team wasn’t as easy.

“I’ve had that jersey for a long time. I was there when (the Avalanche) won their last Stanley Cup,” Armijo said. “It’s just one of those things where I can always buy another jersey.”

Pierce said the campaign is meant to highlight the organization’s differences. The program, he said, hopes to take out the opposition – but for a good cause. All the donated jerseys will be shipped to Defending the Blue Line, a non-profit organization based in Hastings, Minnesota.

“When we first came out with the program, a lot of people wanted us to burn these jerseys,” Pierce said. “We thought, ‘Wow, we can’t do that.’

The Coyotes also are trying to draw more young Coyotes fans to games. For the rest of the regular season, kids 14 and younger will be able to attend Coyotes games for free with the purchase of a regular-priced adult lower level or upper level end seat.

The Coyotes are ranked No. 29 out of the NHL’s 30 teams for attendance, according to ESPN’s attendance report. The Coyotes average 13,170 per game in Gila River Arena, which has a capacity of 18,300.

“If we can get some new generations in here and actually show them the joy of hockey, that may change the Valley,” Armijo said.

“This program is an opportunity to say: We’re here, come join us,” Pierce said.