This is similar plane that was used in the 1920s to deliver mail. It’s housed at the Commemorative Air Force Airbase Arizona in Mesa. (Photo by Ben Brown/Cronkite News) 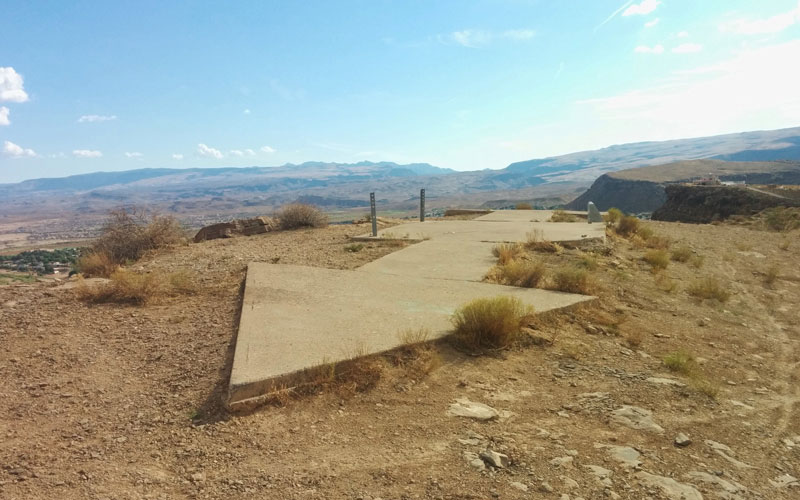 Remnants of Transcontinental Air Mail Route Beacon 37A, atop a bluff in St. George, Utah, with concrete arrow indicating the direction to the next beacon. (Photo courtesy of Dppowell via Wikimedia Commons)

MESA – Consumers today expect their deliveries to arrive within a few days – or even hours – through services like Amazon. But delivering mail cross-country wasn’t always so easy.

Billy Walker, whose father flew during the 1920s, said delivering the mail required thinking outside the box.

“They had to develop some innovative ways because they didn’t have the fancy navigational systems that developed later with GPS and things we have today,” said Walker, a pilot.

How did pilots find their way? The U.S. government installed concrete arrows they scattered across the country, from New York to San Francisco.

Arizona’s state historian Marshall Trimble said it did the job.

“They really reduced the time down to … about 30 hours,” he said. “They could get the mail across country, and that was pretty amazing.”

It was simple. “Just follow the arrow,” Trimble said. The arrows were from 50 to 75 feet and painted bright yellow so pilots could see them from the sky.

The government later added beacons alongside the arrows. The beacons “would project light for an extremely long way at night,” Walker said.

Prior to this system, the trips took several days by train.

However, the system didn’t last long. Trimble said the start of World War II is partly to blame.

“This seems kind of funny when you think about it,” Trimble said. “They were kind of worried about World War II and that the enemy pilots could be able to follow those arrows if they were coming from New York to Los Angeles.”

The government took down the beacons because of a scarcity of metal during a time of war. And this piece of American history slowly faded into the past, Trimble said.

“They sort of just fell into disrepair,” he said. “There are some remnants of them still today.”

There appears to be about 18 concrete arrows or beacons that remain in Arizona, according to a Google Maps review.

“It fascinates me, especially when I’m flying along. And I say, ‘oh there’s one of those arrows! How cool,'” Walker said.