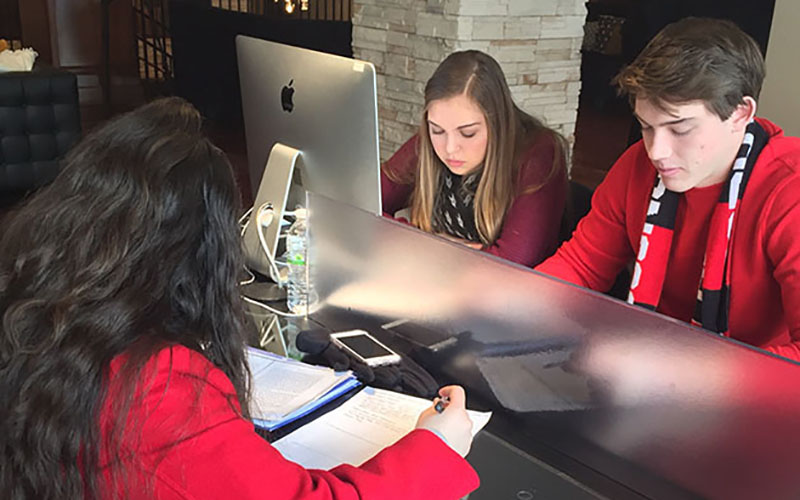 Arizona students Anna Abraham, left, Haley Pulliam and Drew Dyer do their homework in the lobby of the Renaissance Hotel where they’ve been riding out Washington’s blizzard of 2016. (Photo by Jessica Swarner/Cronkite News)

Students from Catholic schools in the Valley who have been trapped in Washington by Winter Storm Jonas take advantage of the storm’s aftermath to let off some steam outside their hotel. (Photo by Lauren Clark/Cronkite News) 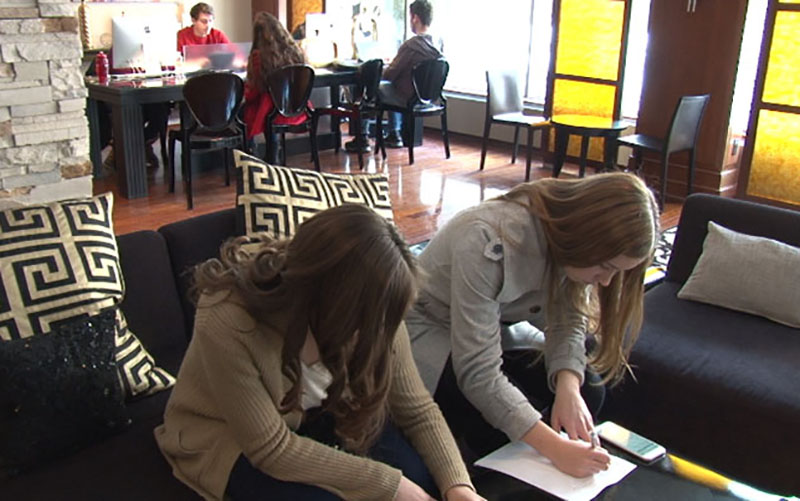 Tatym Bonheimer and Catherine Cirzan kill time doing homework in the Renaissance Hotel lobby. They were among a group of Arizona students stranded in Washington by Winter Storm Jonas. (Photo by Lauren Clark/Cronkite News)

WASHINGTON – Jen Pitera hoped that when she brought a group of students from Phoenix-area Catholic schools to Washington last week they would learn more about what goes on in the nation’s capital.

What she didn’t expect was a lesson in cabin fever.

But Pitera, the director of youth ministry at Cathedral of Saint Simon and Jude in Phoenix, and her six students were among the tens of thousands of people who were stranded over the weekend when a blizzard slammed the East Coast.

For the Arizona students, the storm was an eye-opener.

“I’ve never seen this much snow before. I’ve never worn this many layers,” said Tatym Bonheimer, a sophomore at Bourgade Catholic High School. “Five pairs of pants – that’s crazy for me.”

The storm began Friday afternoon and continued through early Sunday, dumping 17.8 inches at Reagan National Airport and 22.4 inches at the National Zoo, according to the National Weather Service. The storm, dubbed Winter Storm Jonas, tied with a February 2010 storm as the fourth-heaviest snowstorm to hit Washington since 1884, according to the weather service.

The storm, with high winds, had been blamed for more than three dozen deaths as it moved up the East Coast, according to published reports. It brought flooding and coastal erosion to beach towns.

Washington’s Metrorail and Metrobus shut down Friday night and did not reopen until Monday morning, and then with limited routes. More than 9,600 flights had been canceled since Saturday, according to the flight-tracking service FlightAware, which said Monday that there were about 500 flights already canceled for Tuesday.

Pitera’s group knew that snow was coming when they arrived Tuesday to participate in the March for Life on Friday – but they had no idea a blizzard was brewing. They marched Friday and expected to fly out Sunday, passing their time over the weekend by working on homework in the Renaissance Hotel lobby.

They found out Saturday that their United Airlines flight home was canceled, and are now hoping to return Tuesday night. In the meantime, they have been passing time by playing card games, playing in the snow, and they even ventured out into the still-uncleared streets to attend Mass.

Bonheimer said she and her friends enjoyed watching the wintry weather from their hotel rooms. They watched as a truck gradually became buried in the snow, and then again as its owners struggled to dig it out once the storm ended, she said.

They also killed time by watching rooms in the apartments across the street and making up names and stories for the people they saw consistently.

Pitera said the group was lucky to have former students in the area who warned them of the storm’s severity and encouraged them to stock up on food before the weekend. Drew Dyer, a sophomore at Brophy College Preparatory, said the group has managed to find an open restaurant and go out for a meal at least once a day, just to get out of the hotel and walk around for a bit.

“It’s nothing I could have ever imagined, that’s for sure,” Dyer said.

They weren’t the only Arizonans who found themselves spending more time than expected in Washington this weekend. A group of 47 Valley students – 27 from St. Mary’s Catholic High School and 20 from Notre Dame Preparatory High School and St. Mary Magdalene Catholic Church – were also in town for Friday’s march, and also got stuck.

Kellie Taylor, director of student activities at St. Mary’s, said the group managed to reschedule its return Southwest Airlines flight on Thursday, before the storm even began.

“We took care of it while there were still options,” Taylor said.

The group, which was staying at the Centro Maria Residence in the District, boarded a charter bus to the Baltimore-Washington International Airport for their flight Monday night.

Despite the disruption, Pitera said her group has been treated with a lot of kindness and patience over the weekend by everyone in the city, from Metrorail users who stayed calm when boarding packed trains, to hotel staff who didn’t mind the students taking up a good portion of their lobby to use the Internet.

“It’s just amazing to watch the people of D.C. support each other … and make us feel at home,” Pitera said. “We’re very grateful to everyone.”