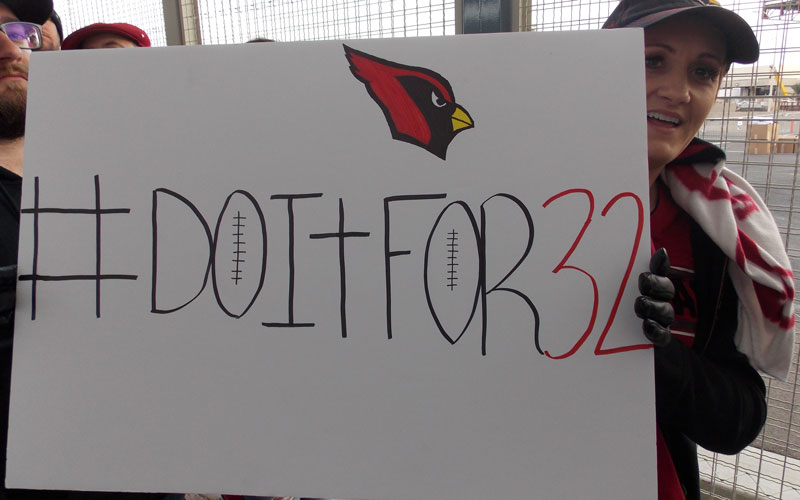 Rebecca Meyer has been an Arizona Cardinals fan for her entire life and believes the team will not only make it to the Super Bowl but win it. She holds a sign for injured Arizona Cardinal Tryann Mathiew at the Big Red Send Off before the team travels to Carolina to face the Panthers. (Photo by Torrence Dunham/Cronkite News) 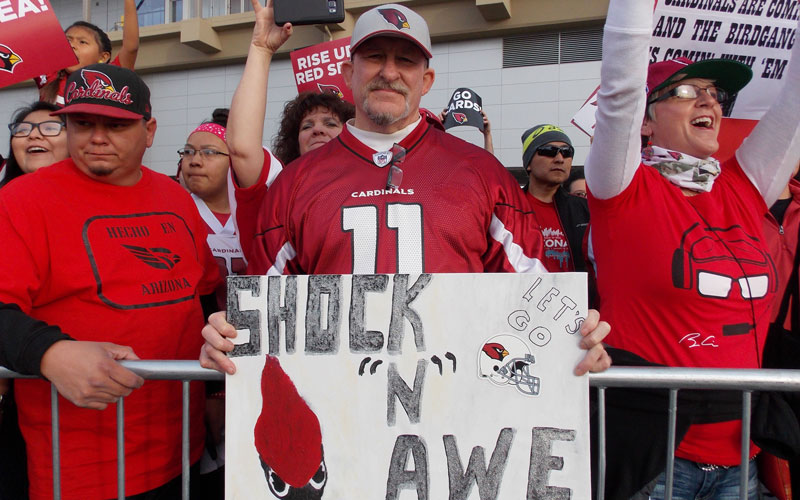 Derek Devore has been an Arizona Cardinals fan since they made the move to Arizona back in the days when the team spent their Sundays in Sun Devil Stadium. Devore said he would be doing back flips if the Cardinals win Sunday’s game against the Panthers and make it to the Super Bowl. (Photo by Torrence Dunham/Cronkite News) 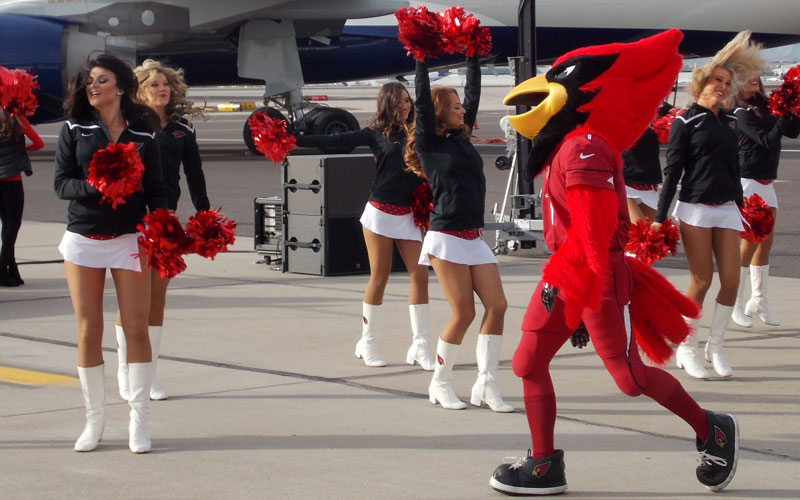 The fans who were at Sky Harbor Airport on Saturday morning to cheer on the Arizona Cardinals as they head to Carolina were ecstatic when Big Red and the Cardinals cheerleaders appeared on the tarmac. (Photo by Torrence Dunham/Cronkite News) 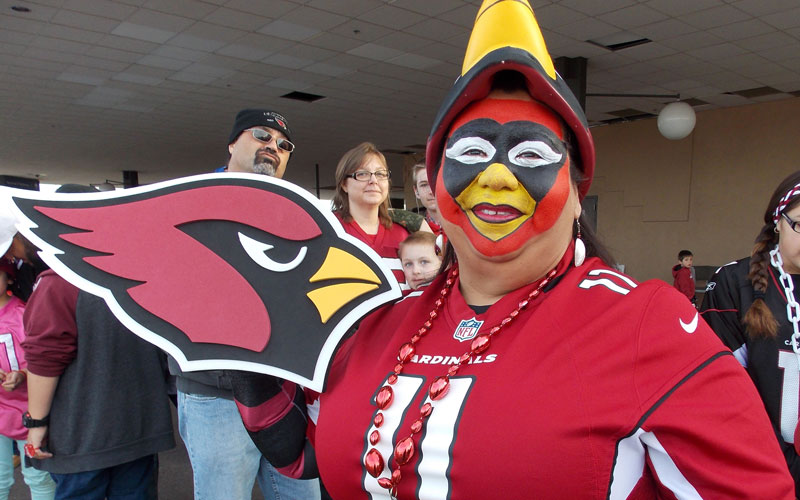 Valerie Denight has supported the Arizona Cardinals since 1988 and win or lose she will stand by her team. She believes the key for a Cardinals victory in Carolina is to stay focused against the Panthers. (Photo by Torrence Dunham/Cronkite News)

Saturday, Bill Diekmann said it, and he isn’t even a Cardinals fan.

Diekmann is a volunteer navigator at Phoenix Sky Harbor International Airport, where the Cardinals held their Big Red Send-Off rally in advance of Sunday’s NFC Championship Game against the Carolina Panthers. Diekmann typically works two shifts a week, but signed up for an extra one right away when he heard about the rally.

“These people are coming here in high spirits so it’s great to joke around with them and it’s just great to see this kind of community spirit,” Diekmann said.

Diekmann lives in Phoenix and was here when the Cardinals unexpectedly reached Super Bowl XLIII in 2009. But even that year didn’t have the same feel as this one, he said.

Optimized for desktop, laptop and tablet.

When he and his colleagues arrived at work today, he found Cardinals fans so excited that they were willing to applaud for anyone.

“They started cheering us and giving us high-fives,” Diekmann said. “Like we were the celebrities. It was cool, it really was, just to see so many people smiling.”

Approximately 4,000 fans attended the rally, according to airport officials.

The event was hosted by local radio personalities Ron Wolfley and Paul Calvisi, who spent the morning alternating between pumping up fans and introducing speakers at the podium.

Bidwill, Keim and coach Bruce Arians had their turns, as did local politicians such as Phoenix Mayor Greg Stanton, Gov. Doug Ducey and Sen. John McCain.

But of all the speakers, there was one fans came to hear from the most.

Fans began the “Larry, Larry” chants long before star receiver Larry Fitzgerald arrived, fresh off his record-breaking performance in the NFC divisional round against Green Bay, And when he finally did get off the bus and walked toward the podium, it drew the loudest applause of the day.

“We love him,” lifetime Cardinals fan Debbie Butler said. “I mean we more than love him. We worship him. I would do anything for Larry.

POLL: Who will win the NFC championship game: @azcardinals or #Carolina? #AZvsCAR #beredseered

As if his performance in that Super Bowl back in the 2009 wasn’t enough, Fitzgerald permanently etched himself into Arizona sports lore in the victory over Green Bay.

In overtime of Arizona’s 26-20 win against the Packers, Fitzgerald’s 75-yard catch-and-run put the Cardinals at the precipice of their second NFC Championship Game. Then he finished the job, taking a shovel pass from quarterback Carson Palmer two plays later and plunging into the end zone.

Fitzgerald finished that game with a postseason franchise-record 176 receiving yards and scored his 10th playoff touchdown, good for third in NFL history.

So when he took the stage, he spoke for only 11 seconds. It was all Cardinals fans needed.

“We hope to see you guys here tomorrow night so we can celebrate,” he said as he got on the plane to Carolina.
The Cardinals, with Palmer, made the same trip a year ago, losing in an NFC wild-card game to the Panthers.
“It just feels different this year,” Diekmann said. “Not sure why; it just feels different.”