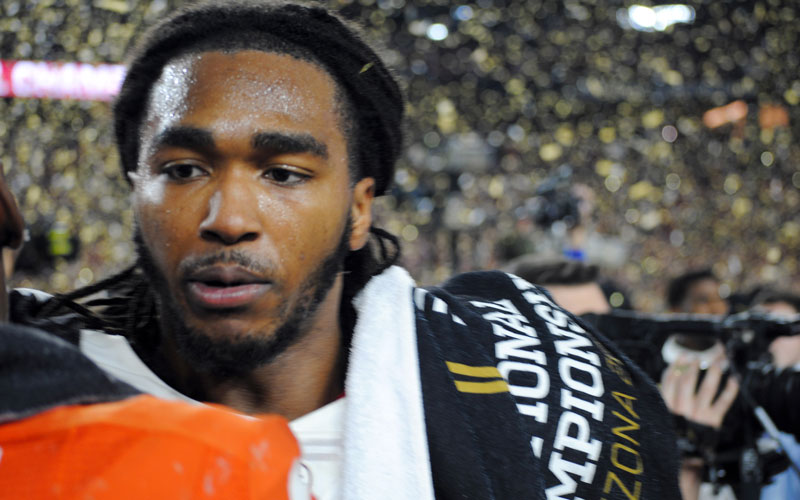 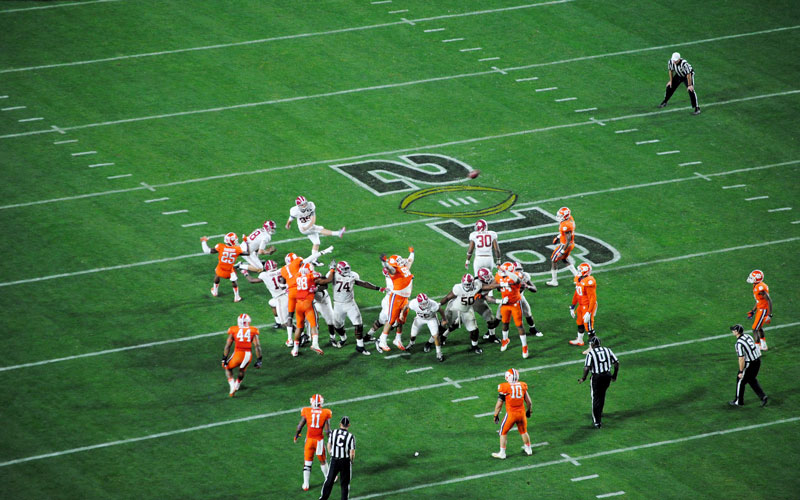 It’s a third of the game.

It’s a phrase every football fan has heard a thousand times over — special teams is a third of the game.

And that third of the game proved the difference for the Alabama Crimson Tide in capturing college football’s ultimate prize with a 45-40 victory over the Clemson Tigers on Monday at University of Phoenix Stadium. In a back-and-forth contest between the country’s two top-ranked teams, two fourth-quarter special teams plays tipped the College Football Playoff National Championship game in Alabama’s favor.

“We’re a complete team,” said senior running back Kenyan Drake, whose 95-yard kickoff return for a touchdown with 7 minutes 34 seconds to go in the game put Alabama up 38-27. “Special teams did a great job making plays.”

It was a roller coaster of a season for Drake personally, who was expected to contribute more than he was able to in the 2015 season. Drake dealt with hamstring issues early in the year and, just when he started to gain some momentum after a 100-plus all-purpose yard game against LSU on Nov. 7, he broke his arm against Mississippi State the following week and missed the next two games.

“Words can’t really describe how I really feel right now,” he said. “Everything’s so fresh right now. It’s just a testament to the team in general.”

Drake’s return was the second significant special teams play in the final 11 minutes of Alabama’s win. With the game tied at 24 with 10:34 remaining, Alabama Coach Nick Saban decided to call for a surprise onside kick after his defense had allowed the most points since giving up 43 in a defeat at the hands of Ole Miss in September.

“I made the decision to do it because the score was (24-24) and we were tired on defense and weren’t doing a great job of getting them stopped,” Saban said. “I felt like if we didn’t do something or take a chance to change the momentum of the game that we wouldn’t have a chance to win.”

Saban’s gamble worked. Junior kicker Adam Griffith hit the ball off the tee perfectly and Alabama’s Marlon Humphrey, a redshirt freshman who was selected to the freshman All-SEC team, recovered it right after it traveled the required 10 yards.

Saban made no apologies for going with the onside kick in the situation his team was in.

“It was something that I knew that we would use in this game if we needed to,” he said. “We felt like we had to win special teams in this game.”

In the first quarter, Alabama’s coaching staff in the booth recognized an opportunity for a potential future onside kick after seeing Clemson’s alignment for its kick return that followed Derrick Henry’s 50-yard touchdown run.

“We said, ‘OK, we’ve got that,” he said. “If we want to try that, we think we have a good chance because of the spacing on the field that’s available to us. So it worked.”

Clemson Coach Dabo Swinney was upset with the referees after the onside kick. After the game he said his team had run a similar play against South Carolina last season and had the ball taken away from them after not giving their opponent a chance to catch the ball before it touched the ground. Swinney was arguing that, at the time, Clemson was told no matter what, the receiving team must have an opportunity to catch the ball.

“Hey, great play by them. It was a great kick,” said Swinney, who was trying to win his first championship as a head coach after winning one as a player for the Crimson Tide in 1992. “First of all, he put it right in a good spot, and their kid did a great job of going and getting it. It was a huge play.”

The game was still tied after the recovery with just over 10 minutes left to play in the game. Clemson’s defense had the chance to hold firm and bail out its special teams but allowed the long touchdown to Howard just two plays later.

“So it was a combination of mistakes,” he said. “It was one thing to give up that play but that doesn’t mean you don’t go out and do your job on another play.”

Saban has now won five national championships in his career, including one at LSU, and has earned the right to make some mistakes but he said he still knows what would have happened if his decision that ultimately helped win Alabama its 16th national championship didn’t go as planned.

“Let me say this,” he said to a room full of a reporters after the game. “If we wouldn’t have got that, y’all would be killing me now.”