The “Lot 2 Crew” sings the Clemson fight song in the parking lot of University of Phoenix Stadium hours before kickoff of the College Football Playoff National Championship game.
(Photo by Bill Slane/Cronkite News) 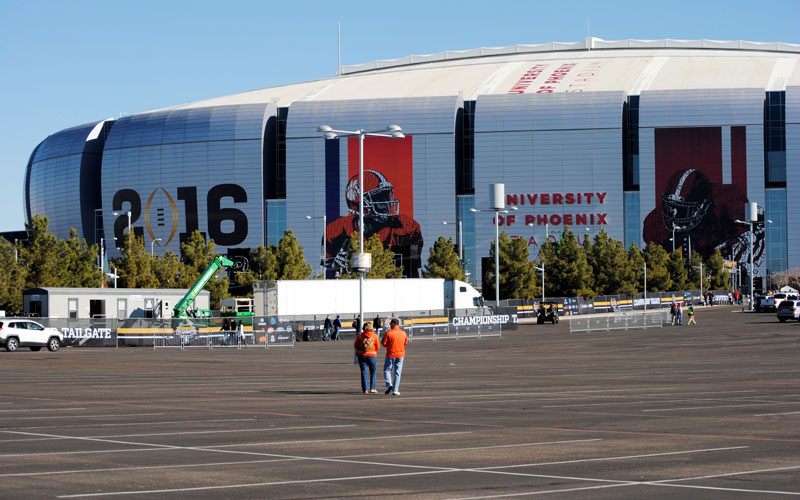 A pair of Clemson fans are among the first in the parking lot of University of Phoenix Stadium just minutes after they opened on Jan. 11 prior to the College Football Playoff National Championship game. (Photo by Bill Slane/Cronkite News)

It just so happened to be the Orange lot. In fact, there was a lot more orange than Alabama crimson in the tailgate area among early arrivers.

“We bought our tickets and planned this trip in October,” Kathleen Hassig of Northern California said before the Tigers played Alabama on Monday.

Hassig, an alumna of Clemson who was a Tigers cheerleader, was more confident than most fans. Clemson rarely makes trips past Texas and has never played in Arizona. The opportunity was too good for Hassig to miss out on.

Although she needed only to see her Tigers beat Notre Dame on Oct. 3 before going all in, most fans waited until later.

Matt McKinley and Coleman Dove of South Carolina waited until the Tigers defeated the Miami Hurricanes two weeks later. But they waited until New Year’s Day, after Clemson’s Orange Bowl victory, to purchase their plane tickets to Arizona.

“We flew from Charlotte, North Carolina, into Dallas, into Albuquerque and into Phoenix,” McKinley said. “So we got to see a lot of cool airports along the way, but we’re here.”

McKinley believes fate is on the Tigers side in the championship game.

“From Death Valley, our stadium, to Glendale it’s exactly 1,981 miles,” he said. “The last time Clemson won a national championship was in 1981. Coincidence? I think not.”

Actually, Clemson Memorial Stadium and Glendale are 1,978.9 miles apart from each other. But who’s checking their GPS? Maybe the Crimson Tide. It just so happens 1978 was the year Alabama won its 10th national championship.

McKinley and Dove also were the keepers of a certain Clemson road game tradition. The two carried around a number of $2 bills – but not normal $2 bills. Stamped on either side of Thomas Jefferson is the Clemson Tigers logo, a tradition dating back to 1977.

That year, as a protest when Georgia Tech refused to play the Tigers in football, students and alumni of Clemson stamped $2 bills with the tiger paw logo and used them in Atlanta to show how much money Clemson fans spent at athletic events. Fans today still use these during road games.

The Orange lot of University of Phoenix Stadium was full of diehard fans of the orange and purple, including Eddie Plowden and the “Lot 2 Crew” from South Carolina. The group has been tailgating in Lot 2 of Clemson Memorial Stadium for 25 years and even rented an orange Ford Mustang to show off their school pride in Arizona. They were the self-proclaimed “best tailgate in the lot.”

Then there were fans like Albert Shealy, who after missing a game in 1981 did not miss another until 2013. During that span, he attended more than 400 consecutive games, including two in the National Olympic Stadium and Tokyo Dome in Japan.

Shealy has cut back to attending only home games, and he says he can’t remember the last one he missed. But he couldn’t resist taking his loyalty back on the road for the national championship game.