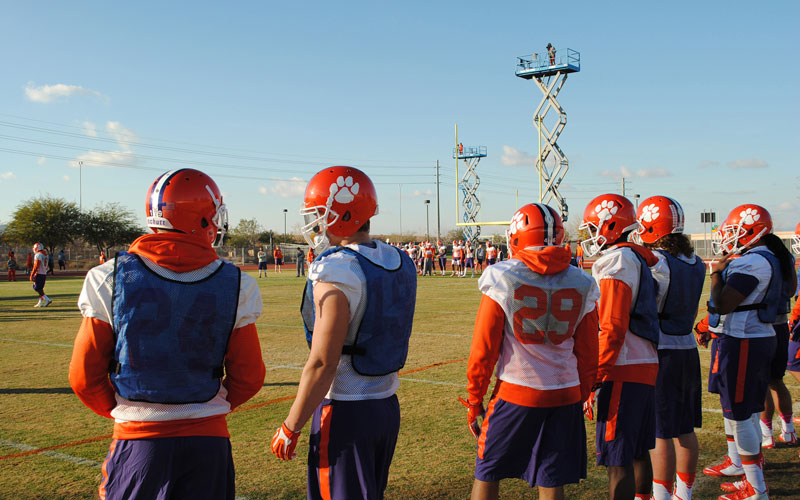 Several Clemson players rest on the sidelines during practice at Scottsdale Community College on Saturday. (Photo by Bill Slane/Cronkite News) 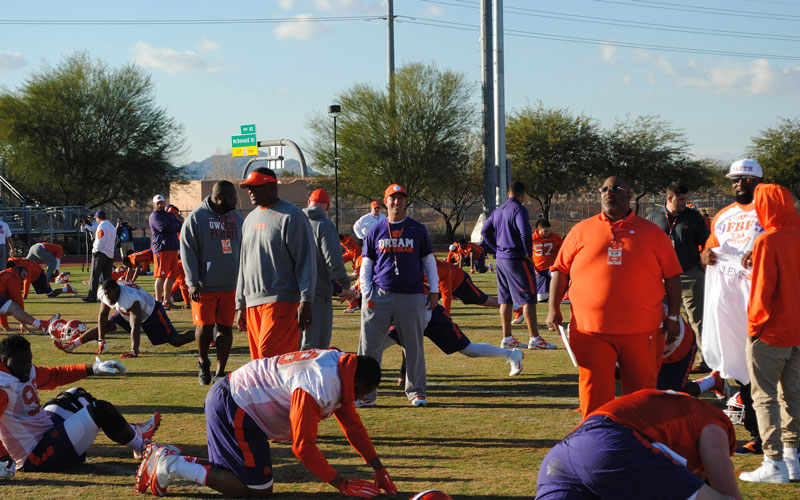 Clemson head coach Dabo Swinney is all smiles as he watches his team streatch before practice at Scottsdale Community College on Saturday. (Photo by Bill Slane/Cronkite News) 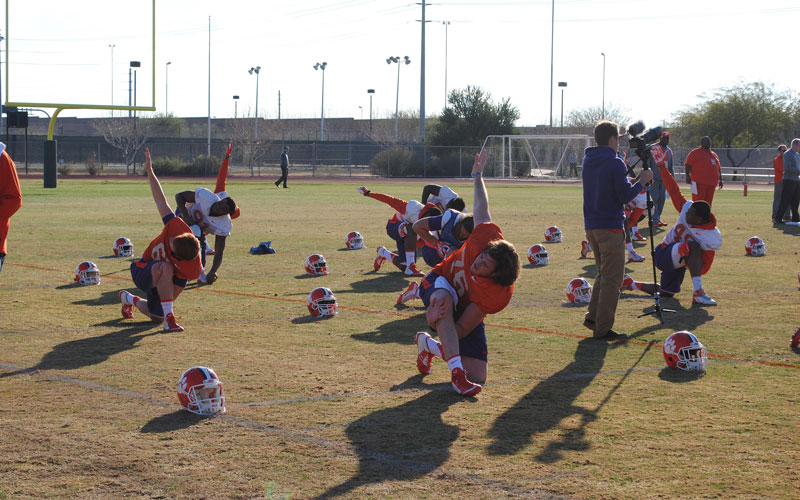 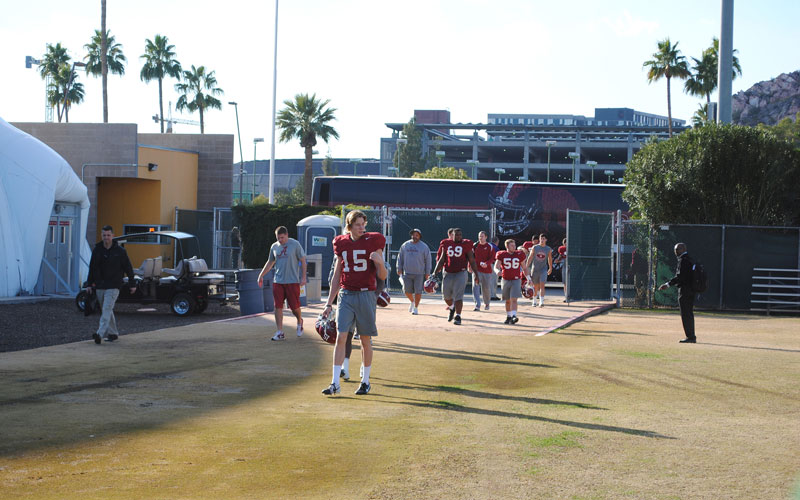 Alabama football players jog onto the field at the Arizona State football practice facility before their practice on Saturday in Tempe. (Photo by Bill Slane/Cronkite News)

“It’s been fun just hearing my teammates go like, ‘Wow, mountains,’ they’ve like never seen mountains before,” said Murray, a California native who last visited the state as a member of the Oregon State Beavers in 2013 before he transferred to Tuscaloosa last year.

Murray is an outlier for Alabama and Clemson, the two schools who will battle for college football’s national championship Monday in Glendale. The desert is a mostly foreign place for these two programs from more than 1,600 miles away.

There are no players on either team’s starting roster from Arizona, so for many of them this is their first taste of the Valley of the Sun, or in the case of this week, the cold and rain.

Clemson has played in 1,203 football games in its history, but it has never before played in the state of Arizona. The last time the Tigers even played a game west of the Mississippi was in 2004, when they paid a visit to College Station to play Texas A&M.

Alabama last played in the Grand Canyon State 25 years ago, against Louisville in the Fiesta Bowl on New Year’s Day 1991.

Ryan Kelly, a senior captain on the offensive line for Alabama, has never been west of Texas, but Arizona gave him a warm welcome as he and his team arrived at Phoenix Sky Harbor International Airport.

“When we landed, and saw the mountains it was pretty cool. I think the sun was setting and it was a pretty cool sky,” Kelly said. “So far it’s been a lot of fun. Win this national championship and then it will be even more fun.”

Mullaney, from Thousand Oaks, California, played at Sun Devil Stadium as a member of the Beavers in 2013 and he was happy to be back in the Valley.

“Personally it’s awesome, I have a ton of people coming to the game,” he said.

Several players took note of Arizona’s muted desert color palette, both on the ground and on the buildings, a stark contrast to the lush green landscapes back in Tuscaloosa and Clemson.

“Everything’s tan,” Clemson offensive tackle Mitch Hyatt said. “I feel like they only have one color here.”

Tigers guard Tyrone Crawford and his teammates have already taken to teasing Arizona for its style choices.

“One of our teammates, Justin Falcinelli, kind of joked around and was like, ‘I guess that’s the only paint scheme they had was desert brown,'” Crawford said. “It’s a little different.”

Despite the enclosed environment that is University of Phoenix Stadium, playing in the desert can have an effect on one position, especially if they have never played here before — kickers.

Alabama kicker Adam Griffith played in Arizona once in the past, in the Semper Fidelis All-American Bowl game at Chase Field in 2012, so he will have a slight edge over his counterpart when it comes to experience in the desert.

“People tell me that the ball travels a little further because the air is a little thinner, but I have no idea,” he said. “I’m just going to treat it like a normal game.”

When asked about his impressions on Arizona, and kicking in Arizona’s climate, Clemson kicker Greg Huegel wasn’t focused as much on the scenery in Arizona or what challenges or advantages it brings a kicker. He was more focused on what being here means as a member of the Clemson Tigers.

“Just taking everything in,” he said. “And living in the moment.”