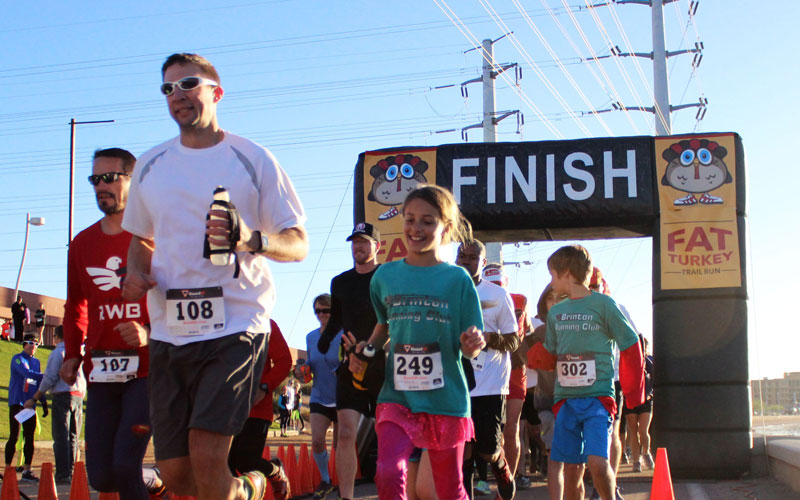 Runners of all ages, genders and levels of experience are beginning to take up the sport, thanks to races such as the Fat Turkey Trail Run. (Photo by Evan Webeck/Cronkite News) 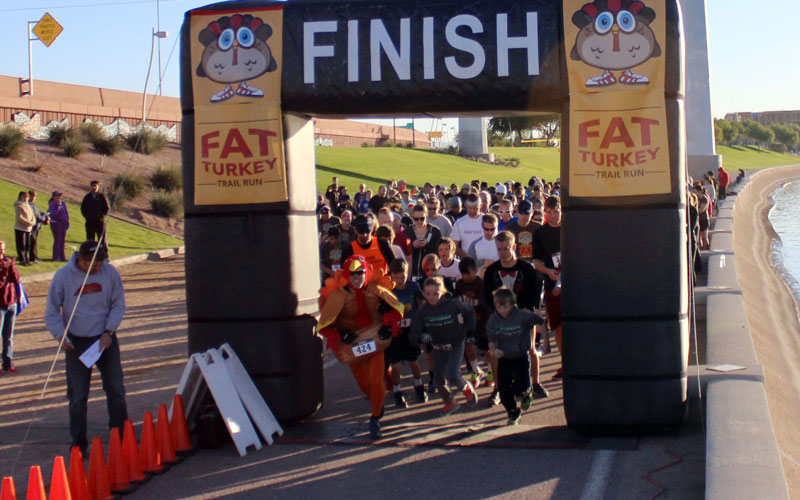 Runners, led by the “Pace Turkey,” begin the 5k portion of the Fat Turkey Trail Run in Tempe on Nov. 28, 2015. (Photo by Evan Webeck/Cronkite News) 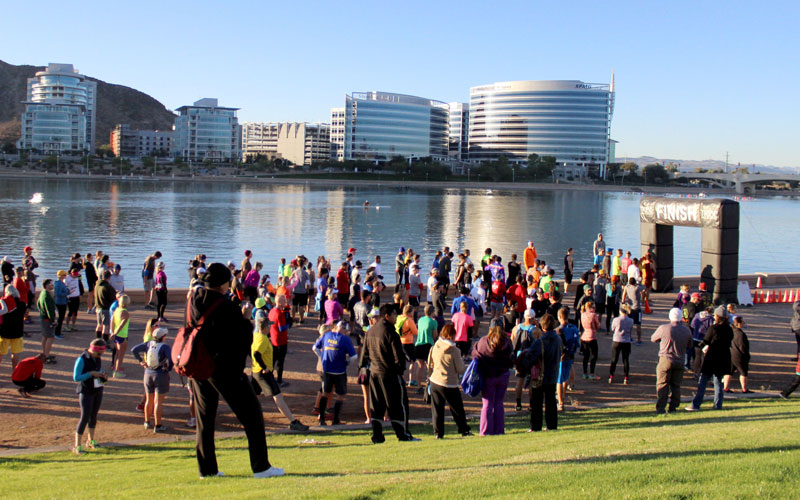 Runners gather at the starting line of the Fat Turkey Trail Run in Tempe on Nov. 28, 2015. (Photo by Evan Webeck/Cronkite News) 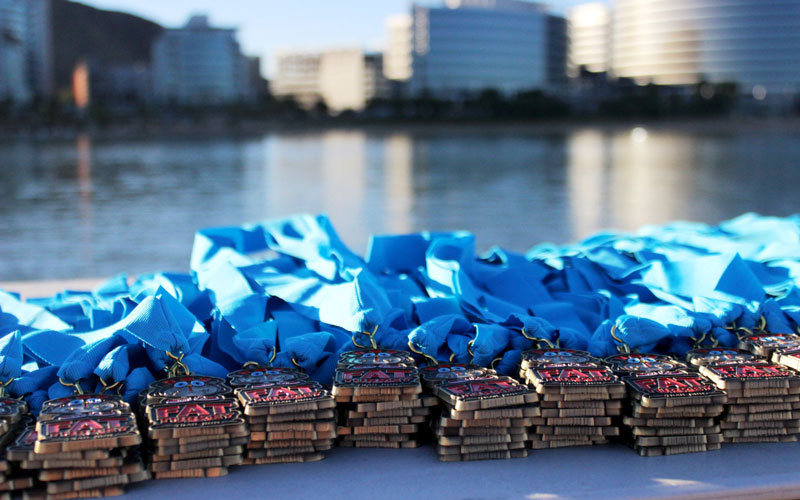 Medals for each finisher of the Fat Turkey Trail Run are displayed in Tempe on Nov. 28, 2015. (Photo by Evan Webeck/Cronkite News)

Edinger, the founder of Pat’s Run, expected about 5,000 people would check in for the race just outside Sun Devil Stadium that morning. But when the pop of the starting gun sounded and 5,500 people started the 4.2-mile run, including hundreds in the shirts Edinger printed “just in case,” he couldn’t help but shed a tear.

“I was trying to hide it the best I could,” Edinger recalled. “Because I still had a bunch of work to do.”

The 4.2-mile run ends on the 42-yard line of Sun Devil Stadium in honor of Pat Tillman, who wore number 42 when he played defense at Arizona State. Tillman turned down a multimillion-dollar contract extension from the Arizona Cardinals in the wake of 9/11 so he could volunteer for the Army. He was later killed in a friendly fire incident during a 2004 tour in Afghanistan. 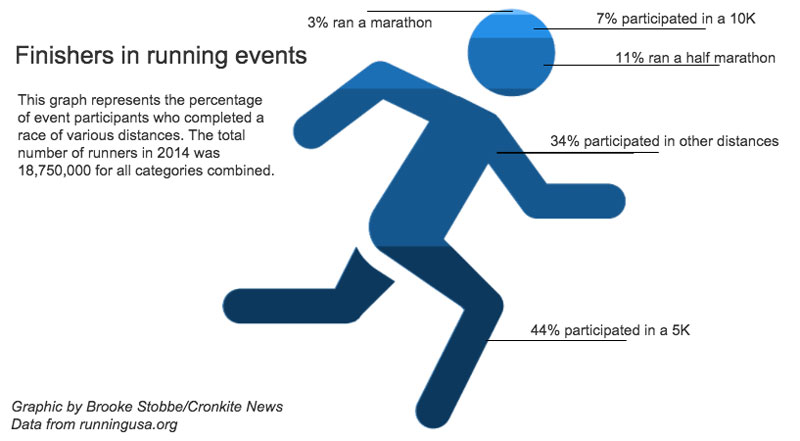 The 500 additional people who turned out for that first Pat’s Run in 2005 were only a sign of things to come. Edinger brushed off one “real numbers geek” friend who suggested there could be 28,000 runners in the future. But less than a decade later, Pat’s Run had to cap its registration at that number due to space restrictions. Each year since 2010, the race has ranked in the top-20 most attended in the U.S.

Edinger’s idea to remember his friend turned out to be at the forefront of a running revolution. Pat’s Run was among the first races to appeal to a larger audience than hard-core runners. Instead, Edinger attracted football fans and those who just wanted to honor Tillman.

Races like Pat’s Run, without the hypercompetitive environment that was prevalent in the 1980s and ‘90s, have fueled running’s explosive growth over the last two decades.

Running events of all lengths have become so successful — attracting 18.8 million runners in 2014 — that the market has become oversaturated, Running USA CEO Rich Harshbarger said. Just in Arizona, there was an average of more than a race a day in 2015 — 414 in total.

Tillman’s number 42 permeates Pat’s Run, with its finish on the 42-yard line and distance of exactly 4.2 miles. Participants, however, aren’t pelted with colored powder and don’t navigate an obstacle course or muddy path like they do in The Color Run, Spartan Race and Mud Runs, which further distance themselves from traditional road races.

The first Spartan Race and Mud Run were held in 2010. In 2011, The Color Run was founded. According to a Running USA study, participation in “non-traditional running events” has soared since, growing from the low six figures in 2009 to more than 4 million finishers four years later.

The year 2010 also marked the first year female marathoners outnumbered males. That trend has only continued, with the percentage of women increasing from one quarter of road race finishers in 1990 to 53 percent in 2010 and 57 percent in 2013.

“Not only do you see the boom of women, you also see a different type of experience offered,” Harshbarger said. “Women, in particular, are running with their girlfriends, their sisters. You start to see people take selfies and posting online.”

To maximize the number of likes on those selfies, it helps to be in costume. It might not be optimal for attaining a personal record time, but the goals of these new runners are closer to personal bonding.

At a recent Turkey Trot — one of 18 Thanksgiving-themed races across Arizona over the holiday weekend — one man was in full turkey costume and many more were in Thanksgiving garb.

“You begin to see a shift toward a social atmosphere, where there’s music and festival and things to do, both for runners after the event and participants during the event,” Harshbarger said. “It took the intimidation factor way down.”

Marathon organizers are banking on a new generation of runners picking up a passion for the sport through their own themed races, such as the Rock ‘N’ Roll Marathon Series, which started in 1998 in San Diego and has since expanded to 30 cities across the globe, including one of its largest races in Phoenix.

“We saw a big uptick in participation (in running) almost at the same time when the economy dipped,” Harshbarger said. “Running is a sport that, really, all you need is time and a pair of shoes. I think that people really got back to basics and were reclaiming their health.”

Now, though, not only is there a wider selection of races than ever, there are also more options for staying healthy — and in a stimulated economy, people are willing to pay for it.

According to a study by the American College of Sports Medicine Health & Fitness Journal, the leading fitness trend in 2016 will be wearable health technology, such as the Fitbit and Apple Watch, prices of which can range upward of a thousand dollars.

With the influx of options for staying healthy — including fun runs, apps, wearable tech and boutique workout studios — traditional road races have had to adapt to stay relevant.

They have found a way to separate themselves: by giving out higher end T-shirts, such as tech shirts, which are more optimal for running than common cotton ones. This, too, can be traced back to Perry Edinger and the original Pat’s Run.

“Back then, everybody was offering T-shirts, so my comment was that we should give them a really nice shirt,” Edinger said. “Now, running stores don’t really sell T-shirts because you get them all at the races. Pat’s Run really started that.”

Shelves are still well stocked with shirts at Runner’s Den, a Phoenix staple for athletes since 1978. But Craig Davidson, who has worked there since 1983, has seen a change in the demographic of its customers.

Davidson, an avid runner himself, has seen generations pass through Runner’s Den.

“I’ll look at a last name and say, ‘Aren’t you someone’s son?’ ” Davidson said. “And they’ll say, ‘No, I’m so-and-so’s grandson.’ That happens occasionally when people come into the store.”

His customers now are older, more likely to be female and more interested in walking shoes than running. According to Running USA, the percentage of full marathon runners who are women has increased from 10 in 1980 to 43 in 2014. During the same period, the average age for marathoners increased six years for men and five for women.

“Running is an aging population,” said Davidson, who is 61 and ran his first of more than 200 marathons in 1978. “We’re seeing a new breed of people who just want to do the color runs and want to do the mud runs. As long as people get active, that’s my focus: Stay active as long as you can.”