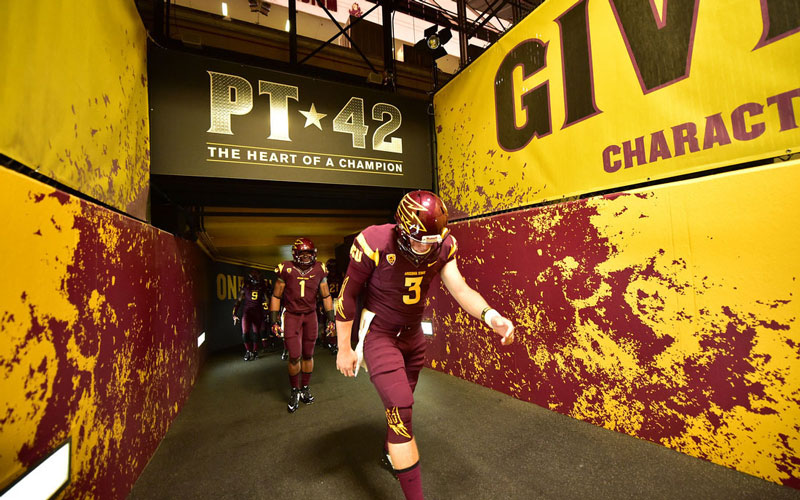 “I definitely enjoy being able to participate in different things,” Woolgare said. “Because swim is more of an individual sport whereas cheer, I have my team. So I think you get both aspects of that. Also, the workout it gives you, too.”

Athletes like Woolgare are becoming increasingly hard to find, as pressure mounts to specialize in a single sport at a young age.

“It’s becoming rare,” said Arizona State women’s basketball coach Charli Turner Thorne. “It’s the pressure from club coaches, and the parents kind of think, ‘Oh, if my kid’s going to get a scholarship, then I’ve got to get them to focus.'”

Jennifer Lannon has had a front row seat for this trend as owner of AZ All-Stars Tumbling and Cheer in Tempe, where Woolgare cheers.

“Nowadays, it’s so competitive and the parent has changed,” Lannon said. “The parent doesn’t drop off anymore. They drop off and they watch and they will put hundreds of thousands of dollars to make sure that their kid is the best. And if they’re not the best, then there’s something wrong. And that’s a whole different avenue.

“People will pay hundreds and thousands of dollars to invest in time for football, soccer, baseball, gymnastics, whatever, and only focus on that sport.”

Turner Thorne said parents who push their children toward one sport are making a mistake.

“I think that kids are much better off, if they can and they want to, play two to three sports,” Turner Thorne said. “We encourage kids, even after they commit to us, (to) play a spring sport, you know, do something else because when you get to college, it’s year-round.

“What it does is it makes you a better athlete,” she said. “If you’re going to volleyball, to basketball, soccer… it’s letting some muscles rest, it’s developing other muscles. Mentally, it keeps them fresher; it keeps it healthier, I think, for them. Really for every reason, it’s fantastic for… young athletes to play multiple sports.”

Research has shown that single-sport athletes tend to be more prone to injury. A Loyola University study found that athletes who specialized were 70 to 93 percent more likely to be injured than children who played multiple sports. According to researchers at Ohio State University, children who specialize in a single sport account for around half of overuse injuries in young athletes.

Coltin Gerhart, now in his second year at Arizona State as a member of both the Sun Devils’ football team and baseball team, is a product of a multisport upbringing.

“Mentally and physically, total different types of sports, baseball and football,” said Gerhart, a safety for the ASU football program and an outfielder for the school’s baseball squad. “I build myself up in football season to go through the baseball season. Mentally, you kind of can just switch back and forth because there’s times when you might be struggling a little bit because baseball is such a mental game and switching over to football and back and forth.”

Gerhart starred in both football and baseball at Vista Murrieta High School in Murrieta, California. He was listed by ESPN as the No. 41 dual-threat quarterback recruit in the country and hit .359 as a senior for the high school’s baseball team with 18 extra-base hits and 26 RBI.

When Seattle Seahawks coach Pete Carroll was recruiting at USC, he said he looked for athletes who, like Gerhart, played more than one sport.

“The first questions I’ll ask about a kid are, ‘What other sports does he play? What does he do? What are his positions? Is he a big hitter in baseball? Is he a pitcher? Does he play hoops?'” Carroll told the website Driven Academy in 2013. “All those things are important to me. I hate that kids don’t play three sports in high school.”

Playing multiple sports is difficult enough, but adding on homework and other school activities can make it even harder.

“You definitely have to be good at managing your time, of course,” Gerhart said. “Even being a single sport athlete, you got to know when to not go have fun and when to do your homework and things like that. I guess it makes time management even more crucial.”

Lannon recalled her time in cheerleading, while also participating in gymnastics, diving, lacrosse and soccer in both high school and college, and said she had no choice but to learn how to balance everything.

“I did three different sports in one day,” Lannon said. “But, I got all my homework done and it gave me [exceptional] time management.”

ASU football’s offensive line coach, Chris Thomsen, who played multiple sports in both high school and college, said the busy lifestyle that comes with being a multisport athlete can also help keep kids out of trouble.

“I think kids have so much energy, whether they’re young or even high-school age kids, you have a lot of energy at that point in your life,” Thomsen said. “To me, to say, ‘Well I’m only going to play football and baseball this year and in basketball season, I’m just going to go home after school,’ that’s when kids get into trouble and get into things they don’t need to be in when they have down time.”

The issue of balance was a key motivator for a 2009 rules change by the Arizona Interscholastic Association. The rule prevents anyone involved in competitive cheerleading from also participating in high school cheerleading. One big reason for that, according to Lannon, was because many of the athletes were not getting their schoolwork done.

While Lannon’s cheerleaders are forced to choose between competitive and high school cheer, they are allowed to take part in other competitive sports, which is something Lannon wholeheartedly supports.

“Being in just one sport, if you played football, if you play soccer, unfortunately nowadays, age 9 or 10 years old, these parents get them into a sport and they burn out quickly,” Lannon said.

“Then they are (pigeon-holed) into that sport only and they never try anything else or experience anything else,” Lannon said. “I think being a multisport athlete is, for me because that’s what I grew up with, I think it just gives you an all-around broad view of everything.”

The cheerleader and swimmer Woolgare sees benefits for those who are single-sport athletes.

“I think advantages of being a single-sport athlete (are) you have more time to focus on that one sport and make yourself that much better,” Woolgare said.

However, she said there is a tremendous benefit to diversification.

“I don’t think you get to experience all the things that you’re capable of and learn what you are good at and what you’re not good at.”