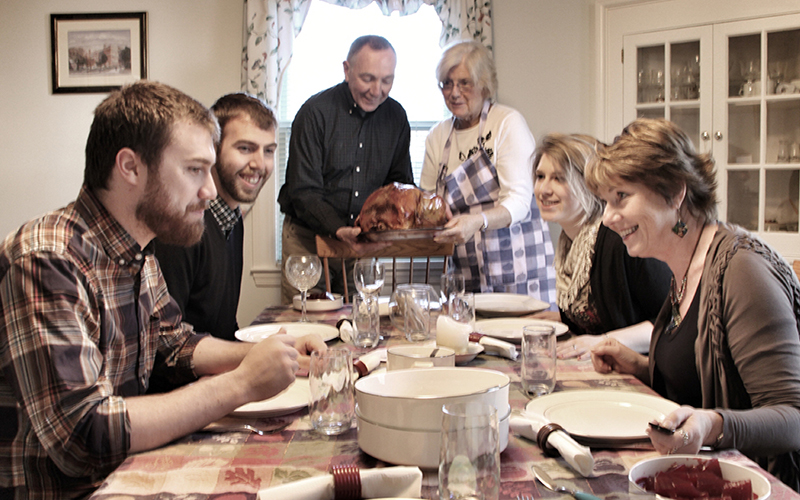 Many Thanksgiving traditions have changed over the years, but even with new wrinkles it remains a holiday focused on family and food, analysts say. (Photo by mgstanton via flickr/Creative Commons)

WASHINGTON – The family activity may have shifted from church-going to shopping, and the food could be Cajun instead of traditional turkey, but for many the spirit of Thanksgiving remains the same as that immortalized by Norman Rockwell in 1943.

“Even though a lot of things have changed so that Thanksgiving doesn’t always look like that (Rockwell painting), it’s still important for people to get home to family for the holiday,” said Forbes, a professor at Morningside College in Iowa. “We still care about family and we still care about homecoming.”

Rockwell’s “Freedom from Want” depicted several generations of a white American family crowded around a formal dining table, where the aproned matriarch is setting a large turkey while the patriarch, in tie and jacket, looks on. (Photo courtesy National Archives)
Norman Rockwell’s 1943 painting, “Freedom from Want,” was one of the pieces in his Four Freedoms series. It has since become synonymous with traditional American Thanksgiving celebration.

A Public Insight Network query for Cronkite News that asked Arizonans how they celebrate the holiday brought responses ranging from Rockwellian to radical.

“My family and I choose a theme every year to switch up the food,” said Elaine Wilson, an Arizona State University student. “This year, it’s a Mardi Gras theme, so they will be having Cajun food.”

For Wilson, choosing a theme for Thanksgiving is as important a tradition as any other. For Arizona resident Michael Kinnaird, this year will be about re-establishing a holiday tradition.

“I have had my traditions broken and the families that I shared them with disowned me,” Kinnaird said in response to the PIN query. But this year, he is looking forward to spending Thanksgiving with his ex-wife and daughter for the first time in three years.

There are other modern holiday traditions that would have been alien to Rockwell.

“Now it’s parades, and football games, and shopping,” Forbes said. “Christmas shopping has even moved into Thanksgiving and kind of overtaken it.”

The National Retail Federation said this month that “133.7 million holiday shoppers were in stores and online” over last Thanksgiving weekend, and that 135.8 million “definitely will or may” shop over the coming weekend.

Jan Allen, a Butterball Turkey Talk-line expert, said the emergence of Thanksgiving as the start of the holiday shopping season has somewhat disrupted the holiday’s family spirit.

Organic local turkeys from Gilbert sell out in a day

Allen also said that with “so many families spread across the country,” some people have started celebrating “a thing called ‘Friendsgiving’.”

Arizona resident Richard Morris told the PIN bureau he will celebrate with friends feasting on “turkeys, ham, and all the trimmings,” but in a less-than-traditional setting.

“Greater Phoenix Mensa annually hosts a regional gathering for Mensans and their guests, which kicks off with a massive Thanksgiving potluck dinner and continues through the weekend,” Morris said. He is chair of this year’s potluck for the group, a “society of bright people” that “welcomes people from every walk of life whose IQ is in the top 2 percent of the population,” according to its website.

But for Arizona resident Diana Brandt, the holiday leans toward Rockwell’s image of it.

She said her family celebrates with traditional Thanksgiving fare – “turkey broken down and cooked in gravy base with onions, stuffing, roasted potatoes, brussels and other veggies … with the whole family, all of us eating together and then spending time together.”

For many, trying to reach that idealized version of the holiday is a tradition in itself.

“The Norman Rockwell idea with the turkey and the stuffing does still exist,” said Daniel Gifford, a scholar of American holidays. “But something always goes awry.”

Gifford, who teaches at George Mason University, said “family dysfunction is the centerpiece” of the modern Thanksgiving, with efforts to create that traditional holiday now the fodder for situation comedies.

“It’s not expected that they’ll actually reach that perfect Norman Rockwell Thanksgiving,” Gifford said. “But everyone still has to go through the ritual of trying.”

And traditional fixings still rule: American farmers will produce 228 million turkeys and 8.41 million barrels of cranberries this year, according to the Department of Agriculture.

But turkeys and cranberry sauce are no longer required for the holiday, which “is really anchored in family and personal experience,” said Jessica Carbone, who works on the Smithsonian Institution’s American Food History Project.

“Thanksgiving has changed from a holiday with political and religious background to a pretty secular and pretty personal holiday,” Carbone said. “The way it’s celebrated has also changed right along with food and our relationship to food.”

What has not changed is that many Americans will continue striving each year to create that perfect Rockwell holiday, Gifford said.

“The traditional trope, whether it’s on sitcoms or in movies, is this attempt to make the ideal Thanksgiving,” he said. “Everyone has that Rockwell picture in their mind when they look around the dinner table.”