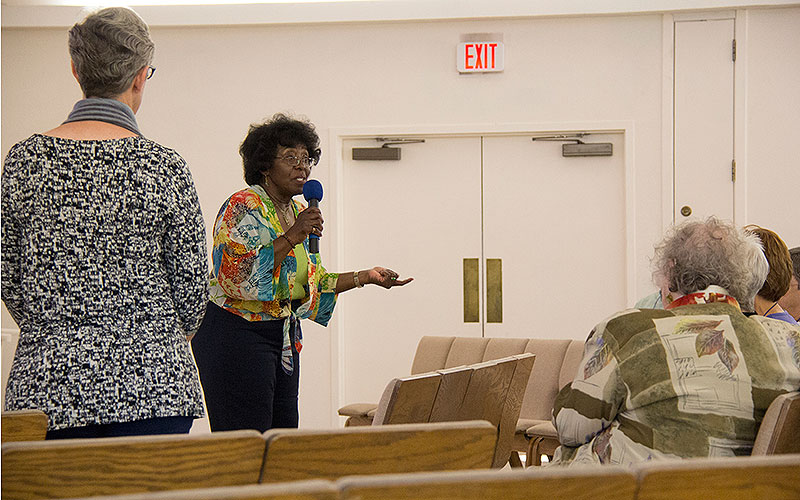 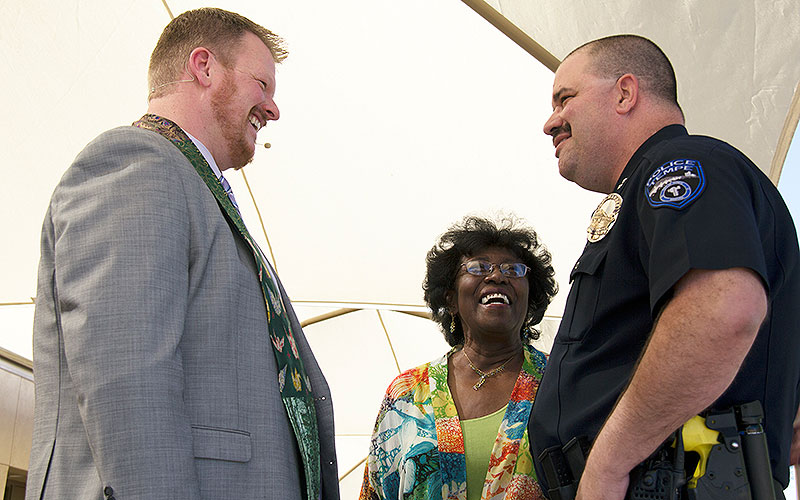 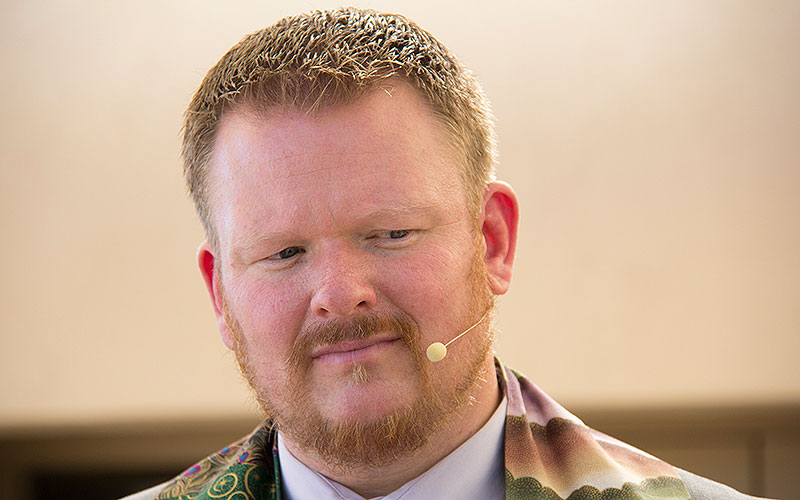 The Rev. Andy Burnette of the Valley Unitarian Universalist Church in Chandler has been moving his congregation to be a leader in the discussion of race and equality.
(Photo by Becca Smouse/Cronkite News) 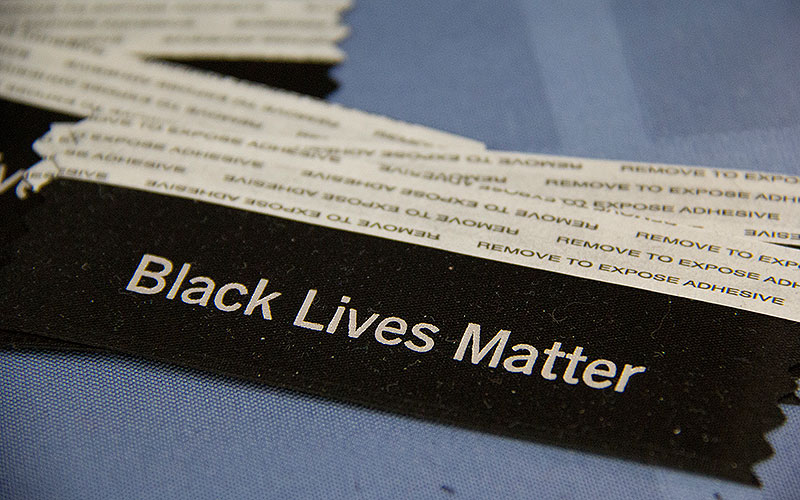 Ribbons with the Black Lives Matter message are given to attendees
at the Valley Unitarian Universalist Church in Chandler.
(Photo by Becca Smouse/Cronkite News)

“(Congregation members) were sad, but not resigned,” said the Rev. Andy Burnette of the Valley Unitarian Universalists. “To see that it’s still controversial to say black lives matter saddened some of those folks.”

A “Black Lives Matter” banner was hung in early November with more than 100 signatures from members of the congregation and the community showing their support, Burnette said. A few days later, the banner and the church were vandalized with signs that read “All Lives Matter.”

A member of the congregation removed the signs to return the banner to its original state. Shortly after, the banner was then spray painted with the word “All” covering the word “Black.”
Burnette said though he was prepared for the vandalism, the crime left the congregation with heavy hearts.

And then the sign was stolen over the weekend of November 20. The banner was cut off of the three poles it hung from in front of the church. The congregation reported the theft to the Chandler Police Department. Stealing property from a church can result in felony charges.

Representatives from Unitarian Universalist congregations around the nation met earlier this year and agreed to support the “Black Lives Matter” movement. Each congregation was encouraged to show their support publicly. Burnette said the Chandler congregation, along with several others around the country, purchased banners to hang on their property.

He said similar resistance has been seen at churches across the nation.

Burnette said the reason the congregation hung the banner in the first place was to signify to the community that the church is safe place to discuss this movement.

“It’s complicated for us because we are a mostly white denomination,” Burnette said. “We look for allies and people to work with and look for people of color in our congregation to lead us in these efforts.”

Beverly McCormick, who is a member of the Unitarian Universalist congregation in Chandler, oversees the Black Lives Matter Program for the church. She is also one of the few African American members of the congregation.

“What I hope to achieve is awareness because, in my heart, I believe the people have good intentions,” McCormick said of the movement. “They are just afraid and fear comes from not knowing.”

Facilitating conversations about African American culture helps break stereotypes and educates the public, McCormick said. She aims to continue these conversations through events she hosts for the church, including a movie series that highlights films with racial injustice themes. A discussion on social injustice and racial inequality follows the film.

“We’ve been so separated because we haven’t had the opportunity to get to know each other and to learn that we are all just human beings walking around in this human being skin, but underneath it all it’s all the same stuff,” McCormick said.

Though the congregation is supporting the Black Lives Matter movement, Burnette said this does not mean individuals of other ethnic background matter less. He said the black community needs public support to help them reach equality.

Donald Harris, president of NAACP Maricopa County Chapter, agrees. He said the movement isn’t to diminish the value of life of other races, a message often misconstrued by the “Black Lives Matter” phrase.

“People are upset because they think we are trying to put a certain group of people, the black community, over and above the white community and the rest of the community,” Harris said. “That’s not true.”

Harris said the goal is to make “another step forward in the fight for civil rights”. He said he also hopes the movement will change the relationship between police and the black community, which has often been characterized by high tension and fear.

Tempe police commander Noah Johnson said he has worked with the church in support of the cause. Johnson was invited to speak to the congregation to discuss the perspective of law enforcement in this movement.

“Here’s the deal: Law enforcement gets seen as this faceless piece of government,” Johnson said. “They don’t realize there is a beating human heart that’s out there doing the job of law enforcement.”

Johnson said the solution to break the stereotype of law enforcement is complex, but one of the first steps is facilitating open communication between law enforcement and the community.

“In these interactions, people can ask questions and it becomes an understanding on both sides,” Johnson said. “That’s the communication piece that is missing.”

Rev. Burnette said a new banner has been printed and will be hung in front of the church soon. He said he and the rest of the congregation hope to continue this conversation across the Valley.

“I hope our congregation can lead that, perhaps in the East Valley, can lead that conversation about making sure that not just in theory and not just in our hearts, but actually in practice and policy that black lives matter,” he said.

McCormick said she was unphased by the vandalized sign. She said this gives the congregation an opportunity to spread their message within the community.

“We are just going to put another banner up and we will keep putting up banners until people finally calm down,” McCormick said.