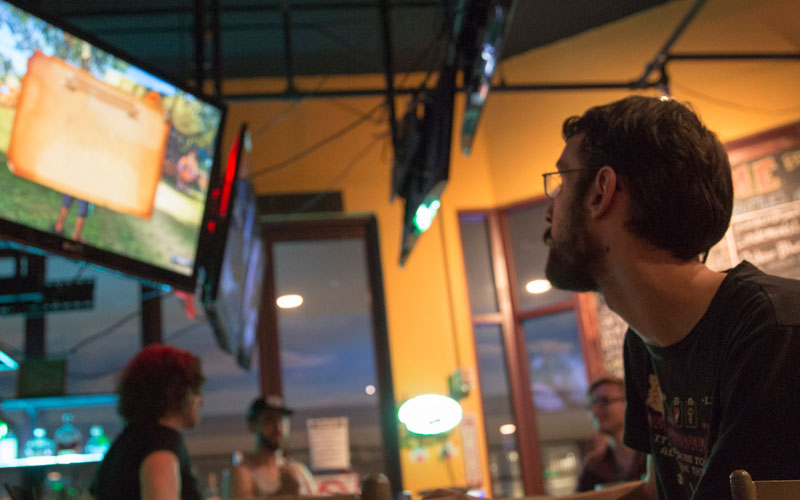 Endgame Bar co-founder and co-owner Ryan Scott plays a video game while seated at one of the several bars inside. (Photo by Jason Axelrod/Cronkite News) 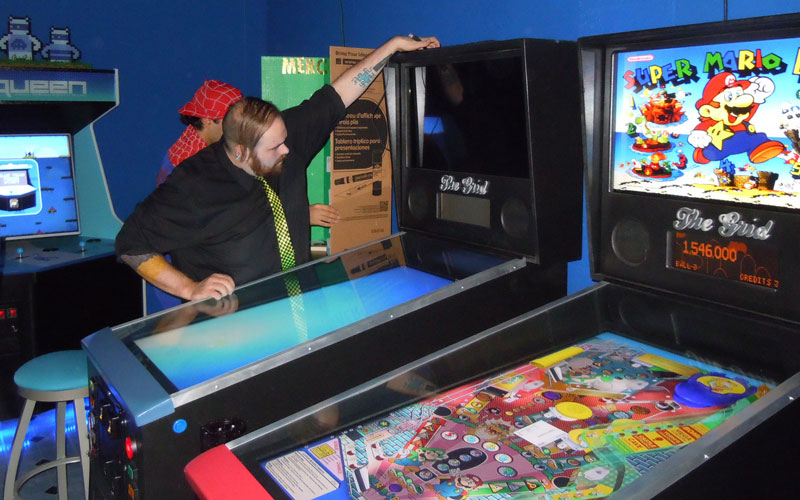 The Grid: Games and Growlers co-founder and co-owner Mike Goosens fixes a pinball machine inside the bar. (Photo by Jason Axelrod/Cronkite News) 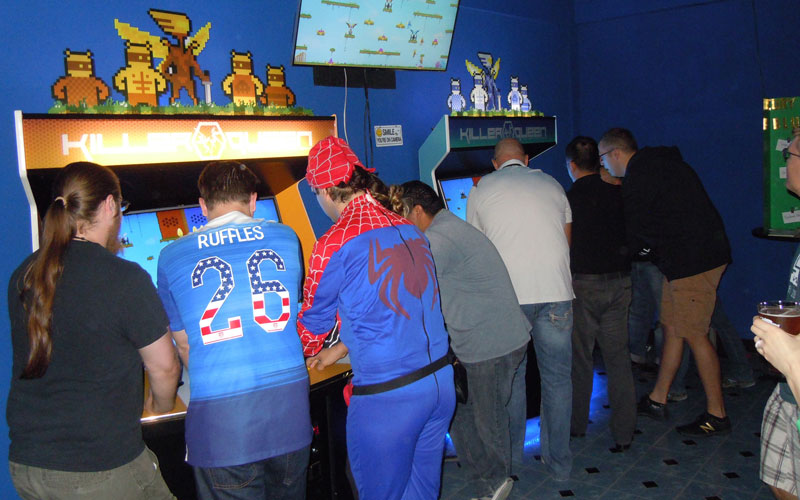 Players take part in a Killer Queen league tournament. The Grid: Games and Growlers is one of only 12 locations nationwide with the 10-person Killer Queen arcade game. (Photo by Jason Axelrod/Cronkite News)

The reason? Endgame’s nearly 700 free games – a mix of arcade machines, home console games and computer-based games – combined with a stocked bar and kitchen make it a paradise for people like Thompson, who’s played video games “almost religiously” since he was 12.

Endgame in Tempe is part of a new crop of arcade bars popping up across the Valley.

The arcade bar concept – a bar filled with video games, often classic arcade machines from the 1980s through the late 1990s – is neither new nor native to Arizona. Barcade, a chain of five bars that opened in New York City in 2004, touts itself as “the original arcade bar.” Other bars, like 1Up in Denver; Headquarters Beercade in Chicago; and Ground Kontrol in Portland, offer similar concepts.

360 video: Optimized for the desktop, laptop and tablet.

“Adults love to play games,” said Nick Bowman, an associate professor of communication studies at West Virginia University who also had his wedding reception in an arcade bar. “They go to the bar to play darts, play pool. They go bowling.”

It’s becoming a trend in the Valley. Endgame opened in October 2014 at 699 S. Mill Ave., while Mesa’s The Grid: Games and Growlers opened in October at 525 S. Gilbert Road. Two more arcade bars, Cobra Arcade Bar and Bonus Round, plan to open in Phoenix this fall and spring.

Bowman credits the rise of arcade bars to a shift in cultural attitudes that has made the toys of Gen Xers cool again. Arcade bars use vintage arcade games to invoke a sense of nostalgia and cater primarily to Gen Xers, generally those born between 1965 and 1984.

“Of course, people who are really into games will go to ‘barcades’ because they have video games,” he said. “But I think that’s what’s cool about the barcade: It’s attracting a generational psychographic and demographic rather than a gamer.”

In the Valley, The Grid and Endgame focus more on gamers, no matter the generation.

Matthew Robbins, co-founder and co-owner of The Grid, said his bar’s target market is all gamers, whether they play electronic games, arcade games, tabletop games like Dungeons & Dragons or card games like Cards Against Humanity. While his bar is for consumers 21 or older, underage people can get in with legal guardians. Robbins said he’s seen families bring children inside.

“We’re trying to provide a really comfortable space for any kind of community, gaming or professional, to be able to hang out, have some space, be able to speak to each other with not over-blaring music, enjoy themselves and express themselves,” he said.

The Grid’s game selection includes a mix of about 13 arcade machines across genres, with pinball and classics as well as racing games with chairs and pedals. The Grid also possesses a 10-player arcade machine called Killer Queen, and the bar is currently one of only 12 establishments where the game can be played, according to the game’s website.

Another area of the bar features risers with chairs facing tables topped with computer screens for playing games. The area has a small stage where musical acts play. The bar’s dim black lighting and sleek neon-lit bar lend it a 1980s, Tron-like vibe.

In contrast, Endgame has some arcade machines, but its selection focuses more on console games with systems as old as the original Nintendo Entertainment System to as recent as the Playstation 4. With its couches in front of consoles, framed wall art and brightly-lit rooms, Endgame evokes an environment familiar to gamers – basements.

“We were here to build community, to bridge the various gaming communities out there and connect them with each other,” he said.

“It’s a nerd hangout for all kinds of geeks,” Scott said. “Whether you’re into board games or card games or anime or magic or whatever, this is a place that’s welcoming. And you’ll be able to meet people that also enjoy those things. And it’s really hard to find that anywhere else.”

He said with stigmas attached to gaming, the bar allows people to be themselves.

“Like I would not go to a sports bar and tell anyone I play World of Warcraft,” Scott said. “But I do, and I can say that (at Endgame), and 10 other people will also do that. And it’s something you can bond over.”

Thompson said the motivation for going to a bar like Endgame is different than going to a traditional bar.

“I feel like most bars, you’ll go drink and you’ll hope to find somebody … to go home with,” he said. “Here, it’s like I want to find someone to play games with and then go home by myself.”

Richard Riley, who said he’d been to The Grid nearly a dozen times the first two weeks after the bar opened, likened the bar’s atmosphere to going to a friend’s house.

The two arcade bars don’t exactly fit what Bowman would consider a traditional “barcade” – a “grungy dive bar with super old games and lots of craft beer” – but customers looking for places more in line with that concept may have other options soon.

Bonus Round will offer only classic arcade games like Asteroids, Mortal Kombat and NFL Blitz.

“We’re focusing on the older games. Really, we don’t want anything newer than 2000,” said Jacob Rendel, co-owner and co-founder of Bonus Round. “We want a lot of the classics. Part of our design scheme and our planning is to make Bonus Round a somewhat nostalgic place.”

Game over: Some bars struggle to keep playing

Although arcade bars have grown, some have encountered glitches.

One Scottsdale arcade bar, The King, opened in August 2014, but it closed shortly after. A new business, Jack’s Place Public House, has been in the space since June. The co-owners of The King could not be reached for comment.

Media reports indicate Cobra Arcade Bar has had to push back its opening.

An article on azcentral.com said the Phoenix bar planned to open in early summer. The bar’s Facebook page said it’s opening in fall 2015.

However, the building at 801 N. Second St. is unfinished and has no arcade machines in sight. The owners of the bar declined to comment. A representative of Cobra Arcade wrote via Facebook message, “the owners feel they want to stay away from any hard press until we have a definite opening date.”

Endgame’s Scott said his bar was close to folding this summer, blaming the Arizona heat for driving customers away.

Endgame must bring in $60,000 in revenue per month to break even, he said. During the summer months, the bar brought in about $45,000 per month.

“We’d have good weekends (in) the summer, but our weekdays, it wasn’t even worth it to be open,” Scott said.

But making money isn’t the most important thing to Scott.

“Part of the reason we’re here is not for me to make a killing, it’s for me to provide a service that’s both affordable and encouraging to people to continue to come here as often as possible,” Scott said. “I want to build large communities of gamers.”

Robbins said that about 75 percent of The Grid’s revenue comes from alcohol sales, while about 25 percent comes from food. When the bar books musical acts, it doesn’t always make money off the ticket sales.

“We’re not trying to gouge anybody, that’s for sure,” he said. “I just want to make rent and pay for my kids’ medical expenses.”