The University of Phoenix Stadium will play host to the College Football Playoff championship game on Monday, Jan. 11 in Glendale, Arizona.
(Photo via Wikimedia Creative Commons) 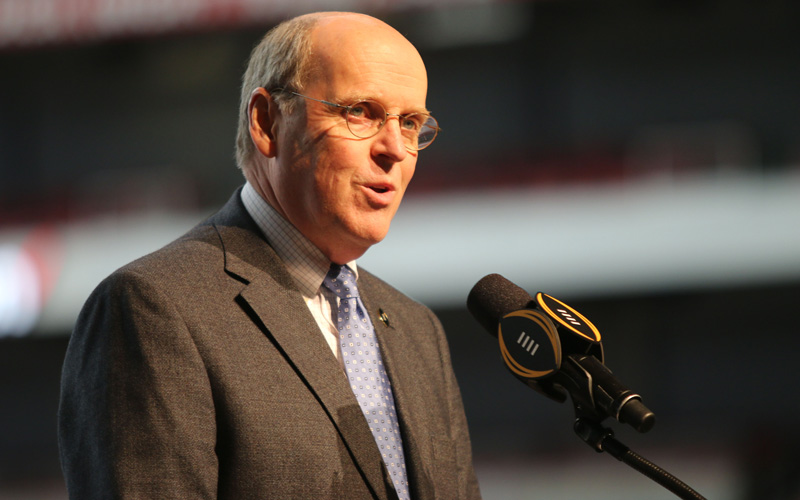 Bill Hancock, the executive director of the College Football Playoff, announces the talent that will be headlining the events leading up to the championship game on Jan. 11.
(Photo by Kris Vossmer/Cronkite News) 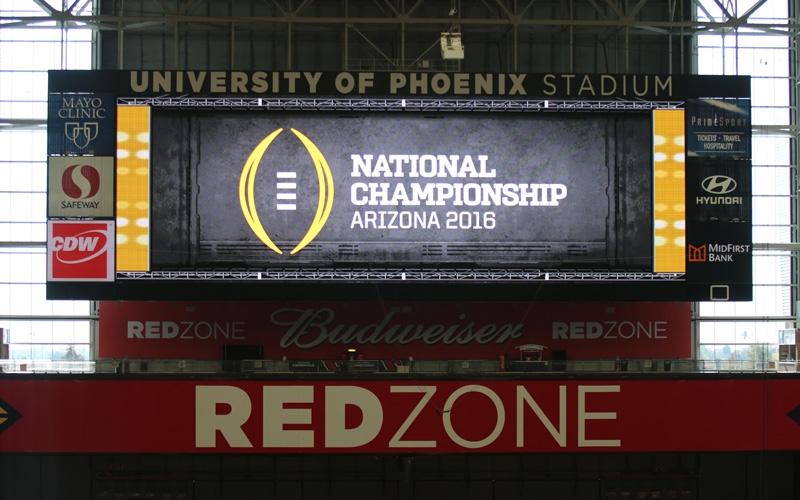 The College Football Playoff National Championship game logo is shown on the scoreboard at University of Phoenix Stadium. The venue will host the game on Jan. 11.
(Photo by Kris Vossmer/Cronkite News) 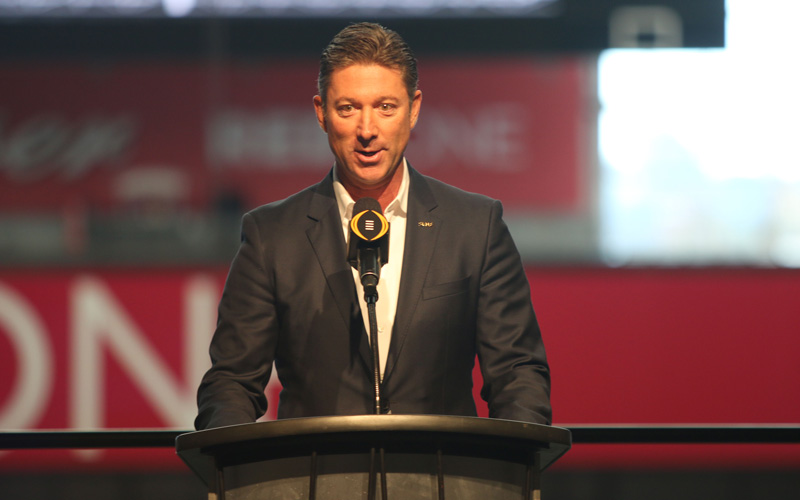 Brad Wright, co-chair of the Arizona Organizing Committee, is looking forward to January. “We’re on the clock and this is going to be a four-day celebration of college football with something for everybody,” Wright said.
(Photo by Kris Vossmer/Cronkite News)

At a news conference Wednesday, game organizers announced details for a slew of entertainment options beyond the game itself, including the musical performances, games, exhibits, tailgates and other activities.

“We’ve seen a lot of great college football events here but we haven’t seen anything like what is coming here in 54 more days,” said Bill Hancock, the College Football Playoff executive director.

Fans will also have the opportunity to watch media day interviews with student-athletes and coaches from a 50-yard football field on Jan. 9 as part of the Playoff Fan Central activities.

Much like last year’s inaugural College Football Playoff National Championship game in Texas, those with a ticket to the game will also have access to Championship Tailgate outside of the stadium on game day. The tailgate will include musical performances, interactive games, broadcast sets and other activities.

“As an organizing committee, we visited Dallas last (season) and we saw what an incredible event it was,” said Arizona Organizing Committee co-chair Brad Wright. “We’re excited to be a part of it and we’re committed to making it an even better event this year here in Arizona. We’re on the clock and this is going to be a four-day celebration of college football with something for everybody.”

The College Football Playoff Foundation’s philanthropic initiative this year will honor teachers through a variety of activities, including a 5K run/walk and a teacher’s summit.

“We encourage all the community to come out and experience this,” Wright said. “Bring your family, bring your friends and be part of this great experience over the game weekend.

“As you might imagine, with all the activity and all the excitement around this event, we can’t do it alone. As a community organization, as an organizing committee, we need the community. The community has stepped up – businesses, sponsors, volunteers – that’s what makes this happen. That’s what makes us a world-class destination.”

Though the championship and playoff matchups have yet to be determined, the College Football Playoff Selection Committee revealed its latest rankings Tuesday with Clemson, Alabama, Ohio State and Notre Dame still occupying the top four spots in the rankings.

The final rankings and bowl matchups are scheduled to be released Dec. 6.