Banners show the 2017 Final Four logo that was unveiled at Harmon Park in Phoenix Tuesday. 2017 will be the first time the Valley hosts the NCAA men’s basketball event.
(Photo by Bill Slane/Cronkite News) 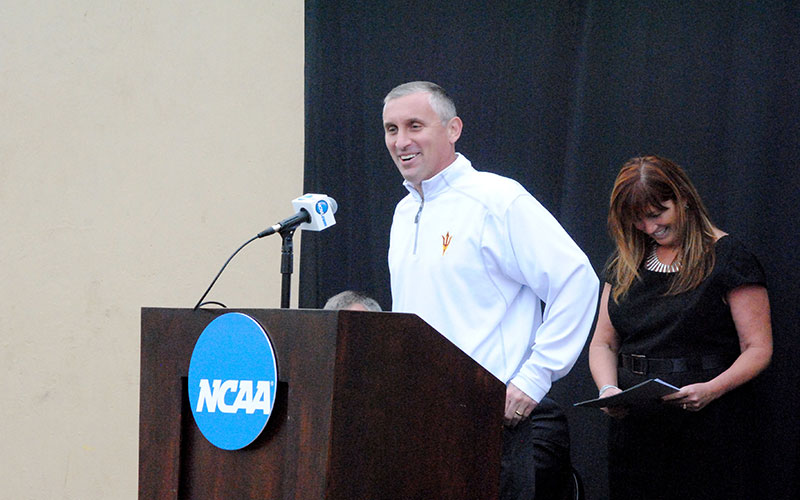 ASU head basketball coach Bobby Hurley speaks at a press conference before the NCAA unveils the logo for the 2017 Final Four. The event will be played at University of Phoenix Stadium in Glendale and ASU is the host institution. (Photo by Bill Slane/Cronkite News)

On Tuesday the logo for the first Final Four in the western U.S. since 1995 was unveiled at Harmon Park, just south of downtown Phoenix. The park is the site of a new NCAA Legacy Restorations project, where the NCAA will work to improve some of the basketball facilities at the park.

“This park is legendary in Phoenix basketball circles,” Mayor Greg Stanton said. “That makes it the perfect choice for what we are doing here today.”

The park is overseen by former NBA player Steve Colter, now a recreation coordinator for the Phoenix Parks & Recreation Department. Colter, an Arizona native and graduate of Phoenix Union High School, is one of myriad professional players who have used the Harmon Park court, which is now named after Steve Colter’s father, Andrew.

“This park has been a hotbed for college and pro players looking for pickup competition,” Stanton said. “It was used as a training facility for the Harlem Globetrotters for a number of years.”

James “BB” Fontenet, who was drafted by the Chicago Bulls, Rudy White, who played for three different teams in the NBA after his career at Arizona State, and Fred Carr, a member of the Green Bay Packers Hall of Fame, are some of the more well-known Arizona natives who made use of the courts at Harmon Park in their youth. And then there was the player considered by many as the best of all time.

“There’s been legendary players who have passed through here, including Michael Jordan who has sat in this gym,” Colter said.

The park, located on Fifth Avenue and Buckeye, continues to serve many purposes for the neighborhood with the different youth programs it hosts, such as organized basketball leagues, karate, homework help for students and a federal meals program.

“This park, this community center, is a rock in south Phoenix,” Stanton said. “This park has been a cornerstone of our community since 1927 and we’re going to keep it that way.”

Colter says the kids who use the facilities at Harmon now have it better than when he was their age, but the restorations are still a welcome addition.

“This is an impoverished area,” Colter said. “So when we do something like that here, at an inner city park, it gives those children who are from the inner city more of an impetus to say ‘You know what, if that guy made it and he came from this situation, I’m sure I can make it as well.’ ”

Before the Super Bowl in February, the Arizona Super Bowl Host Committee projected that the economic impact of the event would bring an estimated $500 million to the state. The Final Four will be the third time in as many years Arizona hosts a major sports championship.

“The 2017 Final Four is going to boost our local economy, but I’m just as excited to see the lasting impact it will have on this neighborhood and the surrounding community,” Stanton said.

Mark Hollis, the athletic director at Michigan State University and the chairman of the 2016-17 NCAA Division I Men’s Basketball Committee, is not a stranger to Phoenix and says he’s not surprised that a variety of sporting events choose the Valley as a location. Hollis has been to Phoenix with Michigan State as recently as 2012, when the Spartans played in the Buffalo Wild Wings Bowl in Sun Devil Stadium.

“This community and the hospitality it provides is one of the reasons why the committee looked at all of the different proposals and chose the Phoenix-Glendale area as the site where we wanted to have a Final Four,” Hollis said.