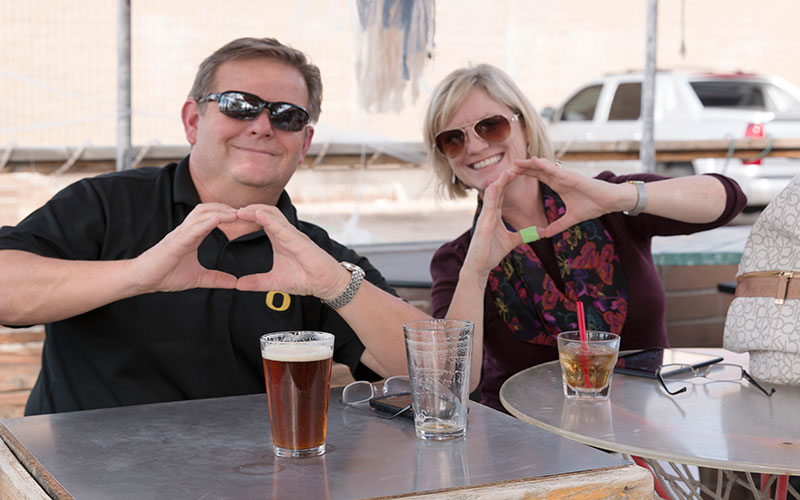 John and Jill Wolff, visiting from Portland, Oregon, heard that the Well Bar in Scottsdale was the best place to meet other Ducks fans. (Photo by Antonio Cannavaro/Cronkite News) 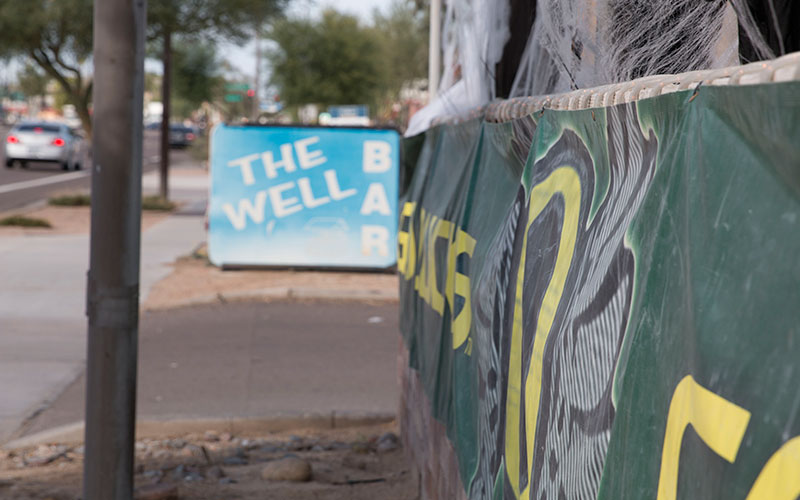 Since 2006, the Well Bar on Scottsdale Road has been the home for all things Oregon in Arizona.
(Photo by Antonio Cannavaro/ Cronkite News) 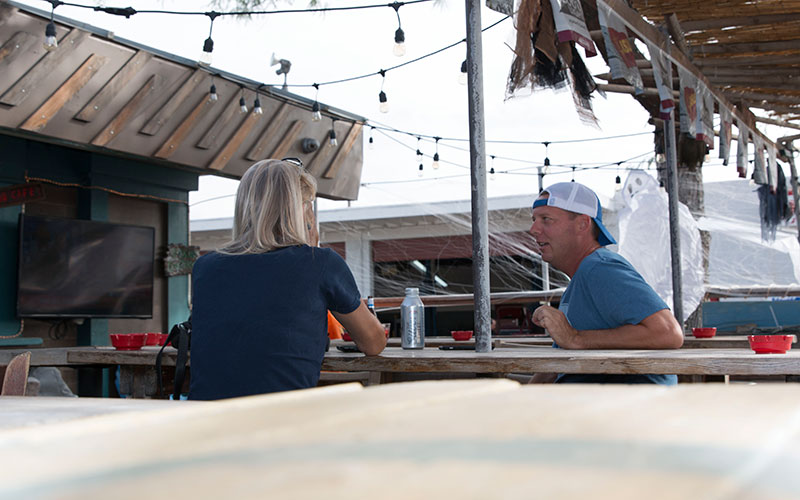 John Marston, owner of the Well Bar in Scottsdale, brought Oregon to Arizona when he opened the bar in 2006.
(Photo by Antonio Cannavaro/Cronkite News)

“We are the Autzen in the desert,” said John Marston, owner of the Well Bar, comparing his establishment to Oregon’s home field in Eugene, Oregon, Autzen Stadium.

Marston was born in Eugene, went to high school in Eugene and attended the University of Oregon. Despite these strong connections to Eugene, he moved to Scottsdale, to get away from the gloomy Oregon weather.

“I came out here trying to get out of the rain,” Marston said. “(I) bought a bar right next to Sun Devil country and it is so much fun; Made an Oregon bar, which is great because there are so much Oregon people that come to the desert.”

Brian Crisp, a relocated Oregonian who has been living in the desert since 1993, watches as many Oregon games as he can at the Well Bar.

“I love it here,” Crisp said. “It is like a mini-Autzen Stadium in the desert. Great place for Duck fans to come together, watch games, meet new friends.”

On a typical Oregon game day, Marston says the bar brings in between 100 and 120 Ducks fans.

Ducks fans that have relocated to the desert are not the only Oregon fans that frequent the Well Bar. The bar is also a destination spot for many Ducks fans that visit Arizona.

Harry Adamo, a Springfield, Oregon, native in town for today’s UO-ASU game, always makes sure to visit the bar anytime he and his wife are in Arizona.

“I have been here every time I come to Scottsdale – see a lot of fans for the Ducks, enjoy the atmosphere, and meeting up with (all) the Duck fans,” Adamo said. “ I think it is a spot that all Duck fans should come to.”

Adamo expects plenty of Ducks fans to be there later today.

“It is going to be very familiar on game day for many Ducks fans,” Adamo said. “I know already a half of a dozen buddies of mine are going to be here for the game and coming here for the pregame.”

Portland, Oregon, residents John and Jill Wolff, also visiting Arizona for the game, heard that the Well Bar was a must stop for Ducks fans.

“We have been down here before and we heard that there was a Duck bar here in Scottsdale. We wanted to hang out with other Duck fans to get ready for the game,” John said.

Marston said word about his bar has gotten around in Oregon.

“More people know about us in Oregon than they do in Arizona,” Marston said.

Many Ducks fans enjoy coming to the Well Bar because the owner was born and raised in the Beaver State.

“It is owned and operated by a fellow Oregonian. (Marston) knows a lot of Duck fans around here. I found (the bar) from other friends that come here,” Crisp said.

With the game today, Marston expects a large crowd of fans at his bar.