Spurred by rising reports of encounters between drones and other aircraft, federal transportation and aviation officials want to require drone registration. (Photo by Don McCullough via flickr/Creative Commons) 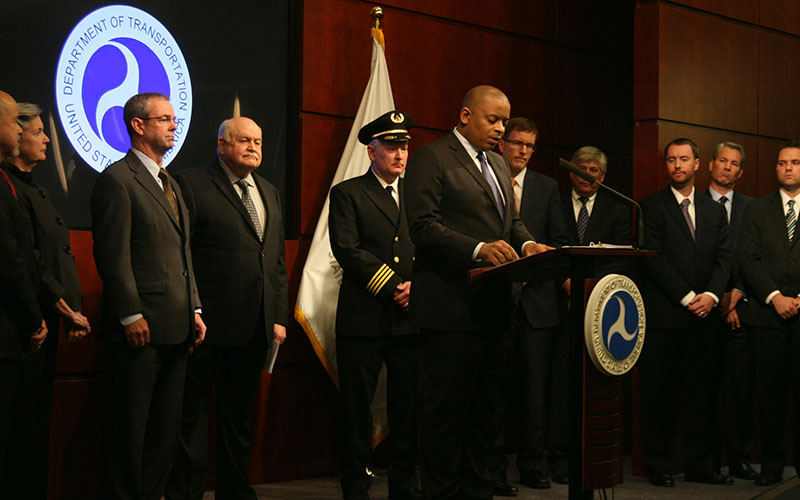 Transportation Secretary Anthony Foxx, backed by government and industry officials, talks about how a proposed government system for registering drones could be enforced. (Photo by Tom Blanton/Cronkite News) 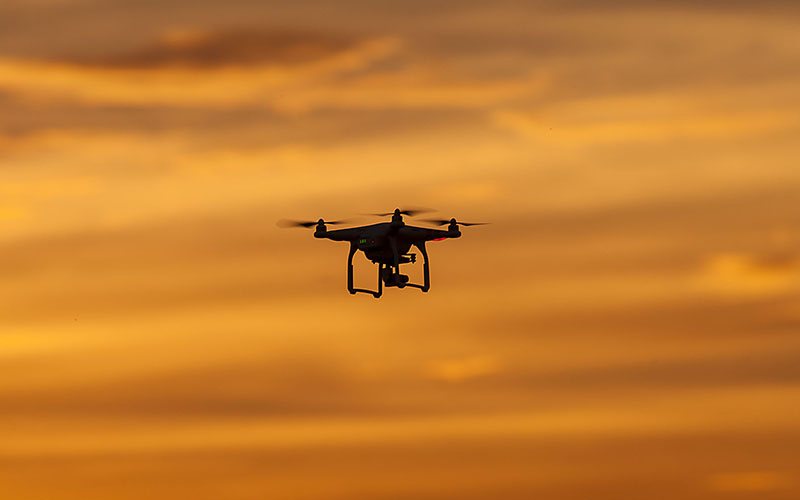 The Federal Aviation Administration got 764 reports of encounters between drones and other aircraft from November to August, with 23 of those in Arizona. (Photo by Greg Clarke via flickr/Creative Commons)

WASHINGTON – The federal government moved one step closer Monday to requiring registration of drones, unveiling a public-private task force that has a month to develop recommendations for a drone registration process.

The announcement comes amid growing reports of encounters between drones and other aircraft, with the Federal Aviation Administration reporting 764 such incidents – 23 of them in Arizona – from November to August.

“We are certainly seeing an increase in the number of reports,” said FAA Administrator Michael Huerta at a Monday event to announce the task force. “This industry is taking off.”

Huerta said the number of potentially dangerous drone operations reported to his agency more than doubled from 2014 to 2015.

Of those incidents cited by the FAA in August, roughly half came from four states: California, Florida, New York and Texas.

Arizona was ninth-highest with 23 incidents, which included one report of a close call involving an American Airlines flight descending toward Sky Harbor International Airport in August. Twenty-two of the incidents in Arizona were reported between February and August 2015.

In releasing the reported incidents, the FAA said it was trying to “send a clear message that operating drones around airplanes and helicopters is dangerous and illegal,” and that violators could face fines and jail time.

But officials at Monday’s event noted that even when such close encounters are reported, tracking down the person piloting the unmanned aircraft can be difficult – which is why registration is needed.

“Finding the drone has not been as much of a problem as finding the person controlling the drone,” said Transportation Secretary Anthony Foxx, who announced the task force with Huerta.

“We have to go through a lot of steps to identify who, in fact, is using a drone,” said Foxx. “Registration will allow us to identify them (more easily).”

The task force will be comprised of 25 to 30 representatives from the unmanned and manned aviation industries, the federal government and other stakeholders, according to a Transportation Department press release.

Representatives from eight such groups were on hand Monday, including associations of airline pilots, drone enthusiasts and consumer electronics professionals, among others.

An official with the Association of Unmanned Vehicle Systems International said his group supports the registration effort, but urged the government to finalize rules first on operation of small unmanned aerial systems.

“Under the FAA’s proposed small UAS rules released earlier this year, commercial operators would be required to register their platform,” said Brian Wynne, president and CEO of the association.

Wynne, speaking at Monday’s event, said it is “essential for the FAA to finalize” those proposed rules quickly so that “we will have an established framework for UAS operations.”

“Considering that safety is at stake, time is of the essence to finalize the rules,” Wynne said.

The task force will have until Nov. 20 to report back with its recommendations. Those will include which drones with low-safety risks should be exempt from required registration, and which registration process would be the least burdensome for commercial drone operators. The group can also submit other recommendations as it deems them necessary.

Foxx and Huerta said their agencies hope to have a registration system operational as early as December.

A Valley man who runs a drone business doesn’t think much of the FAA’s drone registration plan. Cronkite News’ Mitch Quesada has the story.