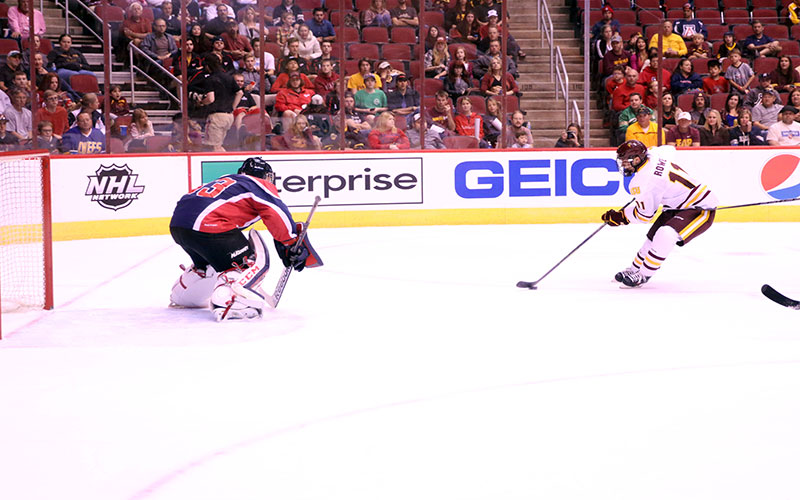 Arizona State’s Jack Rowe attacks the net in Sun Devils’ game against University of Arizona Saturday.
The Sun Devils made a big statement with their 8-1 win.
(Photo by Zuriel Loving / Cronkite News) 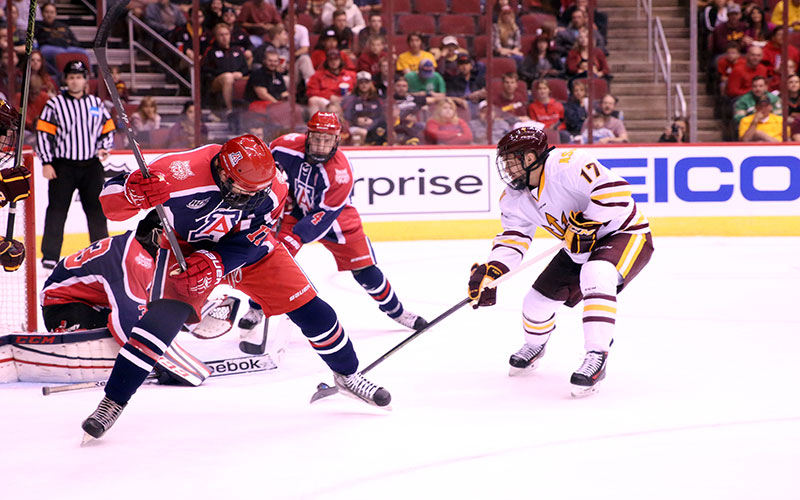 Jordan Masters (17) was proud of how the Sun Devils performed in their first game as an NCAA Division I program. “I think the team came together as best as possible and did all the little things we could tonight,” Masters said.
(Photo by Zuriel Loving / Cronkite News)

“It really hasn’t set in yet,” said Schmidt, who last scored an NCAA goal while playing at Ferris State University in 2012. “I’m starting to think about it and it’s an honor. It’s something I can tell my grandkids.”

While the 8-1 win over the University of Arizona, which plays club hockey in the American Collegiate Hockey Association, was not surprising, the players were surprised at the size and energy of the crowd at Gila River Arena.

“The boys didn’t know what to expect,” Schmidt said. “We walked out of the tunnel and there was already a ton of the crowd there for warmups and we were like, ‘Oh… this is gonna be sweet.’ Then we walked out for the national anthem and you got chills down your spine.”

“I think it was unbelievable,” Masters said. “I don’t think I’ve ever played in that big of an atmosphere.”

This was the first NCAA hockey game in Arizona since 1985 when Northern Arizona University had a team, and it was the first collegiate hockey game to be played at Gila River Arena. As a former club player at ASU, head coach Greg Powers had hoped that ASU would eventually make the move to the NCAA Division I level.

“It’s a dream come true, it really is,” Powers said. “I never predicted it, never thought it would happen. I’d always hoped it would happen and I’m just honored to be a part of it.”

With rumors swirling last year about the team possibly making the jump, fans were excited about the thought of hockey growing in the state of Arizona. This included Jim St. Leger, who was in attendance Saturday with his 13-year-old son, Schuyler.

“I think it‘s fantastic,” St. Leger said. “It’s really exciting to see kids in the area growing up and playing hockey. ASU and hockey don’t seem like they go together, but it’ll be interesting to watch and see how it grows and matures.”

While there was no love lost between ASU and Arizona on the ice, Powers believes that this experience could be a stepping stone for the Wildcats.

“I think this is great for hockey in Arizona,” Powers said. “Hopefully one day, they decide to do what we’ve done in Tucson. I would be such a huge advocate of that.”

Having two NCAA teams in Arizona would do wonders for the growth of hockey in the state. It would also be good for the rivalry, because, as of now, it will be coming to an end on the ice after the two schools face off in Tucson on Feb. 19.

“I don’t like them so far,” Masters said. “I think we play them one more time this year so it should be a good battle.”

“I’m an (alumnus) and I really cherish this rivalry,” Powers said. “It’s always been a highlight and pinnacle of my season, as a coach and player, playing U of A.”

While Arizona and the ACHA are in the rearview mirror, the team is looking forward to the rest of its season and going up against NCAA teams. Arizona State also plays five more games at Gila River Arena, including games against Yale and the U.S. National 18U Team. The Sun Devils hope the crowd, which topped 5,000 on Saturday, is even bigger when they return to the Coyotes’ home ice in January.

“The goal is to double what we had today,” Powers said. “We want to continue to have success, invigorate our fan base and make them proud so that the time Jan. 8 rolls around, the crowd will be doubled.”