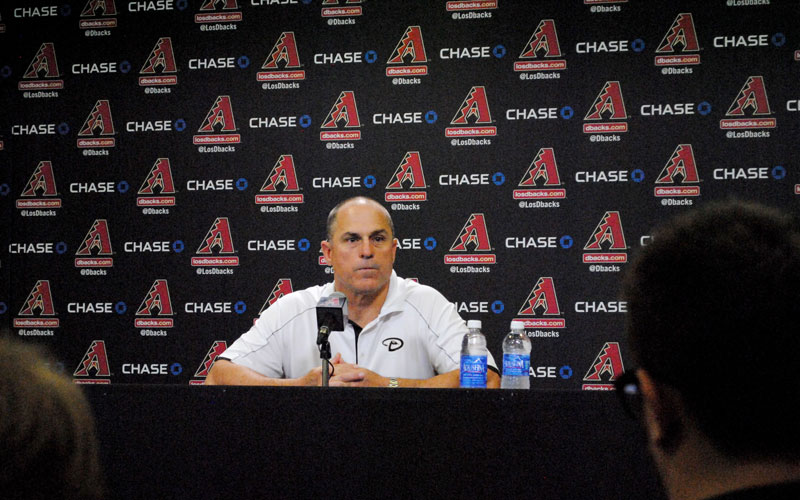 Diamondbacks manager Chip Hale speaks with media members the day after his team’s final game of the 2015 season. (Photo by Bill Slane/Cronkite News)

The team’s leadership says that will be different in 2016.

On the first day of the Diamondbacks’ offseason, general manager Dave Stewart was already talking about some of the deficiencies the team dealt with in 2015 and how the organization can work on those next year.

“I think a lot of our problems came from the fact that we couldn’t get our starting pitchers deep into games and we were running our bullpen out there every day,” Stewart said.

The Diamondbacks took an immediate step Monday with an eye on improving their pitching when they let Mike Harkey go after two seasons as the team’s pitching coach, a move that manager Chip Hale called “the most difficult thing I’ve ever been through.” The team ended the season with an ERA of 4.04, good for just ninth in the National League, so Hale agreed that a change had to be made.

“He’s a great guy – great heart, helped me a lot.” he said. “But when one part of your team struggles a little bit a lot of times you have to make changes, and we felt like a new voice in that spot was needed.”

One of the bright spots for the team’s pitching staff in 2015 came out of the bullpen in closer Brad Ziegler, who some thought might not even be on the team out of spring training.

“Probably the best thing for us was he wasn’t healthy enough in spring training for teams to say, ‘Hey we really want him,’ because without him we would not have done what we’ve done,” Hale said.

Ziegler was recovering from microfracture surgery on his left knee during spring training and wasn’t the team’s closer on opening day. He didn’t record his first save until May 21 but ended the 2015 season with 30 saves, putting him in the top 10 for the National League this year and sixth all-time for the Diamondbacks.

“He’s unconventional as a closer, but he was so good and great with the bullpen,” Hale said. “For me, that was the biggest surprise, because I didn’t even know if he was going to be with us when we left spring training.”

One day after finishing the regular season, neither Stewart nor Tony La Russa, the team’s chief baseball officer, discussed positions they will be seeking to improve during the offseason, but they said they are confident they can get what they need to contend for a playoff spot next year.

Many baseball fans, with the possible exception of those who root for the Dodgers and Yankees, the teams with the two biggest payrolls this season, often lament the fact that their teams don’t spend enough to win.

The Diamondbacks had the third-smallest payroll in MLB this season with about $76 million, but La Russa said throwing around big money isn’t always the best move.

“One of the things that you see just in the recent past with teams that are playing in October is not necessarily how deep their pocket is,” La Russa said. “A lot of it is scouting and developing and how they are coaching and managing in the big league level. We feel out scouting and development is right there with anybody.”

La Russa said the Diamondbacks will have plenty of money to work with this offseason.

“Whatever that number is, it will be enough for us to put together a team that makes a lot of progress towards contending and playing in October,” he said.