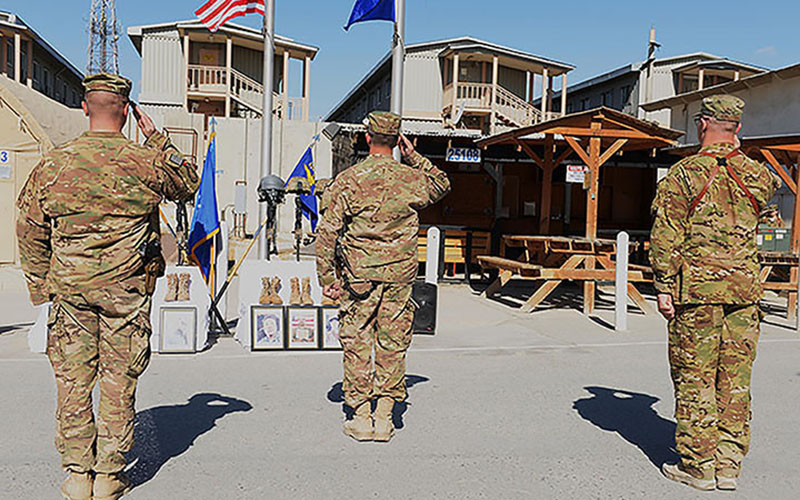 Airmen at Bagram Airfield in Afghanistan take part in a service for the six servicemen who died in a Friday crash at Jalalabad Airbase that also took the lives of five civilians, including one from Arizona. (Photo by Senior Airman Cierra Presentado/USAF)

WASHINGTON – A Tombstone native was identified Monday as one of five civilians who died, along with six military personnel, in the crash of a cargo plane shortly after takeoff Friday from an airfield in Afghanistan.

Carlos Carrasco was working as a contractor for Northrup Grumman when he was killed in the crash of a C-130J at Jalalabad Airfield.

An Air Force statement released shortly after the crash said that enemy fire was not suspected as a factor, but that the crash was still under investigation.

Carrasco worked for Northrup Grumman in Sierra Vista and was serving in Afghanistan as an unmanned aerial vehicle mechanic and technician, according to a statement from the office of Rep. Martha McSally, R-Tucson, who extended her “heartfelt condolences” to his loved ones.

“Carlos died while serving alongside his peers to make all of us here at home safer, and our country and community are grateful for his brave service as we mourn his tragic loss,” McSally’s statement said.

In a statement on the crash Friday, Defense Secretary Ash Carter said it is “a reminder of the risks that our men and women face serving their country in remote parts of the world.”

McSally’s office said Carrasco was raised in Tombstone and graduated from Tombstone High School in 2006, before earning degrees in avionics and UAV technology from Cochise College.

Calls seeking comment from Tombstone High School and Northrup Grumman were not immediately returned Monday. Officials at Cochise College said they only learned Monday of the death of Carrasco, who was a 2012 graduate.

“Like many of our students, he chose to serve his country,” said Robyn Martin, a Cochise College spokeswoman. “The college community’s heart is with his family and friends, as well as with all those who are affected by this situation.”

McSally said she visited the Jalalabad Airfield in May “and witnessed first-hand the critical work they were doing for our national security.”