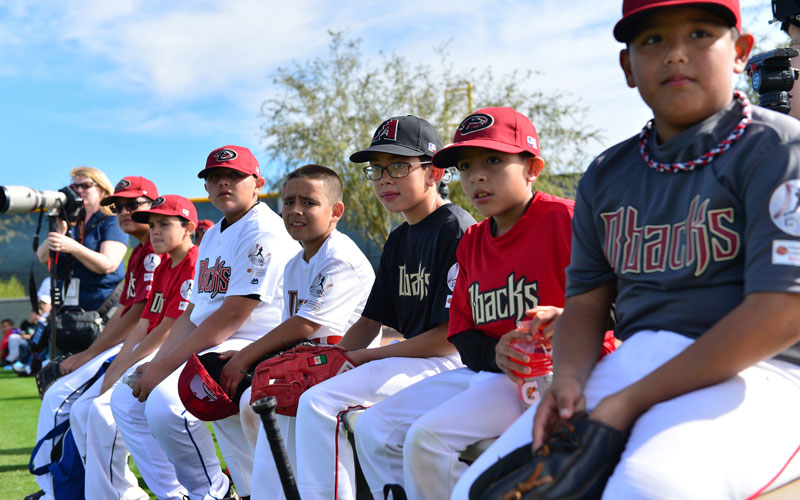 The league’s young players have benefited greatly from the Diamondbacks’ Jersey Give Back Program, in which the organization provides high-quality jerseys to leagues around the state. But there has been a greater impact from receiving these jerseys than the kids being able to dress like their favorite players.

“Getting that help from the D-Backs, it helped (families) on their own houses and in their own households, which had a big impact on the community,” Cactus Youth Baseball League president Luis Tolano said.

The Diamondbacks began the program two years ago with an eye on alleviating what can be a burden for some families.

“A uniform for a Little Leaguer can sometimes cost you up to $40 or $50. If you have two or three kids in the family, that can be a significant impact on a family, especially if they’re trying to make ends meet,” Diamondbacks Manager of Hispanic and Emerging Markets Jerry Romo said. “We’re going to be supporting more than 45,000 kids and about 60 leagues total.”

Of the 500 kids in the Cactus Youth Baseball League, Tolano said 98 percent are Hispanic. The Diamondbacks put a heavy emphasis on Hispanic outreach in a market that has a large Latino population. As of 2014, roughly 30 percent of the population in Arizona was Hispanic or Latino, according to the Census Bureau.

As part of the franchise’s work to cultivate a strong connection with the local Latino community, Romo developed a Spanish slogan for the team, “Somos Hispanos. Somos D-Backs,” which translates to, “We are Hispanic. We are D-Backs.”

“With the team being here in Phoenix, and the amount of the Latino fan base that come and really follow the Diamondbacks, it was important for us to be able to create something that would resonate with Hispanic culture,” Romo said. “We wanted to give them a sense of identity, where people can come out here and say, ‘Yes we are Diamondbacks fans, but it’s more than just that. This is our team, this is who we support, this is who we identify with.'”

The Diamondbacks’ efforts to engage Hispanics in the area have had an impact on Tolano.

“We feel like we got ‘em, you know, Los D-Backs. They are there for us and that’s lovely,” Tolano said.

Diamondbacks legend and Special Assistant to the President and CEO Luis Gonzalez recognizes that reaching out and connecting with Hispanics is important and that it is a chance to grow the Diamondbacks fan base.

“These kids are our future leaders and it takes a lot of stress off their parents because of the simple fact that they’re getting the uniforms for free,” Gonzalez said. “It gets our brand out there. I think that’s what’s important to us is to give back, number one, in the community and number two is to try to make these young kids Diamondbacks fans so when they’re older and their kids grow up, from generation to generation, you want to try to make them Arizona Diamondbacks.”

As part of Hispanic Heritage Month, the D-Backs will present Hispanic Heritage Night at Chase Field Saturday against the Houston Astros. In addition to the game, the Diamondbacks will hold a free street festival outside the stadium from 2 p.m. to 5 p.m. There will be live music, face painting and food trucks, among other activities.

Arizona native and Mexican pop star Luis Coronel will perform in a post-game concert. Coronel, 19, grew up a fan of the Diamondbacks

“The fact that he’s from Arizona and he’s got this massive following and loves the D-Backs, it’s the perfect fit for us,” Romo said. “It’s our biggest event by far when you look at the Hispanic market. So that’s where we pull out all the stops. It’s a big celebration. It’s baseball, food, music and all that great stuff so we’re excited.”