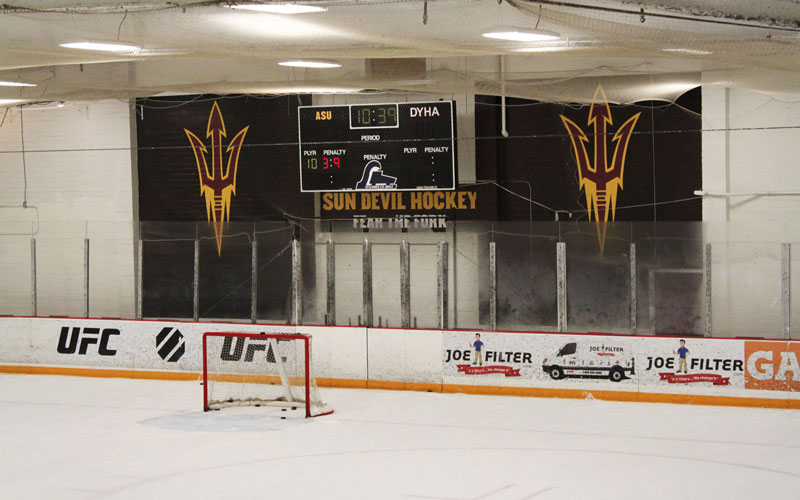 Oceanside Ice Arena’s scoreboard was improved and additional signage was added around it. (Photo by Allyson Cummings / Cronkite News) 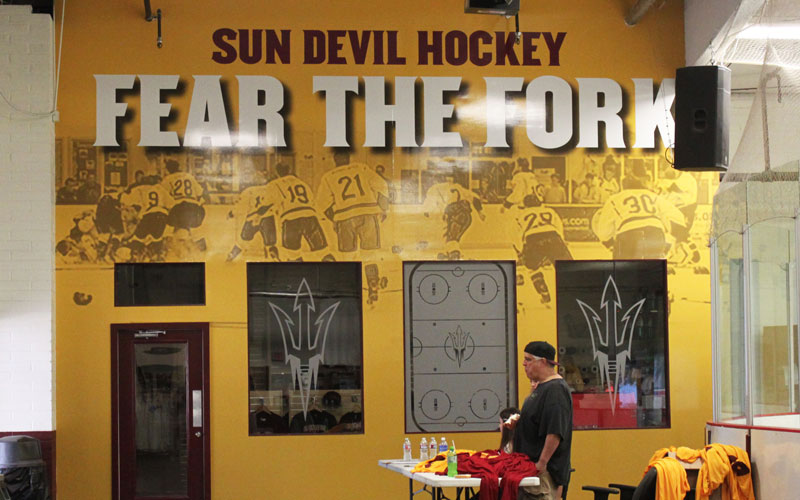 Arizona State’s hockey team is playing its first season as a Division I program. The Sun Devils will play 11 home games in Tempe. (Photo by Allyson Cummings / Cronkite News)

TEMPE – Nine months after the Arizona State University hockey team announced its move to NCAA Division I, a $250,000 renovation of its home rink, Oceanside Ice Arena, has been completed in time for the team’s first varsity season. The long-term plan is to move to a bigger arena, but the beneficiaries of the renovations go beyond the Sun Devils.

“These are renovations that this rink needs whether ASU is here or not,” said Adam Mims, executive director of Oceanside Ice Arena, an independently owned rink. “I mean we are 40 years old and so these are things that we need to do, these are things that benefit all of our customers for many years. So it’s definitely not a shortsighted deal.”

Oceanside Ice Arena is also home to two Division II ASU hockey teams, youth hockey leagues, adult leagues and figure skating, all of which share ice time throughout the week. ASU is scheduled to add a women’s American Collegiate Hockey Association team in 2016, a part of the deal to move the men’s team to the Division I level. With so much activity at the venue, Mims does not foresee much financial impact following Arizona State’s eventual move to new home ice.

“Since we only have one sheet of ice, all that will mean is that the ACHA teams will have better game times, the women’s team will have more ice available to them, so revenue-wise we will be the same,” Mims said.

ASU varsity hockey reserved weekly practice time at Oceanside Monday through Friday and for the 11 games it will play in Tempe this season. But Mims understands Arizona State’s likely future departure, and it is something the rink’s management team fully expects and endorses.

“We were certainly never under the impression that we were going to be their home rink for games,” Mims said. “An NCAA program deserves a proper arena and we want them to get that built right away.”

Both Arizona State and Oceanside helped to cover the cost of the renovations. Arizona State paid for branding elements such as Adidas logos and other ASU-related signage, as well as upgrades to the locker room. Oceanside paid for other features, including everything from infrared heating on the bleachers to new boards on the north side of the ice.

“Oceanside has a management staff that has always done a tremendous job and looked after the place very well,” ASU hockey coach Greg Powers said. “They felt they needed the upgrades to maintain a place that an NCAA team could practice at.”

In edition to their 11 home games at Oceanside, the Sun Devils will play two home games and host a tournament at Gila River Arena in Glendale this season, including their first game as a Division I program Saturday against the University of Arizona.

Beyond their current jobs, Powers and Mims are both personally invested in helping ASU hockey. They both played for the maroon and gold in the past.

“(Powers) came to the team in 1995 and that was my last year. He was the stud new freshman goalie that pushed me right out,” Mims said, laughing.

“I’ve known Adam for a long time,” Powers said. “I think for about the first 10 years I was in Arizona, he didn’t like me very much. He was a senior when I was a freshman and he had a disk issue in his back early in the year allowing me to start the first third of the season. By the time he was healthy I guess I was doing well enough he didn’t get his spot back.”

Powers said their relationship is strong now and they work well together. This benefited the renovations over the summer-long project that Mims joked he lost sleep over.

“The most complicated aspect is anytime you are doing work inside of a rink and staying open, you have to consider ice conditions,” Mims said. “This isn’t a normal construction site where you can have doors open and where you can affect your inside ambient air temperature. That’s the biggest challenge, is we’ve got contractors in here who have never worked in an ice arena and they don’t understand that it makes all projects more difficult.”

The majority of the construction was completed in the summer. New bleachers were installed in September.

“Ninety-nine percent of the people are really positive about it,” Mims said. “I’m sure it’s been slightly inconvenient this summer. We try to be as considerate as possible and keep the construction and renovation on a schedule that doesn’t interfere with too many people.”

The new seating allows for up to 750 people. Before the renovations Oceanside only accommodated 300. On top of that, the penalty box used to be on the south side of the rink, which obstructed a large portion of the view for fans who looked through two sheets of glass. The penalty box has now moved to the north side.

“I am totally emotionally invested in this place,” said Mims, who is excited to see the team play its first varsity game at Oceanside on Oct. 23 against Southern New Hampshire University.